If you only read the headlines, it might seem like Mercedes-Benz is upshifting away from its classic division. The profits of its world-record sale of the 300 SLR Uhlenhaut coupe, as first reported on Hagerty Insider, are earmarked for scholarships for work in environmentally focused automotive technologies. Elsewhere, Mercedes continues to severely shave down its ICE portfolio in favor of its flourishing EQ family tree. It’s only logical to assume there’s no room in this anodyne future for the smoggy, seepy cars of the Mercedes-Benz Classic division.

A recent interview—and ridealong—with MB Heritage head-honcho Marcus Breitschwerdt indicates otherwise. Breitschwerdt is a longtime MB executive who transitioned from Mercedes-Benz Vans to head-up the Heritage program at the end of last year, now overseeing the expansion of a division that chairman of Mercedes Group and CEO of Mercedes-Benz Ola Källenius calls in a release a “strategically important area” of the company.

The future remains uncertain for classic car enthusiasts—heck, for automotive enthusiasts of all types—but not at Mercedes. As the automaker continues to inch its brand even further up the echelons of luxury, its classic division will apparently take on a greater role elevating the brand and attracting more ultra-wealthy clientele. Here’s what Breitschwerdt had to say at the grand opening of the new Mercedes-Benz Classic Center in Long Beach, California.

Q: So, the 300 SLR Uhlenhaut sale. Tell us about where the proceeds from will go, and what’s it mean for Mercedes-Benz?

It’s called “Mercedes-Benz Fund,” and the purpose is to give young people from all over the world who have the talent, but do not have the resources to get the education they should have. It gives them the opportunity to get a proper university education in the field of environmental technology linked to the automotive industry.

And, it’s not that we just support them getting the university education, but we mentor them. People [in the company] like myself will serve as mentors to these people as they get internships with the company. We help them to find their way.

Why we are doing this in the first place is also important. Of the three relevant founders of our corporation— Gottlieb Daimler, Wilhelm Maybach, and Karl Benz—only two of them could escape their very limited life conditions as young people by having been supported from the outside.

Gottlieb Daimler was the son of a small-time baker and wine merchant close to Stuttgart, and they couldn’t afford any sort of education other than to send him two doors down in another house to work as an apprentice at a gunsmith. He still had to work and live with his parents at their home.

He did so well as a gunsmith’s apprentice, the government gave him an award to study at the Stuttgart technical university. Later on, he had two further scholarships to go study in France and England to work at a locomotive apprenticeship. At that time, middle of the 19th century, [England] was the Silicon Valley.

He brought that knowledge back with him to Stuttgart, and started a machine shop near his home, which was supported by the church. A young orphan named Wilhelm Maybach worked there in the shop, and Daimler supported him in the same way he was supported.

We created this fund with this heritage in our mind, and it’s why we have decided to sell off one of the two Uhlenhaut coupes.

Q: Is the sale of one of Mercedes’ crown jewels of internal combustion a sign of things to come?

We are most certainly living in a time of unbelievable technological transformation, so you have to consider the electrification of the car, and the era of carbon-free driving that’s coming. And you have connectivity, and both are breakthrough technologies. And, we certainly believe we will be a driving force in this change, as we have been through the entire history of the industry.

If you go through our history, it is a luxury company built on the foundation of technologic innovation.

Q: What is the future of Mercedes Classic as it relates to the oncoming EV revolution? How do cars from the EQ family fit into the future classics? Will Mercedes follow some automakers in electrifying their classics?

Well, we are at the moment considering what the options are. First of all, I believe that e-fuels will offer you a fantastic perspective to operate classic cars as they are. You just have to change a few pipes and tubes, and the e-fuels—which are carbon-free—will work perfectly well with the cars as they are.

Classic cars have three dimensions, in my opinion. On the one hand, it’s the top-notch on the luxury pyramid. There are very, very few new cars as expensive as many classic cars are. So, it’s top-luxury. Second, they are also fun to use and fun to drive. Third, it’s heritage, it’s a cultural result. It has to be handed over to the next generation as-is, just like the London Tower, the White House.

You wouldn’t tear those significant buildings down and re-build them to new standards and new style. You’ll just maintain it as it is, and keep it as original as you can. I think this is the right way to approach classics.

Q: So, you cannot foresee a time when Mercedes does not have a Classic division?

It’s the other way around, actually. We do believe decade after decade, the Classic division will grow, as tomorrow’s cars will be the classic cars forty, fifty years from now. We are a brand-driven corporation. A brand means you build something around values.

Q: What are some of the biggest challenges facing the classic car industry, both from a market and technological perspective?

We are certainly linked to the future. So, there is no such thing as an “isolated” classic car market. It’s part of a history, and a history has a start, but doesn’t have an end. You link it to what comes next, and it’s what you’re proud of.

I think the heritage industry has to demonstrate to society that sustainability also means to maintain a classic car. Because, you don’t have to do any mining for the car, or production. The car is already here, to a certain degree. And, [most] classic cars aren’t driving 10,000 miles a year. They only go short distances usually, and are well kept and well treated by their owners. They’re great responses to the environmental challenge, and will be a great way to deal with it.

This is also why I believe in e-fuels. It’s going to be a great way to drive these cars carbon-free.

Q: Is Mercedes-Benz a major investor in the ongoing e-fuel development?

We are currently linked to all of the major initiatives. Before you rip-out the historical engine in a 300SL, and you put in a modern electric motor, you should consider other carbon-free ways to preserve it as a testimonial.

Also, for the future, certainly our classic industry will grow. Today’s car will make wonderful classic cars. A lot of people tell me, “Oh my goodness, nowadays’ cars will make terrible classics.” That’s all baloney—they will! We are very keen to hand them over to the next generation, and the generation after. That’s the responsibility we have.

The business we do today with classic cars, was created by people ages before us. They not only developed the cars, and then sold and used them. Another generation later, other people in our lineup collected them. We are creating cars now that people 30 years from now will have to deal with, and we have to look at every new car through the lens of a heritage and classic perspective, and how we’re going to have to deal with that in the future. 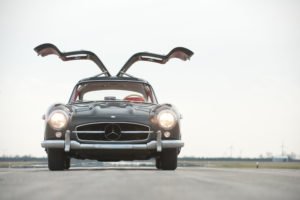