The dust has barely settled from January’s mega-auctions, but it’s already March. And that means it’s time for the calmer, more curated sales in Amelia Island. Just three auctions are on the schedule in Amelia this year, but they are nevertheless packed with important cars, including some mouth-watering Porsches and significant race cars. Although we’ll be watching everything in Amelia this year, some cars are standouts for their significance to the market, their significance to history, or just because they’re downright interesting. We’ll be watching those even closer, and here are eight of them.

The auctions kick off later this week. For live updates from the ground, follow us here.

Even though it was an unusual downmarket move for a fancy firm like Aston Martin, the V8 Vantage was arguably the company’s best car in the 2000s. Its riveted and glued aluminum frame, 4.3 (and later 4.7) liter V8, and 6-speed transaxle gave it solid performance credentials. And its looks were classic Aston, somehow managing to be both fresh and familiar at the same time, retaining that essential Aston-ness that never goes out of style.

The V8 Vantage started in the low-$100,000 range when it was new (about Porsche 911 territory), but like most modern Aston Martins it sank like a rock once it left the showroom. It has the ingredients of a modern driver-focused collector car, though, and we’ve speculated before that it is poised for appreciation. Condition #2 values are up 11 percent over the past three years, and we’re watching this Vantage to see if there’s still more room to grow. Its a rarer, later, more powerful 4.7-liter version with the desirable 6-speed stick, represented with just 953 miles, and according to Gooding & Company it is believed to be the only one in this color combination of Stratus White over Spicy Red leather.

Pinin Farina (shortened in 1961 to Pininfarina) is best known for styling many all-time great Ferraris, but the consummate carrozzeria has done work for all the great Italian marques and even some foreign ones like the Chevrolet “Rondine” concept car or the Nash-Healey. PF even hand-built the 1959-60 Cadillac Eldorado Brougham at its home base in Turin. That said, this Jaguar is rather unusual. It’s reportedly the only XK120 to ever wear Pinin Farina clothes.

According to Bonhams it was displayed at the Turin Motor Show in 1955 and at Geneva in 1956 and was “quite likely” built for prolific New York importer Max Hoffman. Records about the car aren’t complete, but it was restored to concours condition in the 2010s. As a unique coachbuilt sports car it’s right at home on any show field.

Collector cars of all shapes and sizes are getting more expensive lately. That’s no secret. Even in that context, though, the Porsche Carrera GT’s upward charge is remarkable. Sub-$1M cars just a couple of years ago, they have approached and even surpassed $2M in recent months. Since August 2021, the record auction price for the model has been broken four times.

Amelia will give us an opportunity to see if the Carrera GT is still rising. Gooding & Company’s example is precisely. the type that could set a record: It has reassuringly low mileage (2400 miles) and some rare options, including a paint-to-sample finish. That makes it one of reportedly 19 paint-to-sample Carrera GTs sold in North America.

Paying the extra coin for paint-to-sample and still choosing silver seems a bit like springing for Johnnie Walker Blue and then mixing it with Diet Coke. That said, this car’s special Polar Silver finish has more blue in it than the standard GT Silver seen on other Carrera GTs, and that subtle difference could be a big boost when this car crosses the block in Amelia.

As in-person auction companies adjust to a new normal in which online competitors can move seven-figure consignments—usually with lower fees—one niche might be prewar cars. Most (though not all) buyers of 80+-year-old vehicles will want the benefit of an in-person inspection. Sure enough, prewar cars make up nearly a quarter of consignments at Amelia this year. Among the most notable is RM Sotheby’s 1934 Packard Twelve. Represented as one of just three known surviving cars with the Dietrich Individual Custom Convertible Victoria (try saying that five times fast) bodywork, it was last restored in the 2000s by the specialists at Stone Barn in New Jersey and won its class at Pebble Beach in 2014.

We’ve argued before that prewar cars, a cornerstone of the hobby, are doing just fine even in a rapidly changing collector car market. This Packard will provide a heat check for high-end prewar cars, which don’t often pop up for public sale.

Among the last analog Ultimate Driving Machines and truly beautiful in that clean, understated BMW kind of way, the E46 (2000-06) M3 is another car that has appreciated significantly during the 2020s. Condition #2 values have increased 35 percent over the past three years, and the cleanest examples are worth well more than their original $45k MSRP.

They might still be growing. Gooding’s estimate for this M3 is remarkably high at $70k-$80k, but it’s also a remarkably clean car. Its 16,000 miles hit that sweet spot of low but not too low, and it has been consistently serviced. The color, Laguna Seca Blue, is also the best shade ever sprayed on an M3. This is not up for debate.

Not including cars sold for charity, the most expensive Japanese automobile ever sold at auction is a factory-raced and Le Mans class-winning 1989 Mazda 767B sold for $1.75M back in 2017. This Toyota just might topple that record.

The 2000GT is already a piece of JDM royalty and among the most valuable cars to ever roll out of the Land of the Rising Sun, but this one has racing bona fides to set it apart from the rest. The first serial-numbered 2000GT – MF10-10001 – it is one of three 2000GTs prepped by Shelby (yes, that Shelby) to take on the Porsches, Lotuses and Datsuns in SCCA C-Production racing. In making the Svelte Yamaha-powered coupe track-ready, Shelby fitted special exhaust, Girling brake calipers, Halibrand magnesium wheels, adjustable KONI shock absorbers, and a diff cooler. While it didn’t prove to be a champion, the Shelby-Toyotas were highly competitive and racked up numerous podium finishes.

The consignor has owned the car since 1980 during which time it was restored to its original 1968 SCCA specs. Neither it nor its stablemates have ever been offered for public auction; as we noted at Pebble Beach, this tends to count for a lot among top-tier collectors. Both the Shelby connection and its importance to Toyota history make this one of the most exciting auction offerings anywhere so far this year.

When Porsche developed an evolution of its 944 S2, the designers realized that more than 80 percent of the parts were new. That warranted a new model designation—968. It would be the very last (plus quickest and most developed) of the four-cylinder, water-cooled transaxle Porsches that went all the way back to the 924 of 1976.

Like nearly everything with a Porsche badge, 968s got a lot more expensive in the 2010s. In fact, they’re worth about three times what they were 10 years ago. We nevertheless feel they’re undervalued, and put it on this year’s Hagerty Bull Market list.

That’s why we’re watching the one on offer in Amelia. A Japanese market (but still left-hand-drive) car, it has significant mileage at 70,784 km (43,931 miles) but looks remarkably clean and is finished in the lovely, rare color of Riviera Blue. It also has cloth seats with a Porsche script pattern on them, which are just so much cooler than the leather buckets you see on most cars.

Even with all the talk of ballooning values and crazy prices, this is the year’s first eight-figure auction car and the most valuable offering in Amelia. By a lot. If you’re wondering why it’s so valuable, well, just look at it.

If you’re still not convinced, consider that it’s one of only 10-12 Teardrop Coupes (or Goutte d’Eau for you Francophiles) built on Talbot-Lago’s top spec T150-C-SS chassis. The firm responsible for this rolling sculpture, Figoni et Falaschi, is one of the most respected and sought after coachbuilders ever, and the Teardrop coupe is widely regarded as Joseph Figoni’s magnum opus. This car, chassis 90107, is also represented as the only example of the Modéle New York design (distinguished by the enclosed front fenders) that survives today unchanged. Gooding calls it “the pinnacle of the French school of streamlined styling.”

Eight-figure cars are a rare sight at the Amelia Island auctions. The last one to cross the block there was a Jaguar XKSS that failed to sell five years ago, and the only one to actually change hands was a Ferrari 250 GT SWB California Spider sold for $17.16M in 2016. 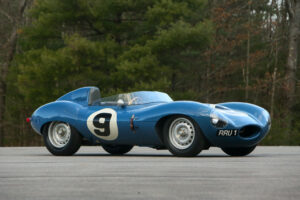 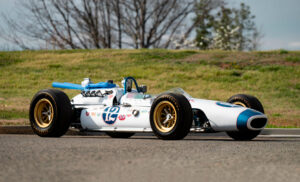