Fatal Attraction: Three British beauties that are cheap to buy, expensive to own

It always looks so tempting in the classifieds. A high-end classic you could only dream of buying when new, now for sale for used VW Jetta money.

Of course, it isn’t that simple, is it? If buying a high-end, sporty status symbol for family sedan money sounds too good to be true, that’s because it is. Some cars are cheap to buy because they’re so darn expensive to own and maintain. That’s especially the case when the car in question is—what’s a nice way to say this?—from a lovely island off the coast of Normandy.

As we’ve been updating the Hagerty Price Guide over the past several weeks, three modern British cars we track in particular stood out as still having surprisingly low values. But even though they might get your heart racing on the computer screen, they will probably break it once that first service bill comes in. To be clear, we’re not advising anybody to avoid these cars. Just know that the budget to own one is about more than what it says on the bill of sale, and don’t think you can get away with just changing the oil and spark plugs.

Although the XJ-S was never meant as a direct replacement for the E-Type, its place in Jaguar history is as the E’s disappointing follow-up. When the XJ-S coupe was introduced in late 1975, few people fell in love with the oblong headlights or flying buttresses, and a thirsty 5.3-liter V-12 seemed a little out of place when a fuel crisis was still fresh on everybody’s minds. Jaguar nevertheless sold 115,000 XJ-Ss over the course of two decades, and the XJ-S was as much of an ’80s status symbol as a Mercedes 560SL. It’s a fine, comfortable, fast grand tourer when running right, and its looks have arguably aged quite well.

Jaguar made constant updates to the XJ-S to keep it competitive. A revised combustion chamber for the HE (High Efficiency) engine arrived in 1981, resulting in more power and fuel economy. A targa-type convertible arrived in 1983, along with a new 3.6-liter straight-six engine called the AJ6. A full factory convertible arrived in 1989. With Jaguar under full Ford ownership in 1991, the XJS (now without the hyphen) got a major facelift, with the six-cylinder punched out to 4.0 liters and the V-12 to 6.0 liters (in 1992). The inboard rear brakes also moved outboard, a new GM automatic transmission was added, and major body panels were galvanized for better rust protection. There were tons of smaller updates along the way.

Today, despite rust, neglect and the occasional crash having taken many XJ-Ss off the road, the model’s long production run and steady sales mean that there are a lot of them still out there. And, after the Jaguar XJ-12, an XJ-S is the cheapest car with a 12-cylinder engine in the Hagerty Price Guide.

After E-Type values skyrocketed in the mid-2010s, XJ-Ss started to follow suit. Over the last five years condition #2 (Excellent) values are up over 50 or 60 percent for some years, but the median #2 value for a V-12 XJ-S is still $27,600. For #3 (Good) condition cars it’s just $13,600. Some Jaguar experts will advise you to buy a six-cylinder XJ-S because it’s just as stylish, almost as smooth, and plenty quick enough as well as way simpler to keep running. Because of that, six-cylinder values are within 2 to 5 grand of the equivalent 12, depending on year and condition.

That said there’s just something about a V-12 that’s irresistible.

Any XJ-S is rust-prone, and rust repair is never cheap. Jacking points, sills, rear wheelarches and floorpans are trouble spots on early cars, and even though the post-1991 facelifted cars are galvanized, they aren’t immune. Rot around the windscreen scuttles is common on those. Getting at the rear suspension is difficult since it’s housed within a subframe along with the differential, and inboard rear brakes are of course always a headache to work on, in the Jag’s case sometimes requiring the rear of the car to be dropped.

Being an old British car, an XJ-S can also have electrical gremlins living in there full time, with things like power windows or mirrors and air conditioning systems being common failures. The wood veneer trim on the interior can dry out and crack as well.

As for the (usually) silent and silky smooth V-12 under the hood, specialists say it is a perfectly robust and reliable unit if it has been fastidiously maintained. A big if. Very few XJ-Ss have led a pampered life over the past 25-45 years. The top of the engine bay in an XJ-S is a labyrinth of wires and vacuum lines. It doesn’t help that the V-12 tends to run hot, and that leads to drying, cracking, and fraying. Coolant needs to be replaced every two years.

A lot of parts are available, including from Jaguar Classic, but many are tough to find as well as expensive, and plenty of beached XJ-Ss are cannibalized for components. All of the above means that four-figure shop bills for body work and mechanical servicing are common, and that hurts when we’re talking about a $15,000 car.

The DB7 actually owes part of its existence to the Jaguar XJ-S above. Much of its design dates back to a proposed replacement for the XJ-S that was canceled at the beginning of the ’90s, when both storied brands were owned by the Blue Oval. Aston then repurposed it for its latest model and had Ian Callum and Keith Helfet pen what turned out to be one of the nicest shapes of the decade. In addition to the Jaguar DNA, and thanks to a tight budget at Aston Martin at the time, there were also Citroën mirrors and Ford switchgear. The interior door handles are, believe it or not, from an NA Miata. But despite the parts bin bits and a six-figure price tag, the DB7 was a success. Autocar proclaimed that it was “re-establishing Britain at the cutting edge of specialist car making,” and Aston sold about 7000 DB7s, making it the company’s best seller to date.

Today, a DB7 is the cheapest way to get your Aston Martin wings. Condition #2 values for a DB7 range from $28,000 to $45,000 depending on engine and body style (add 25 percent for a stick shift), and the DB7 market has looked that way for quite some time. The median condition #2 value is within a few hundred dollars of where it was at the end of 2009, which is a bit surprising given what has happened in the market for other sporty 1990s and 2000s cars lately. DB7s arguably have room to grow (we even put them on this year’s Hagerty UK Bull Market list), but the realities of servicing a DB7 start to explain why it can be had at bargain prices.

The first DB7s came with 3.2-liter Eaton supercharged version of Jaguar’s AJ6 straight-six (the one also found in the XJ-S). Leaking oil coolers and failing timing chain tensioners are problem areas on those. The 5.9-liter V-12 that debuted in 1999 has a reputation for overheating, and needs coil packs every three years. Electrical failures are a common and expensive fix, and as DB7s get older, unique parts from a low-volume manufacturer like Aston Martin are going to get tougher to find. Bringing a DB7 to a specialist or dealer (which aren’t on every street corner) can be $1500 just for a routine service, and that’s assuming nothing goes wrong. Needless to say, that’d be an unwise assumption.

Introduced in 1985 (1988 in the U.S.) as a replacement for the Mulsanne Turbo and available in short or long wheelbase, the Bentley Turbo R mainly differed from its predecessor in its much-improved suspension. The R stands for “roadholding,” not “race,” but the suspension allowed the Turbo R to be a competent performer when it wanted to be and not just a plush cruiser. Being a Bentley, though, it was still plush. Acres of Connolly leather and real wood, plush carpets, the usual stuff.

And with a median condition #2 value of just $22,600 (Turbo Rs were closer to 200k when new) for such a hand-built, V-8, turbocharged, 5400-pound brick of English magnificence, how could you not be at least a little bit tempted? Bentley sold more than 7000 Turbo Rs so they’re relatively common by pre-Volkswagen-era Bentley standards and not that difficult to find, plus low mileage is relatively common.

But as with any Rolls-Royce or Bentley, owning a Turbo R isn’t for the faint of heart or wallet. Cars with ride height control need a specific fluid that runs through both the ride height and braking systems. Curiously, the Turbo R also uses a specific size of Avon tire, the going rate for which is $500 each. As for the tightly-packed engine bay that houses the 6.75-liter turbocharged V-8, head gaskets are becoming a common issue as the cars get older. If a head gasket fails and damages the engine, factor in a five-figure bill just for the labor it will take to fix it. As with the Aston Martin, Rolls-Royce/Bentley specialists can be few and far between, and even just a routine trip to one can be over a grand even if nothing major needs fixing.

Even taking all that into account, it’s still easy to daydream about buying a Bentley (or Jaguar or Aston Martin) for Mustang money, but don’t say we didn’t warn you.

[For the record, Newton owns a Lotus.–Ed] 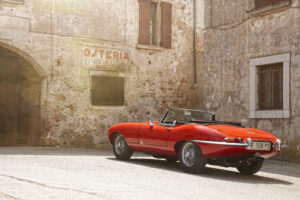 Not fade away: Jaguar E-Type values are making a comeback

The XJR-15 is the coolest modern Jaguar. At Monterey, you'll be able to buy two of them.
A story about
Aston MartinBentleyBritishJaguarYoungtimer