The Pebble effect: Measuring the loss of the Monterey auctions

With the announcement last week that the Pebble Beach Concours d’Elegance would be canceled for 2020, other events of the week followed suit, including many auctions. There’s no doubt this will hurt the market. The only question is how bad it’ll be.

As the Monterey auction sales account for between a quarter and a third of the total annual auction sales in North America, the hole in the market will be large. Surely, some of that revenue will be made up by other auctions, including online sales (RM Sotheby’s has already announced it’s holding an online auction mid-August).

But even the best online platform won’t be able to replicate the unique aura of the Monterey Peninsula. From vintage racing at WeatherTech Raceway Laguna Seca to the concours on the 18th fairway—and the numerous supporting events in between—the combination of elite cars and affluent people who appreciate them creates an environment ripe for high-dollar auctions. The average price for a vehicle sold here since 2008 has been close to $380,000, and the auctions maintain an average sell-through rate of 63 percent. The peninsula’s status as the place to buy and sell the world’s most desirable automobiles almost guarantees that, in its absence, a couple of years will pass before any big records are set.

The Monterey auctions also stand apart from others, even those in Scottsdale, for the global nature of the crowd. In 2019 alone, at least 50 cars worth a total of about $25 million were shipped to the peninsula from abroad, and another $25 million worth of vehicles were bought on-site and then shipped to other countries. Global trade in classic automobiles, already grinding to a halt on account of border closings amid the pandemic, will be further impacted by the fact that people and vehicles from all over are no longer able to congregate on this small strip of California coast.

A market without Monterey Car Week 2020 will thus be much smaller and much quieter. It could, however, benefit from this unexpected break. As we discussed at length in issue 5 of Insider, 2019 was a disappointment by Pebble standards, with drops in total sales and sell-through rates. There were many reasons for the dip, but most boiled down to “too many cars, too many auctions.” Of course, we never dreamed of the circumstances we now face and, like everyone, would be happy to go back to what we thought were problems in 2019. Nevertheless, if you’re looking for silver linings, here’s one: A market with fewer auctions might be better off in the long run. 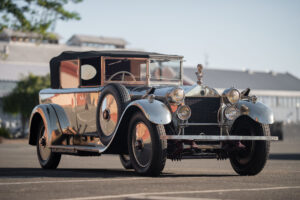 9 oddballs keeping it weird at the 2022 Monterey auctions