Conventional wisdom holds that R33 Skyline GT-Rs are less desirable compared to the earlier R32 and later R34. There’s a certain logic to this thinking. The R33 (running from 1995–1998) is larger, heavier, and is arguably less hardcore than the R32. The aggressive-looking, tech-packed R34 that succeeded it is much more coveted, viewed as a more finalized expression of the model lineage. But nobody should write off the R33 as a mere stepping stone from one great GT-R to the next, not least because one of the greatest-ever Skylines was cut from its cloth. Even with its additional size and heft over the R32, the R33 still managed to lap the Nürburgring in under 8 minutes—a first for a regular production car. Not content with that achievement, Nissan Motorsports International (NISMO) homologated the R33 for racing at Le Mans, although it proved only moderately competitive. This push to compete at Le Mans spawned one of the greatest JDM performance machines of all time—the NISMO 400R.

Anything from NISMO tends to have a big collector following, but the 400R is not the first Skyline to wear the NISMO name. The badge first appeared on the R31-series 1987 Skyline GTS NISMO, and then again on the R32-based 1990 Skyline GT-R NISMO. The 1990 GT-R NISMO is especially notable from its connection to Group A racing. Nissan produced 560 of these cars for homologation and competition by removing the ABS and rear wiper then adding items such as additional aero, body kit, and a set of upgraded turbochargers—however the horsepower rating would remain unchanged. That next evolution from NISMO, however, would take the base Skyline GT-R up several notches and into supercar-level performance.

Built for the late-1996 and 1997 model year, the 400R is not only the ultimate R33 GT-R, but arguably the most technologically advanced road-going Japanese sports car through the end of the millennium. When you consider the vast resources at NISMO’s disposal, stemming from its role as motorsports and in-house performance arm at Nissan, the scope of modifications and improvements to this halo of a halo car begins to make sense. Certainly a crucial element of the 400R was its upgraded RB-X GT2 engine, based on the RB26DETT lineage, but NISMO did not neglect the chassis either. In addition to a 30mm (1.8 inch) lower ride height, Bilstein dampers, and NISMO springs were NISMO Type 2 brake pads and a unique brake master cylinder designed with a stopper reduce fore/aft movement and thus improve pedal feel.

“As far as collectible Nissans go, for most the 400R probably falls right behind the R34 Z-Tune” says Brian Jannusch, Sales Director for Toprank Importers in Cypress, California. Jannusch is responsible for importing the first 400R into the United States this fall. “To a savvy collector. It’s arguably in first place. Unlike the 400Rs, the Z-Tunes were not real production cars but R34 GT-Rs pulled from the wild and brought back in to be made into Z-Tunes. If rare production vehicles are your thing, the 400R is the one.” How rare, exactly? NISMO claims 44 produced, however 40 have been positively verified to exist by GTR-Registry.

At the time, Japanese sports cars adhered to a gentleman’s agreement between the major auto manufacturers to “limit” power to 276 horses. In many cases this was true only on paper, but NISMO’s 2.8-liter RB-X GT2 engine proudly produced 400 horsepower. The engine, by the way, is far more than just a “stroker” RB26. The block is reinforced, has special, forged internals and freer flowing intake and exhaust. But looking at what else was on the market in the late ’90s that made this sort of power, the list is pretty small. A Corvette ZR-1 is in the same ballpark, but you’d have to consult top-shelf offerings from Ferrari, Lamborghini, or McLaren to get much more grunt.

Speaking of those big names, the 400R has a lot more in common with supercars than you may think, at least with regard to materials technology. While use of carbon fiber is fairly common (and relatively affordable) today, in the 1990s it was exclusively used in high-end exotic and motorsport applications. Again borrowing from NISMO’s Le Mans program, the car is dripping in the stuff. The most notable beneficiary here is the carbon-fiber LM hood, but it’s CF’s use in other areas that really show how dedicated NISMO was to saving weight. The 400R’s driveshafts, made carbon fiber, save 50 percent of the weight of a steel shaft, coming in at 7.7 kilograms according to NISMO. From Jannusch’s perspective, it’s not just the material itself but the careful and precise use of it that’s most impressive; the carbon-fiber intercooler air guide, for example, fits perfectly in the space between the bumper and intercooler. NISMO wasn’t shy about using titanium, either. In fact, the high-flow exhaust (a fully dual system ahead of the muffler) is made totally of the lightweight metal, including the exhaust manifolds. The strut tower bar is made of titanium, and even the shift knob is composed of it.

The 400R’s exterior also underscores its motorsports roots. The previously mentioned LM hood has a giant heat extractor, channeling hot air from the intercooler and radiator out of the engine bay. A specially designed front bumper also provides additional cooling by directing air to the intercooler, radiator, brakes, and oil cooler. A full body kit cuts a more aggressive profile than the standard R33, and it’s all legitimately functional; the flared fenders are necessary to accommodate the wider three-piece Rays NISMO LMGT1 wheels, and side skirts create a more uniform flow for the body lines. Even the carbon-fiber double wing out back provides additional downforce. Yet despite the copious performance hardware, the 400R remains a drivable, usable sports car in the same vein as the garden-variety R33.

That said, JDM fans put the 400R on a pedestal for a reason. “For the 400R, it is all in the details,” says Jannusch. “If you can appreciate that, you can easily understand why so many R33 GT-R owners aspire to style their cars similarly.” Die-hard GT-R enthusiasts do indeed emulate the 400R by building tribute cars, but don’t think that you can easily just go out and make one of your own.

“Unlike many other specialty production Japanese cars, the 400R had quite a few parts that were never available for individual sale, which makes creating a replica near impossible,” Jannusch explains. “Parts such as the over-fenders, front bumper, double-wing rear spoiler, LM carbon hood, and RB-X GT2 engine have become incredibly coveted. Aside from getting them off of a real 400R, there’s been no other way to source them.”

Naturally, when 400R parts do emerge into the marketplace, they command top dollar. A set of LMGT1 wheels are among the easiest such parts to come by, but the floor is $7000 for a decent set. The titanium strut brace? One recently sold for over $9000. Thus the barrier to building a detail-correct clone. If you’re lucky enough to track down a real 400R, don’t expect sellers to be readily willing to part with theirs. This is a holy grail car for JDM fanatics the same way a Hemi Cuda Convertible is for muscle heads or a Ferrari 250 GTO is for Euro enthusiasts. Much like any other blue chip collector “having access to a car like this is a lot about relationships. Sometimes months or years of communication with the owners to let them know you’re a serious buyer. Knowing where the cars are even when they are not for sale, knowing the market, and having the reputation of being ready to move on the car as quickly and efficiently in order to simplify things for the seller are a big part of that also.” says Jannusch.

The 400R currently in residence at Toprank is the tip of the spear. In the United States, we are just beginning a trickle of such halo cars from the golden age of Japanese performance making their way across our borders. Meanwhile, since day one, major collectors outside the U.S. who have had access to cars like the 400R (or the R34-based Z-Tune) have been snatching them up and holding them close as collection centerpieces. As more cars of this ilk begin to reach the legal age for import, expect to see more American collectors lining up for a chance to own them, whether that means buying directly from Japan, Australia, or from savvy importers in Canada, or from elsewhere since the draw for these cars is truly global.

All that said, the 400R is in a league of its own, and once the car finishes its stop at Toprank (sorry folks, it’s already sold), we don’t expect the opportunity to bask in the glory of such an important JDM icon to present itself again anytime soon. Its mere presence here in America—a market where no version of the Skyline GT-R was ever sold—speaks to the 400R’s global reputation as one of the most revered Japanese sports cars of its era. With any luck, the new owner will let it out once in a while to stretch its legs. 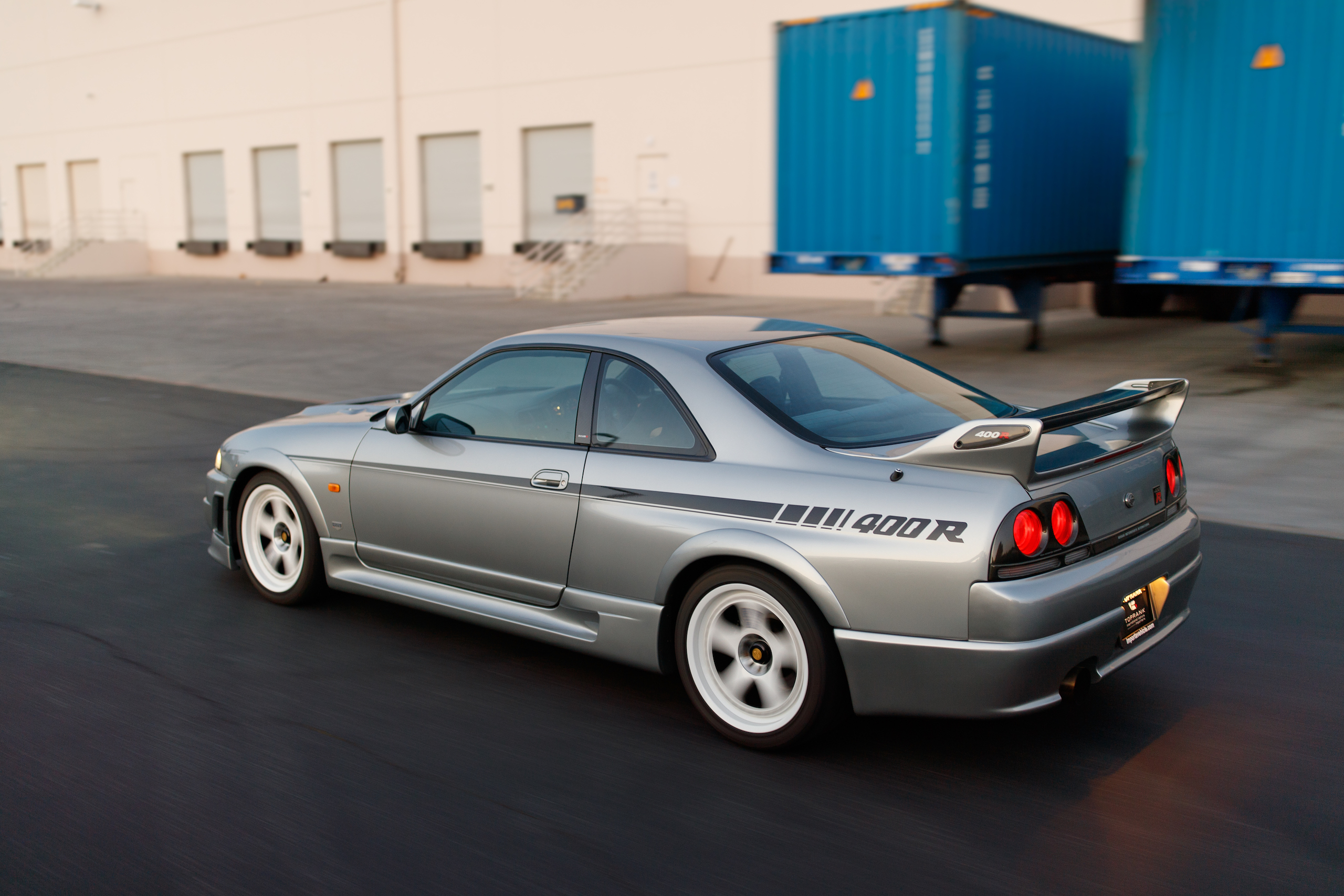 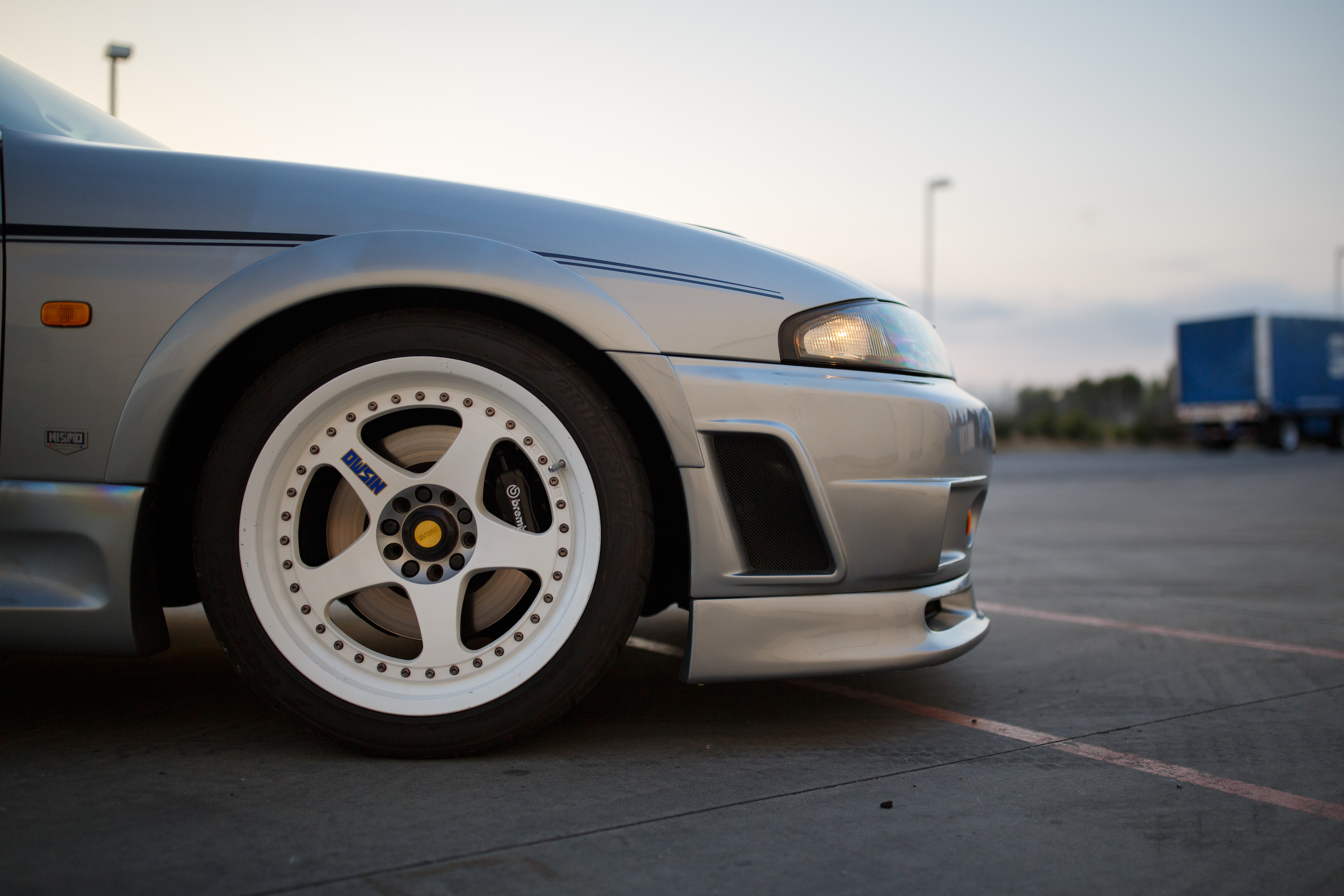 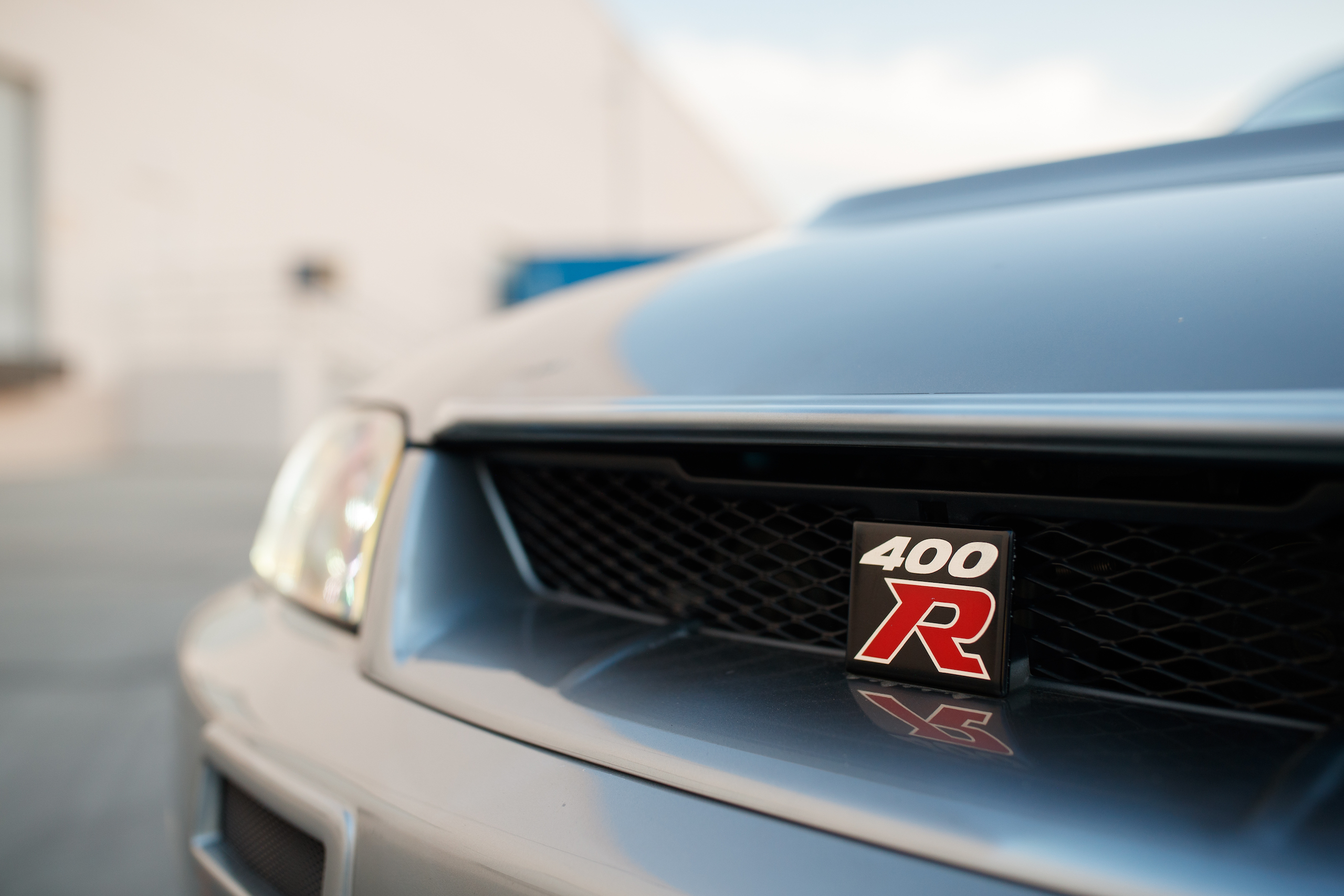 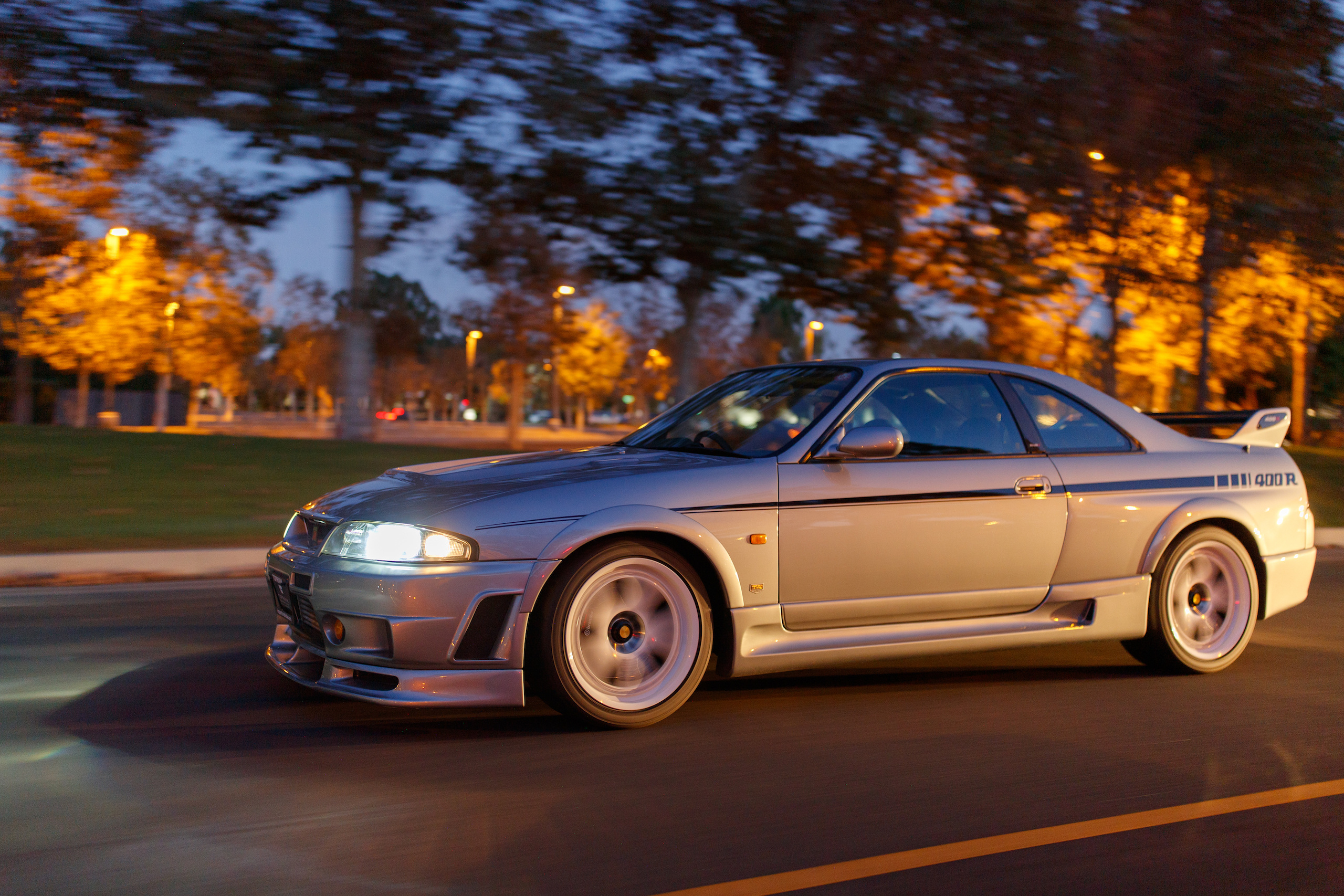