Will we leave the recession behind us in 2021?

John D. Stoll, former business columnist for the Wall Street Journal, reports on economic trends for Insider. You can read our primer on how these trends impact the collector car market here.

As people around the world prepared to ring in a new year, pictures of shots going into the arms of frontline healthcare workers provided hope that the devastation of 2020 would fade away in 2021. But the U.S. labor department, announcing in December’s final days that unemployment claims remain elevated, provided a reality check: No matter how quickly COVID-19 is eradicated, the economic uncertainty it created will remain with us for some time to come.

High unemployment rates and anemic job-growth numbers aren’t the only reasons we are reluctant to pop champagne corks. The Christmas season’s retail sales were underwhelming; for instance, purchases of big-ticket items have slowed and much of the service sector is shut down.

The crystal ball isn’t as dark as it seems, however. The Dow Jones Industrial Average, hit hard in the wake of the pandemic’s outbreak, has soared to all-time highs in recent weeks. The housing market remains vibrant. Prospects for additional financial stimulus from Washington seem secure—even if we need to wait for a new administration to get it.

The healthy-but-not-so-healthy storyline has dominated the pages of business and finance sections, giving readers whiplash and driving headline writers crazy. The New York Times’s Ella Koze recently summed up the confusion by charting nine economic measures that financial experts try to read when creating forecasts. When she mapped these indicators on a single chart, it created a tangled and confusing mess resembling the scribbles of a preschooler in a coloring book.

Why so murky? “Some of the most obvious indicators are in conflict,” she wrote.

Closer to home, the collector car market is likewise sending mixed signals. Auctions generally performed well through the fall and early winter— Mecum, for instance, reported a 79 percent sell-through rate at its December sale in Houston. On the other hand, Barrett-Jackson made clear 2021 would still be steered by the pandemic, delaying its blockbuster Scottsdale sale from January to March.

Even as conflict abounds, many economists and financial analysts are aligned on the expectations that the U.S. economic picture will perk up in the first half of the year.

“Clearly there are still risks, but most are betting that we have seen the worst of it.”

Georgia’s runoff elections this week, along with the inauguration of a new presidential administration later in the month, will provide more resolution on the political front. If kinks are worked out in the rapid distribution of vaccines, then disruptions hampering growth—including high shipping costs, lockdowns and business closures, and inventory shortages—could be behind us by the summer.

“Clearly there are still risks,” Jeffrey Kleintop, the chief global investment strategist at the Charles Schwab brokerage, told me. “But most are betting that we have seen the worst of it,” he said.

Kleintop said any economic outlook hinges on the assumption that the recovery will be “vaccine-led.” If the public-health crisis actually begins to recede in the first half of the year, the global economy will rebound to a growth rate of 5.2 percent in 2021 after a steep decline in 2020, he said.

If the push to vaccinate falls off course and lockdowns remain enforced, however, all bets are off. The worst-case scenario is for the U.S. economy to fall backward, delivering a potential double-dip recession where the recent recovery from the darkest days of 2020 ends and economic growth slips back into reverse.

Moody’s Analytics said further Federal economic relief—which president-elect Joe Biden said he will push for once he takes office—will ease a lot of stress. Extended benefits for unemployed workers, hefty checks for lower-income families, and support for struggling businesses will fuel a comeback. Moody’s and other analysts say without a new round of stimulus, ballooning state and local debt can’t be effectively addressed; teachers, police, and other municipal workers remain at risk; and many Americans will struggle to pay bills and meet rent commitments.

One short-term gauge of overall market sentiment is a volatility index, such as the “VIX” created by Cboe Global Markets (owner of the Chicago Board Options Exchange). This index is real-time, but is measured by the market’s expectation for risk and the sentiment over the next month or so. This type of tool is often called a “Fear Index.” If this measure is any indication, fear has subsided.

The VIX skyrocketed this spring, and spiked again when COVID-19 infections bubbled up over the summer and early autumn. The higher the VIX, the more dire the outlook. As of early November, that outlook was gloomy. But then the volatility index collapsed and remained near pandemic-era lows over the balance of the year.

In a survey conducted by Duke University’s Fuqua School of Business in late November and early December, chief financial officers said they were generally upbeat about the year ahead, reporting their highest level of optimism since 2019’s fourth quarter.

Low interest rates are buoying optimism, both for business and investors, and U.S. Federal Reserve Chairman Jerome Powell has gone to great lengths to reassure markets in recent weeks.

Historically, low interest rates create a much more active stock market. Foreign investors have been piling into the S&P 500, and there has been a proliferation of high-yield annuities to encourage investors to wade into a bond market that would be otherwise unattractive because of the low interest rates.

Moving Past A “Lost” Year

As always, it’s hard to know if optimism in the financial sector will trickle down to everyday consumers.

Richard Curtin, an economist directing the University of Michigan’s closely watched surveys of consumers, agrees “the rollout of a COVID vaccine has been greeted as the beginning of the end.” But he argues “the end of the pandemic is still on the distant horizon in terms of a return of normalcy for consumer behavior.” As a result, 2021 will be shaped by cautious spending patterns and a wait-and-see posture rather than exuberance, he said.

Martin Rawls-Meehan, the co-founder and CEO of Reverie, a Michigan mattress maker, said anyone trying to make sense of 2021 needs to do so through the lens of 2020, which was a year unlike any other.

“Before the pandemic, we were thinking about a major growth year for 2020. And 2021 would be continuing on the rocket ship.” Now, he says, “you just feel like you kind of lost a year.”

A story about
New Year 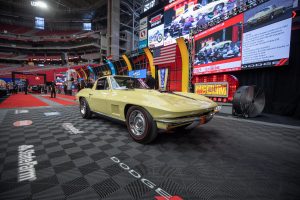 2021 is shaping up to be the best year, ever, for collector car auctions