Last week, RM Sotheby’s sold a Mercedes-Benz 300 SL. In and of itself, that’s not necessarily newsworthy: we typically see about 20 SLs cross the auction block and 30 or so change hands privately in any given year. That the 300 SL in question happened to be painstakingly restored by Brabus Classic, and that a photograph of this car served as inspiration for one Andy Warhol made us take a longer look; but it was how RM sold the car that really captured our attention. The so-called Sotheby’s Sealed process puts a new spin on a sealed-bid auction.

A standard sealed-bid auction calls for interested parties to provide their one-time, highest and best offer, with the winner going home with the car, provided their bid met the reserve price. RM’s Sealed works differently. First, registered bidders may submit online-only sealed bids. After submittal, bidders can see where their bid ranks but not what the high bid is (unless they are the high bidder). They may increase their offer as many times as they like till the scheduled end of bidding.

The key advantage, for all parties involved, is privacy. The seller need not worry that their car’s reputation will be damaged if bidding comes in much lower than reserve. Bidders, for their part, don’t have to publicize their identities or their interest—not an insignificant consideration for some high-end collectors, particularly those who live in regions that don’t celebrate extravagant displays of wealth. The auction house gets to work with sellers and bidders who, for the above reasons, might normally shy away from public auctions. And of course, there’s the chance that the car will fetch a higher price, since in theory, underbidders who don’t know how much they trail by are more likely to overshoot.

The trade off is transparency. Observers like us don’t find out how much the cars sold for. Bidders must blindly trust the auction house to tell them if they’re in front or need to up their offer. Of course, the same could be said of any car bought from another individual or from a dealer.

Sealed appears to be the result of in-person auction houses innovating after online auctions made dramatic inroads into the sales of top-flight cars during the pandemic. First implemented in March of 2022, RM has quietly sold 11 cars this way, including the Nardo Grey Ferrari F40 and the McLaren F1 that were on hand at Sotheby’s display in Monterey.

Since the sales price is not disclosed, there’s no metric for outsiders to determine how successful these auctions have been. That said, the cars offered in this fashion have been extremely sought-after models, and increasing the competition of a sealed bid scenario to meet online-style auction excitement (purely among the bidders themselves) is likely to push prices beyond what a standard sealed bid process would fetch. In this, RM Sotheby’s has identified a means to maximize interest and engagement while ensuring privacy. 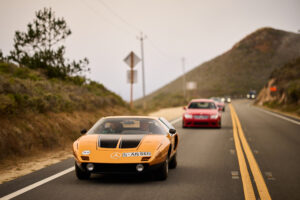