For one week every August, money and Monterey go hand-in-hand. And 2022 certainly brought the dollar signs. It always does, to be fair, but this year there were 148 cars worth $1M or more crossing an auction block. That’s more seven- and eight-figure cars than there have ever been at Car Week. Of those pieces of million-dollar-metal, 112 sold for a total of $323.7M. Zooming out for the whole week, 782 vehicles sold for a total of $456.1M, which works out to an average price of $583,211.

The Scaglietti-bodied racer has one hell of a résumé, including a Rolodex of famous drivers as well as an important place in early Ferrari history and in the history of American sports car racing as a whole.

In early 1955, a still-new Ferrari was only churning out small batches of specialist automobiles, and only a few of them were crossing to our side of the pond to wealthy owners and talented drivers.

This car, Chassis 0598, was lucky enough to receive the best of both. One of two 410 Sports built with a then-new, long-block V-12 of 4954cc (the largest engine yet built by Maranello) and with twin-plug ignition, it first ran as a works car at the 1000 KM of Buenos Aires with Juan Manuel Fangio and Eugenio Castellotti at the wheel. Then, it sold new to Southern California team owner John Edgar. For driving duty, Edgar enlisted a young Texan hotshot named Carroll Shelby, who told the Los Angeles Times "nothing can touch this Ferrari if it runs," and would later quip via a signature on 00598's fuel tank "Mr. Ferrari told me that this was the best Ferrari he ever built."

Shelby won eight races in this car, helping to earn him the US Sports Car Driver of the Year award in Sports Illustrated, and Edgar's son called it "...a perfect marriage for Shelby—brash, powerful, brilliant in how it can destroy competition. To see it run is breathtaking. No, scary.” But his wasn't the only famous butt to touch 00598's seat. Phil Hill, Richie Ginther, Chuck Daigh, Jo Bonnier and Masten Gregory all wheeled the monster Ferrari in anger in period.

So, in a week packed with more great cars than maybe ever, this stood out as an exceptional one. We'll be reporting on many more of cars that crossed the block in the days to come. Stay tuned.

A story about
FerrariSale of the Week 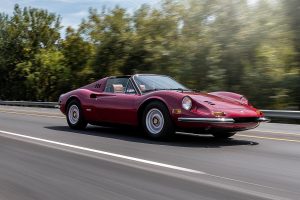