Bonhams just finished its annual Goodwood Festival of Speed auction and, naturally, there were some big prices. Someone even paid £2422 ($3300) for a pair of Lewis Hamilton’s old race shoes. No word if they’ve been washed or not. The big cars we were watching, however, failed to meet reserve. The ex-Peter Sellers, ex-Earl of Snowdon Aston Martin DB5 Convertible stalled at a £920,000 high bid and the 1972 Alfa Romeo Tipo 33 TT3 Le Mans car hammered not sold at a £1.3M high bid.

But aside from those heavy-hitters and the 1928 Maserati Tipo 26B that sold for £967,000 ($1.3M), one car that caught our eye was a seriously rare Lagonda Rapide. At £78,200 ($108,000), it was far from the most expensive car at Goodwood this year, and with that almost Edsel-like grille it certainly wasn’t the prettiest. But it’s still a quirky, interesting car and considering the Rapide’s thoroughbred DNA it’s a good value at this price. We like that sort of thing, enough to make the Lagonda our Sale of the Week.

The Lagonda Rapide was built by hand from 1961-64, but to fully understand this car we need to go back a little further to the 1940s. In 1947 an industrialist named David Brown (initials “DB”) bought Aston Martin, which he owned until 1972. At the same time he acquired another English carmaker, Lagonda, largely so he (and Aston Martin) could have access to Lagonda’s W.O. Bentley-designed DOHC straight-six. That engine went on to power most Aston Martins of the 1950s, and the two companies have been connected ever since. Even today, Aston’s full name is “Aston Martin Lagonda.”

Lagonda continued to build cars of its own until 1958. In 1961, David Brown attempted to revive the brand with an upscale saloon called the Rapide. Based on lengthened Aston Martin DB4 underpinnings and styled by Carrozzeria Touring (like the DB4), the Rapide also used the 4.0-liter engine of the upcoming DB5 and an independent rear suspension instead of the DB4’s live axle. Most Rapides came equipped with a Borg-Warner 3-speed automatic, while a handful got a 4-speed manual.

A 236-hp output and 130-mph top speed were respectable figures in the early ’60s, especially for a four-door, but the Rapide’s £4950 price was Rolls-Royce money back then, and its looks weren’t easy to fall in love with. After selling just 55 cars, the company got the hint and axed the Rapide. It would be the last car to wear a Lagonda badge until the origami-inspired Aston Martin Lagonda of 1976.

Bonhams’ Rapide sold new in London, finished in the same Midnight Blue-over-red leather it wears today. The owner took it back to the factory in 1965 to have the old auto swapped for the ZF 5-speed used on the DB5. Eight months later, it went back to the factory for a replacement engine. At some point it made it over to the States, and way back in 2006 Bonhams sold the Rapide at its Larz Anderson Auto Museum auction for $18,135. Bonhams sold it again at Greenwich five years later for $105,300.

It apparently hasn’t seen much use since, as it’s fresh out of storage, will need some mechanical sorting, and hasn’t been registered since coming home to the U.K. It has never been restored, either, getting only cosmetic attention when necessary. It’s far from a perfect car, then, but these sultry saloons almost never come to market. A DB4 is no doubt quicker and quite a bit nicer to look at but would also be worth several times as much money in this condition. £78,200 ($108,000) ain’t cheap, but in terms of rarity and performance per dollar it doesn’t look like a bad deal at all.

A story about
BonhamsSale of the Week 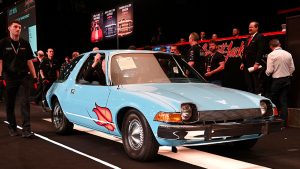 Movie and celebrity cars were stars in Scottsdale 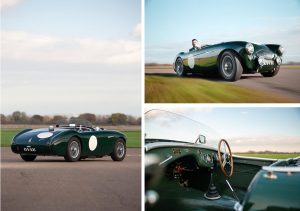