All It took was $25,000 to own this piece of automotive esoterica

A sale doesn’t have to be as expensive as a platinum-framed Mona Lisa or as cheap as a stick of gum and a slap on the back to fall under the category of “noteworthy.” Sometimes, we’re just tickled to see a certain car surface on the market, regardless of the bucks paid—and all the better if the end price is right. Like most people who like cars, we have a soft spot for the weird ones—automotive oddjobs we’re not accustomed to seeing on Google Images, let alone a popular online auction platform.

Case in point—check out this wacky 1985 AC 3000ME sold this week on Cars and Bids. Never heard of the 3000ME? That’s perfectly alright; the small British automaker cobbled together only 106 of these eccentric little fiberglass sports cars between 1979 and 1985 before scrapping the whole project. Almost all 3000MEs were sold in their home market, and the seller claims that it’s the only one extant on U.S. soil.

Even the parsed history of the AC 3000ME is about as clarified as raw clay. The story of the 3000ME starts prior to AC’s involvement, first germinating with deliciously obscure British kit-car manufacturer Bohanna-Stables. Industrial designer Peter Bohanna—pulling his bona fides from time spent at Ford Advanced Vehicles, Alan Mann Racing, and Lola—teamed up with race engineer Robin Stables to develop a new mid-engine sports car concept known then as the Diablo.

Rather than shoulder the almost Sisyphean task of bringing the a car from concept to production, Bohanna-Stables sold the rights to their new hotshot to AC, itself needing a new production model after discontinuing the gorgeous AC Frua following the onset of the fuel crisis.

With Bohanna and Stables retained as consultants, AC simplified the Diablo’s impressively complex design into something that could be produced semi-efficiently beyond just a few batches. A platform-style tub sandwiched by front and rear subframes replaced the Diablo’s tubular spaceframe. A transversely mounted Ford 3.0-liter Essex V-6 outmuscled the concept’s BMC four-cylinder, backed by a five-speed Hewland gearbox.

The first non-running prototype was ready by the 1973 London Motor Show, where the automaker allegedly took down 300 orders; its quick popularity is unsurprising, considering it carried a somewhat affordable projected price tag between £3,400 and £3,800. Naturally, it missed the 1974 model year production target, with the first running test car sputtering to life that year instead.

New government regulations levied on the British automotive industry in 1973 rendered the original design unsuitable, necessitating substantial re-engineering to meet the new standards. Finally, the ME launched in earnest for the 1978 model year, just in time to battle inflation and a manufacturing shortage that spiked the 3000ME’s base price to a mighty £11,300. This meant the little AC stared down the exhaust pipe of established sports cars like the similarly priced Lotus Esprit and Alpine A310 V6.

Sales weren’t great. Middling contemporary magazine tests only exacerbated the situation, as did AC’s ongoing financial troubles, which saw the relocation of operations from its historic factory, along with the discontinuation of its small dealer network, forcing any interested parties to order the 3000ME directly from AC.

After a few flashes of interest and 3000ME-based concepts from Ford, Lincoln, and Chrysler, AC cut its mid-engine sports car after production of just 106 units, with the final few assembled and sold under license by the strange AC (Scotland) PLC side-venture that arose in 1984 and quickly shuttered in 1985.

That brings us neatly to the sapphire blue 1985 AC 3000ME in question. According to the listing, it was imported to BurgerLand in 2011; just prior to the start of its U.S. tour of duty, it received an extensive rebuild in the hands of a “former Formula 1 mechanic.” This refresh included rebuilt transmission, clutch assembly, bushings, exhaust manifold, hardened valves, aluminum radiator, and a new wiring loom, of all things. In the comments of the Cars and Bids sale, the seller describes this car as a 100,000-mile example “made right” by a U.K. based specialist right before it made the swim across the pond.

Looking over the supplied list of known faults—including stone chips, paint crazing on some surfaces, small tear on the dash, minor rust—we reckon this sits at a solid Hagerty Price Guide Condition #3. According to Hagerty UK Price Guide, an AC 3000ME in Condition #3 sells for an average of £14,700 ($19,565), making this car’s $25,000 winning bid a bit of overstep.

Hold on—that’s only if you go by what these ACs trade for in the U.K., where both supply and recognition is healthier. For us, that extra $6,000 or so is more than worth the novelty of ostensibly buzzing around in the only AC 3000ME in the country. We’re not the only ones; prior to its successful sale on Cars and Bids, this AC stalled out at a $30,250 high-bid over on Bring a Trailer back in November. There, the seller commented that high-bid “came close to the reserve” but the “reserve was priced far below what I had in the car.”

In any event, we just hope the new owner is local. We’ll keep our peepers peeled at our nearest Cars and Coffee for a blue-tinted glimpse of what could have been if AC’s money and timing was better.

A story about
BritishSale of the Week 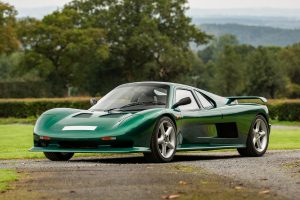