Will this French racing icon sell to a foreign collector?

The 24 Hours of Le Mans is a French institution, not to mention one of the biggest and most high-profile events in the whole country. The event has run nearly every year since 1923, other than in 1936 thanks to a workers’ strike (another French institution) and a little break from 1940–48 in light of World War II. It is by far the world’s most important sports car race, but the list of the 24-hour race’s winners makes clear that the home team hasn’t always come out on top. With 15 Le Mans wins by French cars, France is ahead of Italy (13 wins) but trailing the Brits (17 wins). All are way behind the Germans, whose cars have taken the checkered flag at La Sarthe 34 times.

More than a decade has now passed since a French car (a Peugeot 908 HDi in 2009) won Le Mans, but that’s hardly the driest spell in the country’s history. Back in the early 1970s the French were really struggling, having last tasted victory in 1950 with Louis Rosier’s Talbot Lago. After years of persistence, some rule changes, and a little luck, a home-grown team finally took home the hardware in 1972 with the Matra MS670 – a French car, powered by a French engine, and piloted by a French driver.

That very car is now bound for auction at next month’s Artcurial “Parisienne” sale in Paris. Other highlights from the auction include a sweet collection of Group B rally cars, an Aston Martin DB4 GT, and a wild one-off DeTomaso Pantera prototype. But this Matra is clearly the belle of the ball, and even though we’re just weeks in to 2021, it will be one of the most significant cars to sell all year. It is expected to sell for €4.0M–€7.5M ($4.84M – $9.08M), but there is at least one loud French voice protesting its public sale.

The Rétromobile Paris festivities are postponed until June for 2021 (moving from the usual February), but there are still auctions to pay attention to this month. The three traditional Paris auctions (Artcurial, RM Sotheby’s, and Bonhams) have us looking to the European market every year, filling the gap between the frenzy of Scottsdale/Kissimmee in January and the high-dollar Amelia Island auctions in March. In 2020, a total of 335 vehicles sold for a total of $98.7M between the three Paris auctions.

All are still happening this year, but their formats and their schedules are a bit different. RM Sotheby’s will be livestreamed but won’t allow any in-person attendance. Bonhams will have a live and online hybrid sale at its headquarter on the Rue de la Paix, rather than the historic Grand Palais where the sale has been in years past. Artcurial’s sale will take place at the auction house’s private garage on the Avenue Montaigne in Paris. The Matra MS 670 is Artcurial’s headline car, and very likely to be the most expensive sale of Paris 2021.

Founded during the 1940s, Matra (Mécanique Aviation Traction) was an industrial conglomerate that built everything from cluster bombs to bicycles. When it won Le Mans it was still fairly new to the car business but had accomplished a lot in a short period of time. In the mid-1960s, after acquiring a small cash-strapped carmaker called Automobiles René Bonnet, the company formed “Matra Automobiles” and sold a Matra badged version of Bonnet’s small sports car—the Djet. It was a handsome little coupe and Matra even gifted one to Soviet cosmonaut Yuri Gagarin during his 1965 tour of France. Then, to help promote and sell its road cars, Matra eyed motor racing.

Largely thanks to company boss Jean-Luc Lagardère, Matra embarked on a methodical, multi-year campaign to win at the highest levels of both open-wheel and sports car racing. Starting with single-seaters in Formula 3, Matra took its first win at Reims in 1965. Two years later Matra broke into Formula 1, and by 1968 was seriously competitive with Ken Tyrrell managing the team, Jackie Stewart driving, and the venerable Cosworth DFV V-8 powering its car. Matra won both the F1 Drivers’ and Constructors’ Championships in 1969.

In sports cars, meanwhile, Matra first had a go at Le Mans in 1966 with its BRM V-8-powered M 620. Unfortunately, all the Matras dropped out of the race. The same thing happened at Le Mans in 1967. By 1968, though, Matra had built its proprietary V-12—a 60-degree 3.0-liter screamer developed for both F1 and endurance racing—with funding from the French government.

Matra entered a single MS 630 longtail with its new V-12 engine for the 1968 running of Le Mans, with Frenchmen Johnny Servoz-Gavin and Henri Pescarolo driving. After qualifying fifth, the blue Matra scrambled into second place behind the Ford GT40 that eventually won. Late in the race, unfortunately, an electrical failure forced the French car to retire.

In 1969, the Matra squad finished a respectable fourth and fifth at Le Mans. The 1970 race was a disaster, with all three Matras suffering piston ring failure within a few laps of each other. Even so, none of the 3.0-liter prototypes, Matra included, were really competitive with the 4.5- or 5.0-liter Porsche 917s and Ferrari 512s, anyway. The solo MS 660 entered for 1971 again worked its way up into second before ultimately bowing out.

Then, for the 1972 race, came Matra’s golden opportunity. A rules change effectively barred larger sports cars like the Porsche 917 from competing at Le Mans. The 3.0-liter prototypes were suddenly the top dogs.

With a much clearer path to victory ahead, Matra pulled out all the stops, entering four cars (all painted blue, of course), including three examples of its newest car, the MS 670, which benefitted from the lessons learned over the previous four years. Matra also made sure to put a French driver in each car, completely ignored the rest of the 1972 racing season, and prepared for an all-out assault on Le Mans. It was a matter of national pride. Expectations were high. The French President was there to watch.

Coincidentally, Matra’s greatest opponent, Ferrari, took the opposite approach. The 312PB dominated the rest of the season and had already clinched the ’72 World Championship for constructors, but Ferrari felt that the car wouldn’t perform over the full 24 hours and opted instead to entirely steer clear of Le Mans. Matra’s biggest competition therefore came from the Alfa Romeo Tipo 33TT3, the Cosworth-powered Lola T280, and a few aging Porsche 908s.

With President Georges Pompidou serving as the honorary starter, the race began at La Sarthe on June 10, 1972 with a French Matra driver in each car for the first stint. The engine in Jean-Pierre Beltoise’s MS 670 expired after the car completed just one lap of the race, but luckily that didn’t presage doom for the rest of the team. Matra’s remaining cars were running 1-2-3 during the night. Jo Bonnier (F1 veteran and two-time Targa Florio winner) in the quickest of the Lolas fatally crashed during the morning and the MS 660C of Jean-Pierre Jabouille and David Hobbs retired with less than 90 minutes left thanks to gearbox problems, but other than intermittent rain there was little drama at the front.

At 4 p.m. on June 11, Pescarolo and Hill’s MS 670 won with a comfortable 11-lap lead over the second-place MS 670 piloted by Francois Cevert and Howden Ganley. It was the first win for a French car in over 20 years, and Graham Hill became the first and only driver to take victory Le Mans, the Formula 1 World Championship, and the Indy 500.

Prelude to a three-peat and life after Le Mans

Having proved a point, Matra nevertheless expanded its efforts in 1973 and actually paid attention to the rest of the racing season, winning both Le Mans and the world championship for sports cars in 1973 … and 1974.

The 1972 Le Mans winner, Chassis 670-01 (the first MS 670 built) was also part of Matra’s 1973 campaign, taking third at Monza and a win at Zeltweg (Austria). It later became a promo car, in the process dressing up with altered bodywork, a different engine, and a Porsche gearbox. Matra put the car on display at its museum in 1976, and it never left the company’s ownership. Matra started restoration work in 2002, but the veteran racer wasn’t drivable until 2008. Four years later, in 2012, it stretched its long-dormant legs on track at Le Mans for the 40th anniversary of its victory.

Controversy, and what’s next?

Now that MS 670-01 is up for auction, its fate and the circumstances leading up to its sale have stirred up some controversy in the French press.

Back in the early 2000s, Renault had a contract with Matra for the latter company to build its Espace and Avantime (both minivans), but Renault canceled that contract and Matra closed its factory in 2003, firing all its employees. The employees successfully sued Renault for a settlement totaling … wait for it … €4.2M. Curiously close to the presale estimate for Articurial’s Matra lot, no? Indeed, The Lagardère Group, which oversees now-defunct Matra Automobiles and the Matra museum, is angling to sell off the historic machine to pay the compensation.

Henri Pescarolo, the driver who piloted the car to its hard-fought triumph for France, isn’t happy about the decision. “Scandalous! Stupid!” is how he described it to the French AFP news agency. “Arnaud Lagardère is destroying everything his father created,” he contends. Pescarolo, who after driving 670-01 went on to win Le Mans three more times and start his own team, has even tried to get the car classified as a historic monument. That would at least prevent it being sold off to a foreign buyer that would see it leave France.

The Lagardère Group hasn’t cooperated and it has bills to pay, so will press on regardless. The “monument of motorsport,” as Pescarolo calls it, will cross the block at Artcurial’s “Parisienne” auction on February 5. 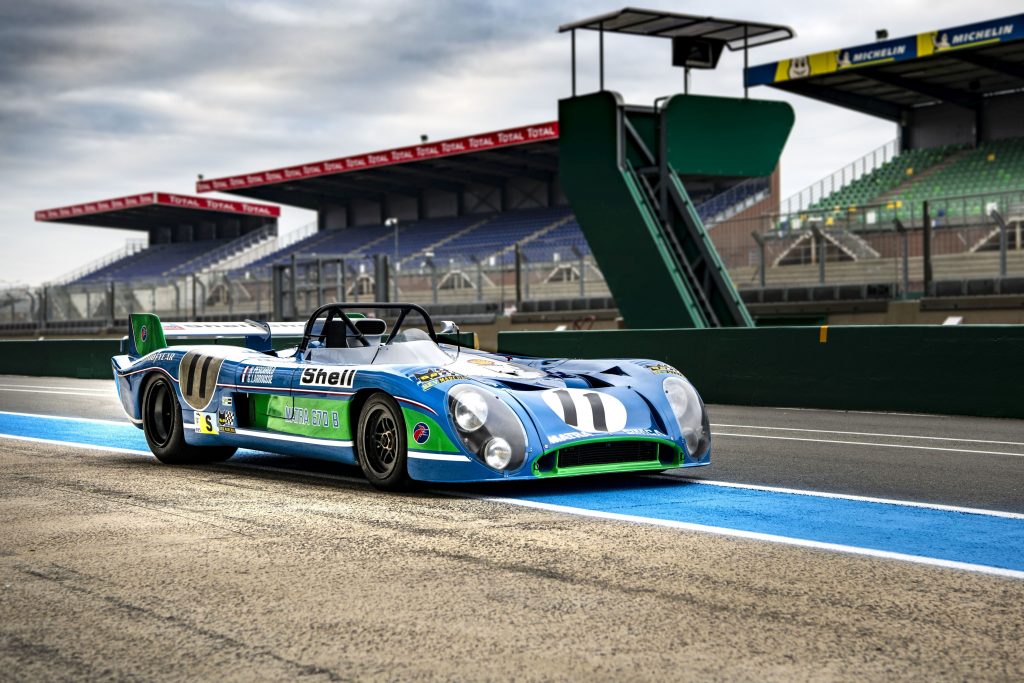 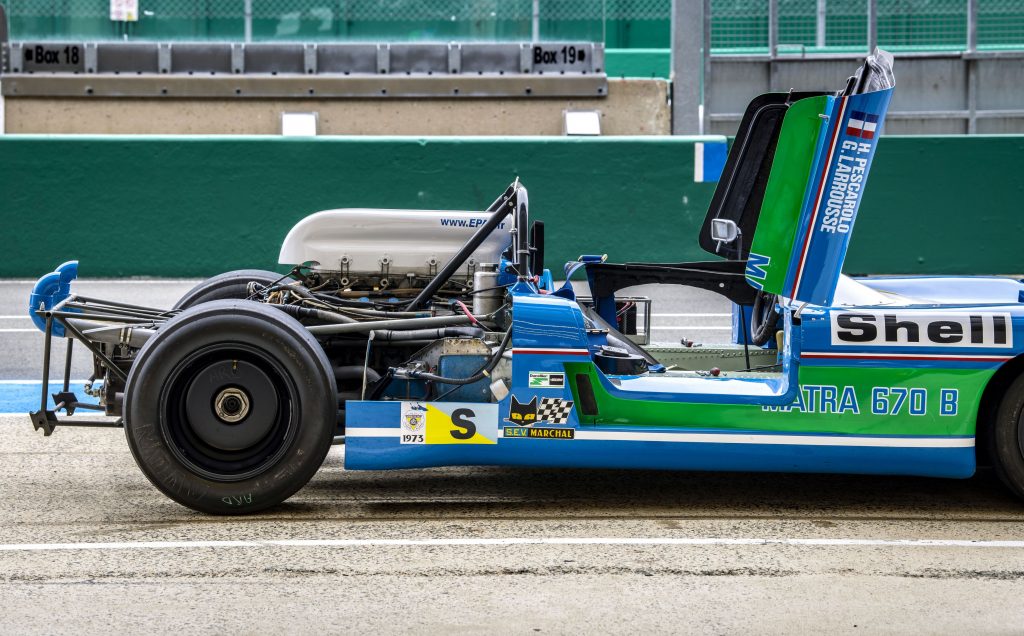 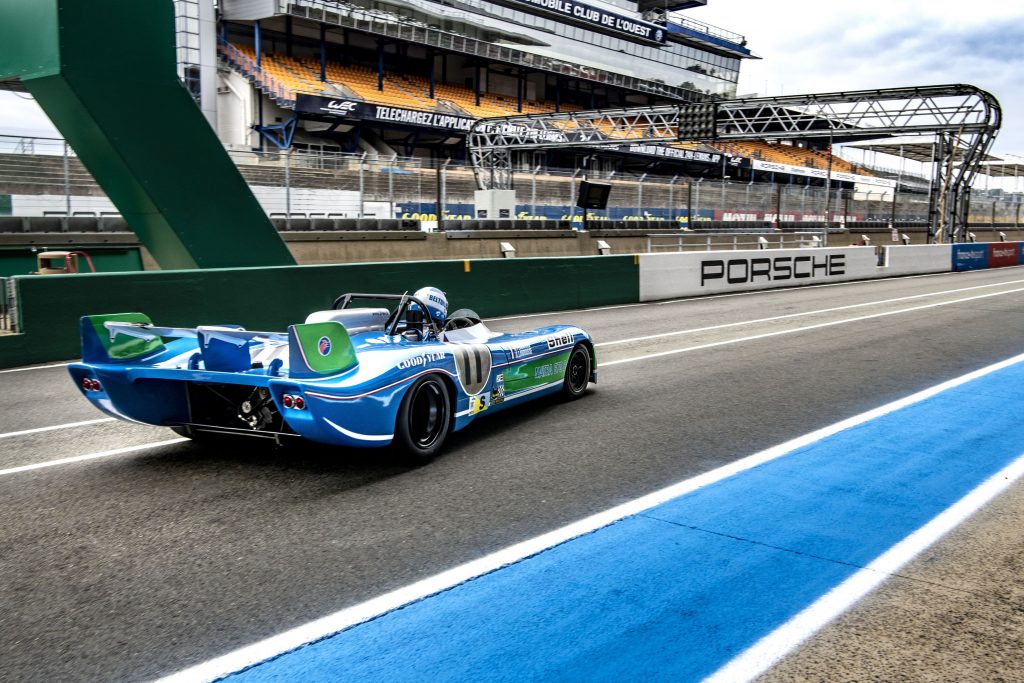 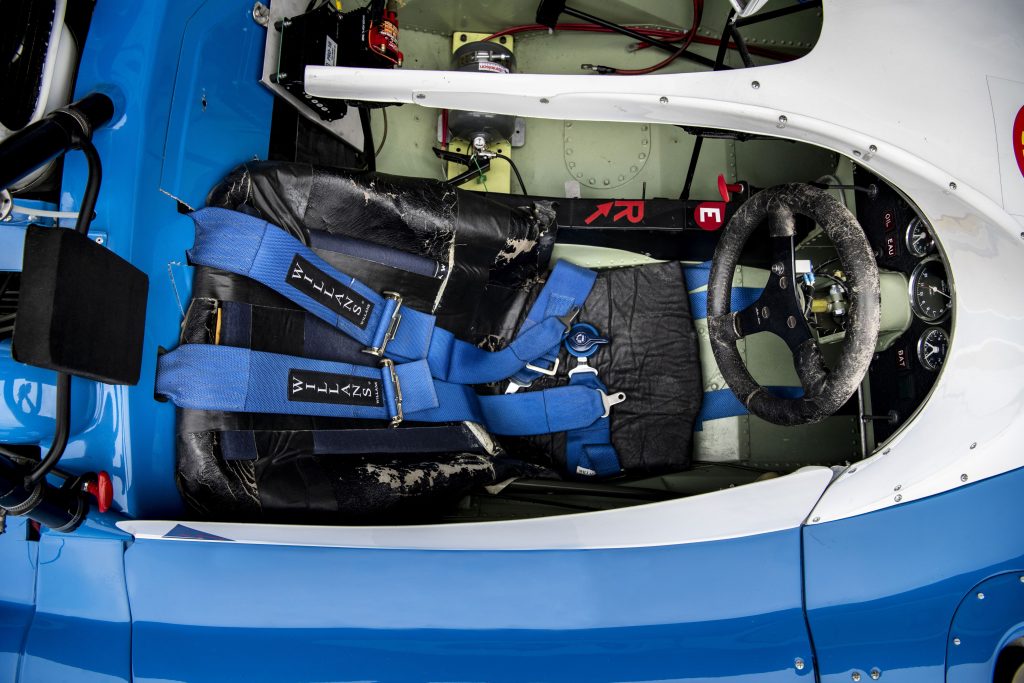 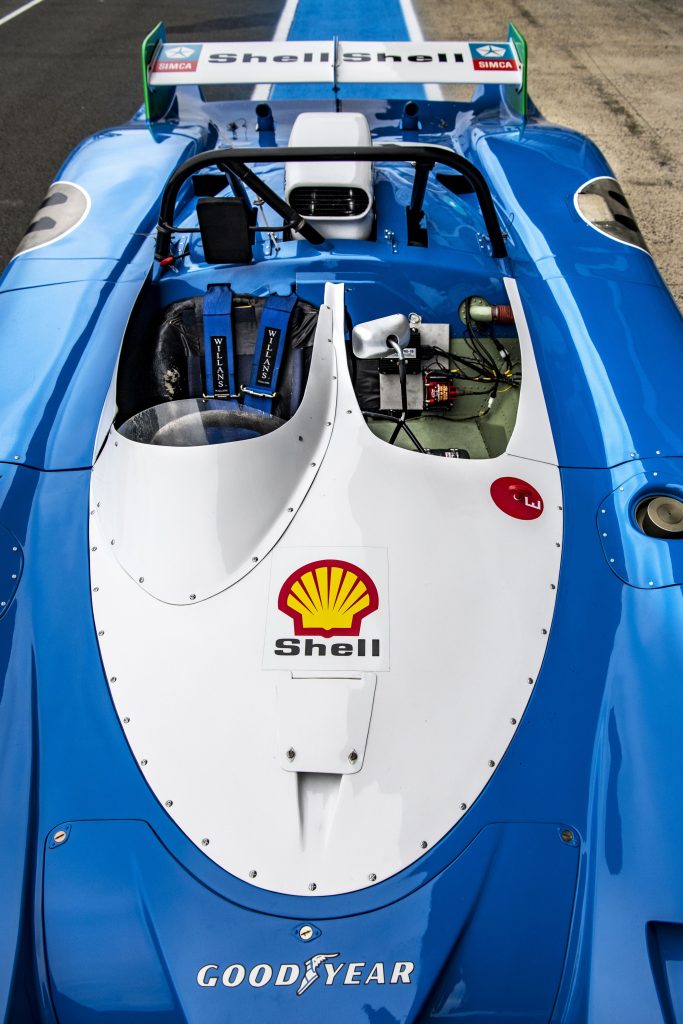 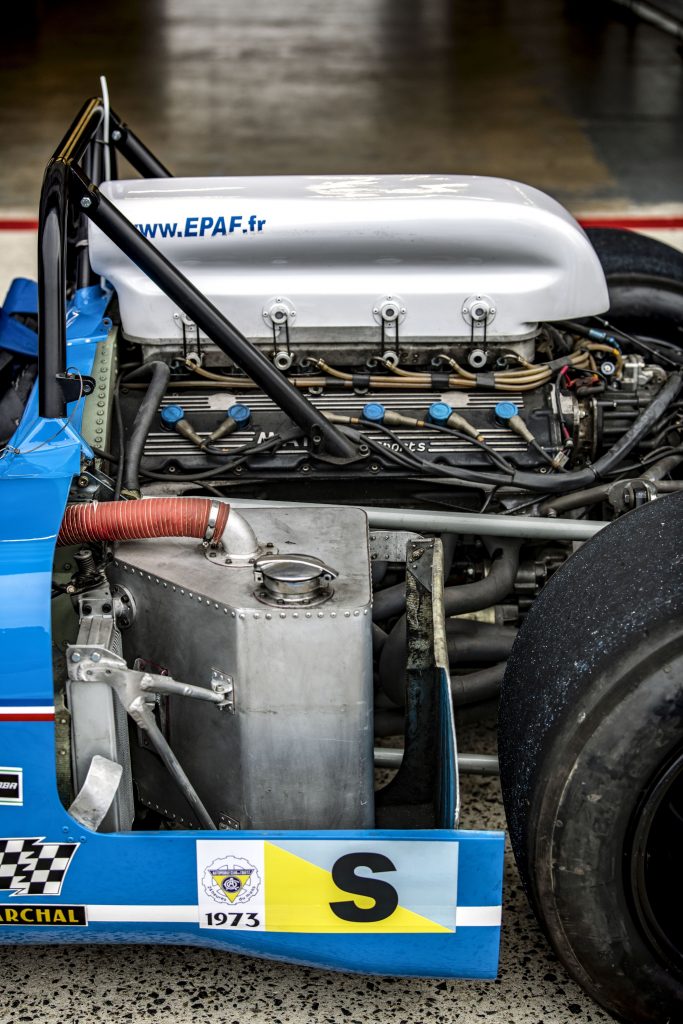 A story about
Alfa Romeo 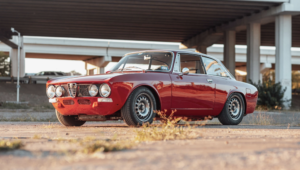 Guess the final bid on this modified Alfa Romeo, and you could win $500 [Guessing Closed] 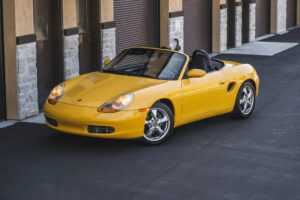 7 clean convertibles that are (still) under $20k