The collector car market is bigger than you think

Just about everyone in the collector car world—and more than a few investors outside of it—has opinions on what classics are worth and what impacts their values. Far less thought has been given to a question that is arguably more fundamental: How big is the supply? In other words, how many collector vehicles actually exist?
A multiyear study by the Hagerty Valuation Team sought to determine just that. Our conclusion is that there are 31 million collector vehicles in the United States. Turns out this little hobby isn’t so little.

How we got here
Zeroing in on the size of the collector car market is no simple task. Most sales are conducted privately, not all classic cars are registered, and some have decayed to the point that they aren’t really even cars anymore. And then there’s the sticky matter of determining what qualifies as “collectible.”
Finger-in-the-air estimates have circulated through auction tents, boardrooms, and car-kindred conversations like ghost stories around a campfire, and those estimates have typically ranged from 5 million to 15 million enthusiast vehicles.

To come up with a more exact number, Hagerty’s Valuation Services team started with a dataset that included nearly every vehicle imaginable. It was, as you might expect, a very big, messy list, clouded by some 325,000 unique and sometimes duplicative manufacturer names (is that a Volkswagen Thing or a Kübelwagen?). Analysts relied on the Hagerty Vehicle Information Database and VIN decoder, as well as manuals and registries to eliminate airplanes, boats, buses, construction equipment, recreational vehicles, and trailers.
With the data in a usable state, the next task was to figure out how many of those vehicles are still on the road. We love hearing stories of barn finds that have been brought back to life, but statistically speaking, the inherent volatility of their condition prevented their inclusion in this study. To calculate how many of the vehicles in our database were active, we used two methods. For collectibles produced after 1981 (the year VINs became standardized), we compared Hagerty Price Guide and underwriting vehicles to vehicle-in-operation data and production numbers. For vehicles manufactured before 1981, we analyzed effective and expiration dates of full coverage insurance as well as registration transactions to estimate what is active.
Now for the thorniest question: What is a collectible vehicle? We all have opinions, but for this study, Hagerty defined a collector vehicle as a car, truck, or motorcycle that is at least 30 years old and has demonstrated a broad appeal as something more than daily transportation. We also included certain enthusiast vehicles less than 30 years old that are covered in the Hagerty Price Guide. As is often the case, the insurance side of Hagerty’s business provided context: We included vehicles listed in Hagerty’s insurance underwriting guidelines. The long list of eligible vehicles features first-ballot Hall of Famers like the Ford Model T and the Duesenberg Model J, along with contemporary exotic supercars built by Bugatti, Ferrari, and Porsche. Historic nameplates, such as the Chevrolet Corvette and the Ford Mustang, transcend eras; emerging specialty vehicles like the Subaru WRX, Mazda Miata, or Lincoln Blackwood pickup might come as a bit of a surprise.

The total, nearly 31 million enthusiast vehicles in the United States, still represents but a slice of the overall car market, which is some 275 million and counting. But it’s a significant slice. For perspective, there are more collectible vehicles in the United States than there are registered vehicles of any kind in Canada (27.9 million).
The fact that there are so many collector cars also tells us there are plenty of collectors. Hagerty estimates there are 18 million enthusiast vehicle owners in the United States, meaning 8 percent of all Americans with a driver’s license have a collector car in their driveway.
The total value of these vehicles is huge, falling just shy of the trillion-
dollar mark, and they transact often. Annual auction sales total around $1 billion, collector car dealer sales amount to approximately $1.8 billion (IBISWorld), and the opaque private market ranges anywhere from $20 billion to $30 billion in annual sales.
That said, the average price of these vehicles, close to $28,500, is much more affordable than a new car (and more affordable than the cost of an average wedding, for that matter), putting to rest the notion that the term “collector car” is interchangeable with “expensive car.” Vehicles valued in excess of $249,000 make up little more than 1 percent of the American vehicle population.

Hagerty’s study also showed that the term “collector car” isn’t equivalent to “old car.” Rather than being filled with 1932 Ford Model As or 1957 Chevy Bel Airs, the market is dominated by cars and trucks from the 1970s and 1990s in particular, with 59 percent of all enthusiast vehicles in the United States having been manufactured after 1980. As regular readers of Insider know, the rise of Generation X’s buying power has brought more neon-tinged modern sports cars and SUVs into the collectible sphere.
Even so, the core interest in the market has remained largely unchanged over the years. Enthusiasts of all generations—including millennials—still chase established collectibles like the 1965–66 Ford Mustang, of which 353,000 continue to cruise today’s roads. Much older cars and trucks, though, are losing relevance. Some 1.5 million vehicles made prior to 1950 have been lost from the U.S. vehicle population since 2016, be it through expired registrations or through attrition.
The American collector car market is also mostly, well, American. Chevrolet, Ford, Dodge, Pontiac, and GMC battle for the top spots across all decades, and American marques comprise 55 percent of the vehicle population. European and Japanese marques represent 24 and 16 percent of the market, respectively, a share that is sure to grow as more vehicles from the 1990s and later enter collectible status.

Here to stay
The most important takeaway from our study is simply that the collector car market is huge. And it’s likely to keep growing. Some of the best enthusiast cars of any era hit showrooms during the past 15 years in massive numbers—think everything from Porsche 911 GT3s to Ford Mustang GT350s and Mitsubishi Evos. Those that haven’t already become collectible are poised to exit their depreciation curve soon and find their way into enthusiast ownership. So, although you may not see a collector car in traffic every day, the collector car market is big enough that it will be with us for years to come.

Tim Weadock has been collecting valuation and market data for Hagerty for two decades. He is one of the inventors of Hagerty’s pre-17-digit VIN decoder. 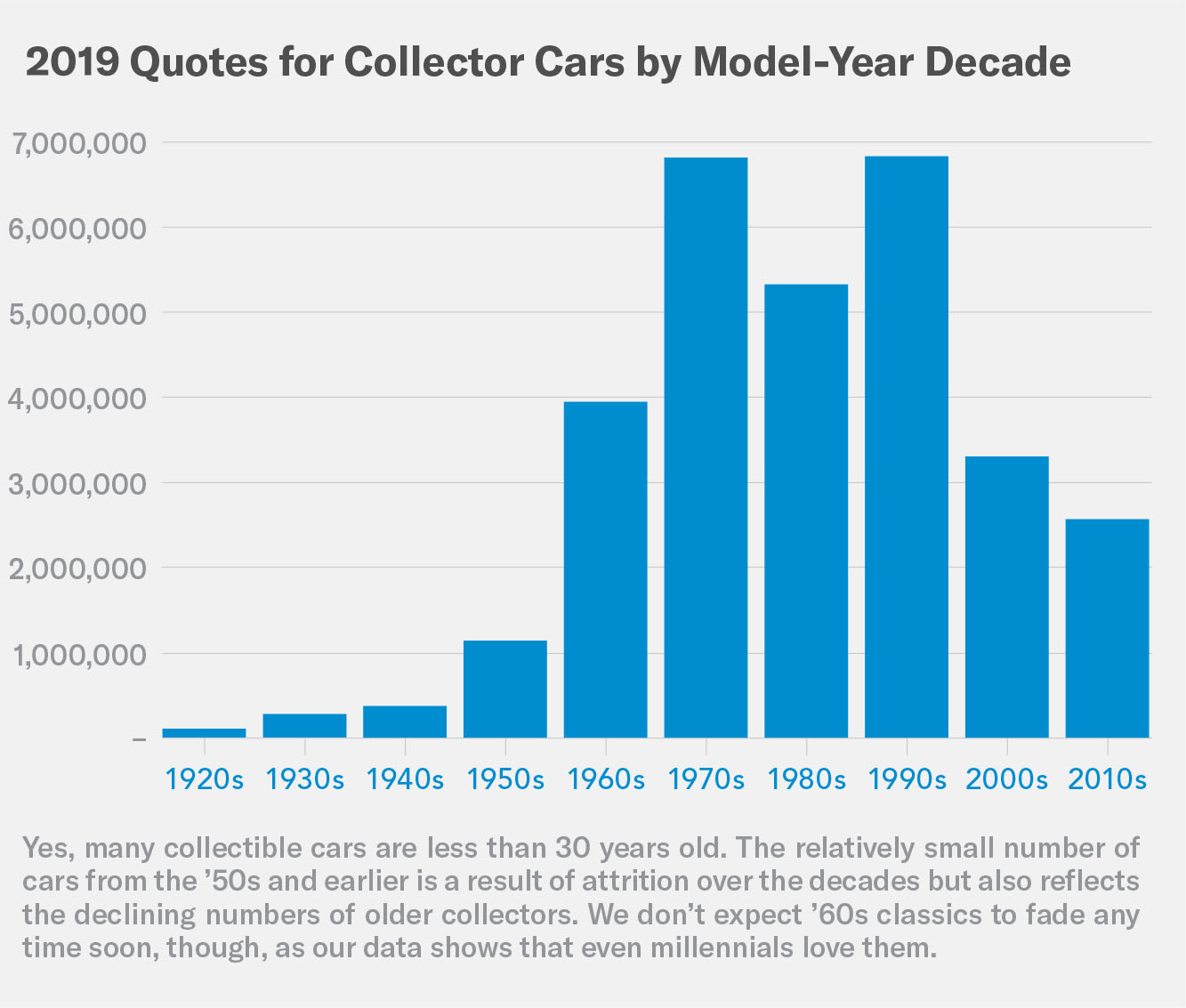 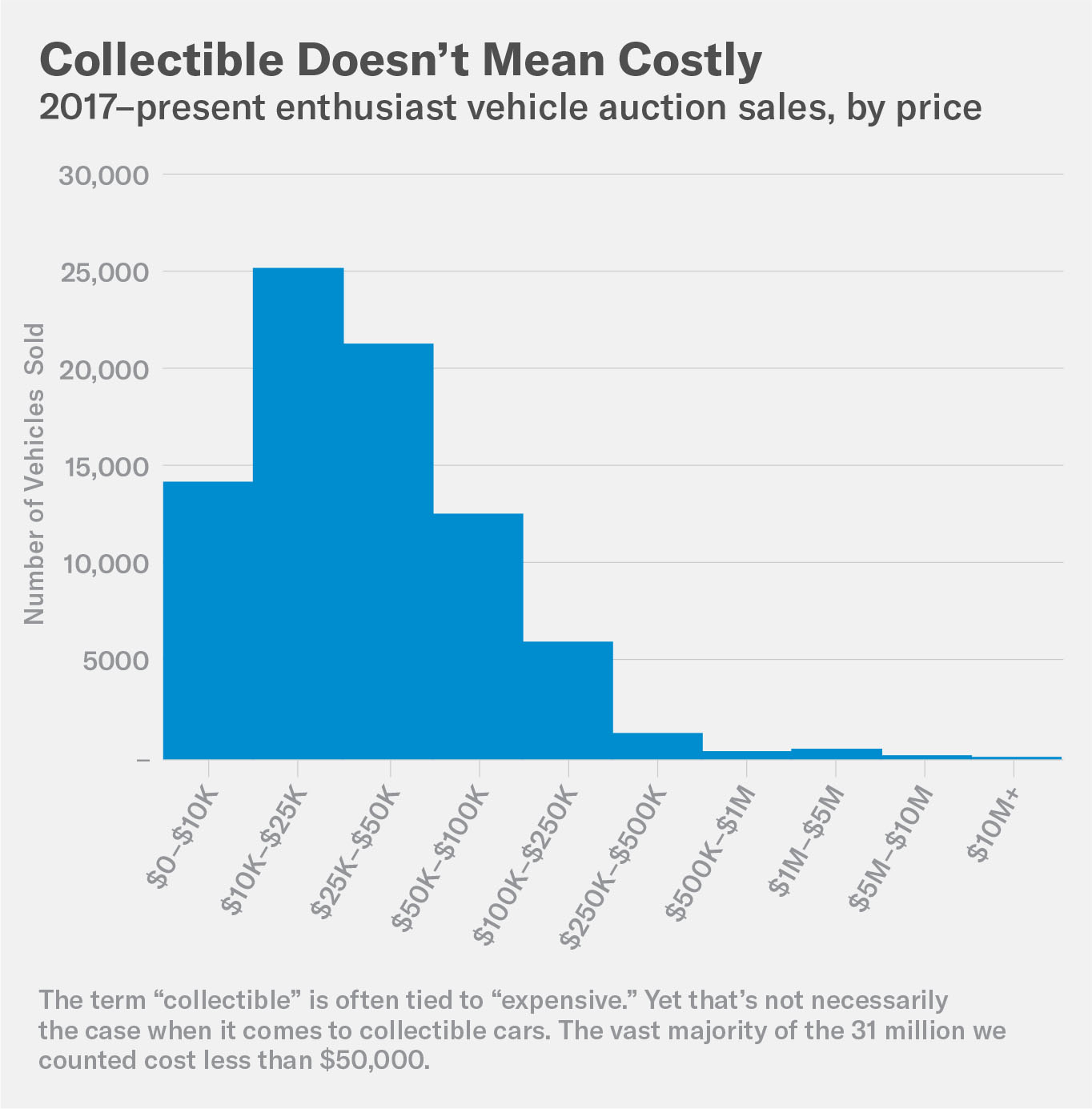