You may not know this, but for a very brief time in the late 1990s, Toyota made an off-roader that dwarfed the Land Cruiser in both size and capability. To honor their achievement, Toyota named this behemoth the Mega Cruiser. This beast became legal for import in 2020 under the the 25-year import law, but they have eluded public auction. Until now.

This 1996 Toyota Mega Cruiser just sold for $314,500 on Cars and Bids, after buyer’s premium. At first glance, that number seems absolutely irrational. But when you take a minute to think about how rare and important this vehicle is, it starts to make a little more sense—if only a little.

The Mega Cruiser is the ultimate Toyota off roader. Built between 1995 and 2001, it was originally designed for the Japanese military, coded internally as the BXD10. However, just like its carbon copy, the Hummer, Toyota made civilian versions (coded BXD20) so that anyone with the means could play soldier while shuttling kids to soccer practice.

As with the Hummer, the Mega Cruiser was built for the sole purpose of off-roading. With triple-locking differentials and central-tire inflation (an option this specific example lacks), mud and sand were no longer an issue. To help navigate tight trails, the Mega Cruiser’s four-wheel steering cut the turning radius to 18.4 feet—more than 7 feet tighter than the Hummer. As ground clearance is often the first limiting factor off-road, Toyota equipped the Mega Cruiser with portal axles (where the drive shaft meets the hub above the center point off the wheel) and all drivetrain components were positioned above the frame. The result was 16.5 inches of ground clearance, slightly edging out the Hummer and about twice that of the contemporary FJ80 Land Cruiser. To get an idea of the Mega Cruiser’s off-road prowess, watch it completely embarrass a Defender off-road here.

The focus on ground clearance created packaging that made passenger space a little tight compared to a Land Cruiser. That said, is wasn’t as bad as the Hummer—the Mega Cruiser incorporated stadium seating in the rear to help maximize space. Fit and finish puts the Hummer to shame, too. Toyota appears to have succeeded in creating what was in effect Hummer 2.0, exceeding the original in both capability and comfort.

Unsurprisingly, the Mega Cruiser is absolutely massive, at least by mid-90s standards. At just over 200 inches long, the Mega Cruiser is 16 inches longer than the H1 Hummer wagon. It’s also got a 4 inch longer wheelbase, and stands nearly 5 inches taller than the H1 in any of its forms. Despite its larger footprint, at 6,300 pounds, the Mega Cruiser weighs nearly one ton less than the Hummer. That’s thanks in part to a much smaller engine: a modest 4.1-liter turbodiesel inline-four “15B-FT” that was shared with Toyota’s heavy trucks and buses. Rated at 155 horsepower and 282 lb-ft of torque, the 15B’s output was about half that of the Duramax in the Hummer H1 Alpha. But, at 13 mpg combined, it was a comparative fuel miser.

It’s unlikely Toyota will ever build a 4×4 larger than the Mega Cruiser. Frankly, given Japan’s narrow streets and how costly their vehicle size taxes can be, it’s a wonder Toyota built a civilian version in the first place. As a halo truck, it certainly had the presence to attract buyers to the dealerships, even if they left with a much more practical vehicle.

It’s clear that the Mega Cruiser is a special truck that holds an important place in Toyota’s off-road legacy. That said, is it $300k important?

About 3000 Mega Cruisers were built, with the majority being military spec – less than 150 were civilian vehicles. For the buying public, the Mega Cruiser cost nearly 10 million yen when new, in the same ballpark as the Honda NSX. This week, a 1-of-483 Honda NSX Type-R crested $300,000 on Bring a Trailer. Only 1/3rd as many civilian Mega Cruisers were made, but since the NSX has been collectable for more than a decade it didn’t draw the same sticker shock.

The Mega Cruiser became legal to import to the U.S. just after Land Cruiser values in the US started hitting their stride—and the seller imported this and sold it at the right time. The more modern generations of Land Cruiser have seen the most growth of late: in the last five years, values for the FJ60 and FJ80 increased by nearly 150% while the classic FJ40 has remained relatively flat. The market has turned in favor of the late-century Land Cruisers, where the Mega Cruiser is king. This massive sale of such a massive SUV will throw diesel on an already hot market.

That said, it's likely this Mega Cruiser sale will remain a record because of its unique nature. This truck has many aftermarket upgrades that look factory installed, including a custom Gamiviti roof rack, heated front and rear seats, a refrigerator, much needed rear-view camera and parking sensors, and five tv screens that were installed more subtly than expected for the time. Most importantly, while all Mega Cruisers were right-hand drive from factory, this one has been converted to left-hand drive, one of only a handful of civilian Mega Cruisers to get such treatment. The seller states the conversion was done in the UAE, probably during the ownership of The Minister of the Interior of Kazakhstan.

Shipping records show this Mega Cruiser was delivered to Colorado in March 2022 from Kazakhstan, by way of Houston. We have also found three others imported to the US, one military-spec and two civilian models, all from Japan. A sale like this is likely bring more Mega Cruisers to the States, and as more sell publicly, a value range will become more clear. It's safe to say, though, that Mega Cruisers will be consistent six-figure trucks. 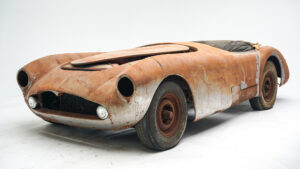 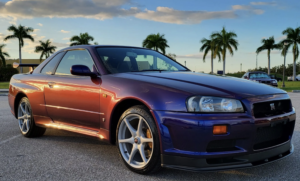