Are we approaching peak market? This car may give us a hint.

Last week, Barrett-Jackson announced that a headliner to its March Scottsdale auction would be CSX 3015—the sole-surviving twin-Paxton-supercharged 1966 Shelby Cobra 427 Comp known as the Super Snake. Rare as this vehicle is, it’s not an uncommon sight at a Barrett-Jackson auction. The company sold it twice before, once in 2007 for $5.5 million and again in 2015 for $5.1 million.

Both those years are now recognized as peaks of the collector car market. Is the reappearance of CSX 3015 on the auction block an ominous portent of a new market peak?

We aren’t implying that CSX 3015 casts a spell on collector car owners as it crosses the block, encouraging them to sell at any price and start stamp collections. It is reasonable, however, to wonder if the past owners of CSX 3015 have more information about the collector car market and the factors that influence it than most. Presumably, someone who spends $5 million on a 427 Cobra is an astute collector. What happens when, one day, that collector wanders by CSX 3015, looks at it and thinks, Now’s a good time to sell?

This sort of thing happens in other markets. Notably, in the weeks leading up to the financial crisis of 2008, two private equity firms (a rebranding of the corporate raiders of the 1980s), decided to go public. A private equity firm is an expert at assessing a firm’s value relative to its stock market valuation. When a firm is undervalued on the stock market, they buy it, take it private, restructure it, and make a profit. In 2007, two of these companies, KKR and Blackstone, looked at the stock market and decided, Now’s a good time to sell. Blackstone’s timing succeeded in that they sold a stake of their company to investors. KKR was a couple of weeks late. Its offering missed the market peak, and it postponed the sale until 2010.

Much as we like to think everyone buys collector cars purely for pleasure, their owners are often encouraged to buy or sell based on the same murky boom-and-bust cycles that impact the broader economy. Leading up to 2007, values were swept up by the housing market. In the past decade, breaks on capital gains taxes encouraged a speculative buying spree that slowed considerably when the tax laws changed.

Neither of those factors are at play in 2021, yet there are some parallels. The stock market is up again, despite economic devastation caused by the pandemic, with a handful of companies pushing the S&P 500 up 16.26 percent in 2020 to close at a record. Cryptocurrencies are increasingly popular and volatile. People might see a lot of digital wealth in their accounts.

That digital wealth has doubtless been finding its way into the collector car market of late. We haven’t seen the speculator-fueled spikes in values as we did in, say, 2015, or even more so in the late 1980s, but activity did increase in 2020, even as the economy ground to a halt. The growth of online auctions for collector cars is a happy coincidence. The intersection of unexpected wealth, boredom, and online engagement in the form of an exciting car auction could be a shot of nitrous for the car market.

Does this mean we’re predicting that when the Super Snake sells in March, the collector car market will have peaked? Not really. For one thing, CSX 3015 has also sold at less suggestive times—our records show it changed owners in 1995, 2006, 2007, and 2009. It’s easy enough to think of innocent motivations to sell now: The present owner might have noticed that prices for Shelbys have, in the wake of Ford v Ferrari, been ticking up. Or they’re selling not out of a fear that values will drop but rather because they’ve finally accepted that prices for high-end cars have dropped from those 2015 highs and aren’t likely to return in the near future. Or, maybe, they’re just looking to make space in their garage.

Moreover, the collector car market, despite the buzz at online sales and the few in-person auctions, looks to be stable overall and largely has been for the past half decade. The various indices Hagerty uses to monitor the collector car market have been mostly flat or slightly down in recent months, and we haven’t seen a flurry of new auction records, as we did around 2015. Last but not least, it’s worth remembering that although the collector car market has peaks like any market, the valleys that follow tend to be shallower and shorter than what we see elsewhere in the economy.

Nevertheless, the reappearance of CXS 3015 on an auction stage serves to remind us all that prices are always fluctuating, and that the only guaranteed return on investment in a classic car is pleasure.

A story about
Shelby 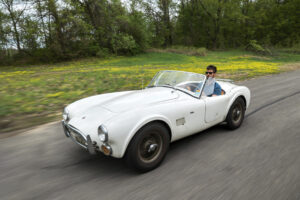