Predicting the final sale price of a car is a bit of an art. It’s a somewhat teachable skill, but it’s based heavily on both expertise and intuition; even if you have fifteen reference sales in front of you, there’s no guarantee you’ll land on a price that’s even half the final sum. If you’re a returning participant in our regular Bid is Right contests, you’ve likely seen this in action with the incredibly wide range of guesses from your fellow contestants—no matter the car.

We never like to lob you a softball, and this week’s 1972 Lotus Elan Sprint might as well be a frisbee. Think you got it in the bag regardless? Be careful—looks can be quite deceptive. These little Loti never fail to make the shortlist of best handling cars of all time, thanks to Colin Chapman’s endless know-how when the way turns curvy. It’s light (around 1,500 pounds), it’s handsome, and it’s both exquisitely simple and devilishly complex.

Therein lies the difficulty in valuation. These are very mechanically simple cars that are sometimes ruinously expensive to keep in tip-top shape. This contrast boils down to the Elan’s body-on-frame construction; early development revealed an open-top fiberglass roadster is quite flimsy, so the handsome barchetta bod was mounted on a steel backbone chassis for rigidity.

Naturally, these steel bones rot like an apple dropped in a swamp. It’s alarmingly rare to find a well-kept Elan carrying its original chassis, as values conversely increase if the chassis is substituted for one of the readily available modern replacements. Ditto for any further preventative rust-proofing and upgraded cooling systems. As Lotus enthusiasts are drivers, not concours regulars, the market prioritizes clean and well-presented road-ready examples over both gleaming trailer queens and patinated barnfinds.

A further wrench in the mix that you can essentially build an Elan from reproduction parts, right down to the fiberglass body. This has led to quite a variance between what is deemed original and what is a bitsa car. But, remember—most Elans have a replaced chassis and those that do usually command a premium.

Boy, isn’t that two-tone lime green paint pretty? The Elan in question is a rather minty example—and we ain’t just talkin’ color here. As far as documentation shows, this is a real-deal 1972 Lotus Elan, with a repaint to the current color when the chassis was “refreshed” after it previously sold on Bring a Trailer in 2015 for a strong $43,000.

That was then. Hagerty Price Guide values 1972 Elan Sprints between $20,800 for a shabby Condition #4 and $67,000 for the nicest of the nice in Condition #1 (Concours). But hey, the Elan market is weird, and this is a weird time for any market, so your mileage—and guesses—may vary.

Anyways, you (should) know the rules by now. Toss your guess for final price in the comments below. Closest to the pin without going over takes home a tidy $500 for your sweaty brow and many hours logged. We’ll see you in the comments. 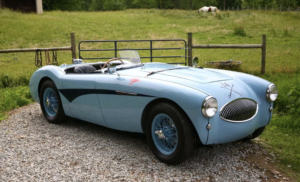 Special Report Despite the 300 SLR sale, Mercedes-Benz says its commitment to classics strong as ever
Conner Golden

Motorsports A layperson's guide to getting into vintage racing
Eddy Eckart