After the absolute feeding frenzy during the last year, many would assume that the Market Rating would have already hit "hyper appreciation." But our Market Rating is designed to help us see the big picture rather than reacting to a few big sales. It derives from more than a dozen components, including auctions but also Hagerty Price Guide values, insurance data, and economic indicators. Last but not least, the algorithm behind the Market Rating tends to pull the value toward the middle (50) and away from the extremes. That may sound arbitrary but is actually based on fundamental statistics: In any large dataset, most samples cluster around the middle. For example, it's possible for a basketball player to hit ten 3 pointers in a row, but over the course of a season, they will likely regress toward the mean. In the collector car market, we assume the most likely scenario is a market that is essentially flat.

All of which makes this 15-month hot streak unprecedented. It started when the Market Rating was already near 60, and fought the algorithm's desire for balance the entire time, never reversing course.

However, there are some signs that the run could be coming to an end. As the stock market continues to slump, our macroeconomic indicators used in the Market Rating dropped to their lowest point in over a year. While still high, the economy is showing signs of a continued downward trend.

Economic uncertainty, among other factors, has begun to effect the classic car market. Classic car sales through auctions and between private parties are slowing, although there still appears to be an appetite at the ultra-high-end, as the $142M sale of a Mercedes-Benz 300 SLR Uhlenhaut Coupe indicates.

Owner sentiment likewise remains strong. The ratio of insured value increases to decreases in Hagerty's book of business grew for the 20th consecutive month, with the largest growth coming from the affordable end of the market.

Indeed, the cheap classic car is quickly becoming a thing of the past. The average value of the one-hundred most insured vehicles in the Hagerty Price Guide—another component of the Market Rating—rose again to a new all-time high. To put this market growth into perspective, just look at our Affordable Classics Index.

Our next Market Rating update, for July, will be a critical one, as it will gauge the market before we head into Monterey Car Week. Stay tuned. For more detail on how the Market Rating works, read here. 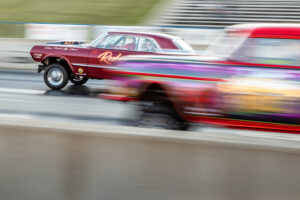 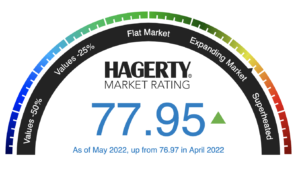