There’s an old joke about the Yugo. “How do you double the value? Fill up the gas tank!” Cue that laugh track.

This week, however, someone paid $9451.05 for one. You’d have to fill it up with Macallan or Dom Perignon to double that price. Although nine grand is absolutely in “cheap car” territory these days, as far as we can tell this is the most someone has ever paid for one. It’s not a car we keep in the Hagerty Price Guide, nor is it one we plan to cover. We don’t think we’re in for a run on Yugos in the collector car market but it is fun to see some love for what may be the most hated-on car of all time, at least here in America.

These creaky little commie hatchbacks from the 1980s trace their roots back decades earlier in the twentieth century. Zastava, a Yugoslavian company in what is now Serbia, started as an armaments manufacturer in the 1950s but started assembling Ford-designed vehicles for the Yugoslavian armed forces in the 1930s. In the 1950s, and after the state had been reorganized as the Federal People’s Republic of Yugoslavia, Zastava reached a deal with its neighbors across the Adriatic at Fiat to build and sell versions of the Italian company’s small economy cars. That relationship proved fruitful, and by the 1980s Zastava was building a shortened version of the Fiat 128 called the Yugo 45.

Enter Malcolm Bricklin, the serial automotive entrepreneur who brought Subaru to North America, built his own gullwing sports car several years before John DeLorean, and imported Fiat sports cars under the Bertone and Pininfarina brands. It was after that latter deal dried up when Bricklin found himself in Belgrade, in need of a new project and convinced that this dirt-cheap three-door from communist Yugoslavia would sell well in Ronald Reagan’s America.

The Yugo was aimed squarely at people who would ordinarily have to buy a used car but could be tempted by the prospect of a new car for the same price. Bricklin started Yugo America to import the car, and the Zastava factory set up a separate assembly line to build American-market Yugos. In mid-1986, the base model Yugo GV started at just $3990 (about 10 grand in 2022 dollars). What does GV stand for? “Great Value,” of course!

Other models included the GVL, which sported a better interior, and the GVX, which ditched the 1100cc engine and 4-speed for a 1300 and 5-speed. There was even a cabriolet version in 1988.

At first, 4 grand for a new car was hard to pass up. The Yugo was significantly cheaper than other bare bones imports like the Hyundai Excel, not to mention domestic deals like the Chevy Chevette and Ford Escort. The commercials made big promises, and they never lie, right? “Reliability is his second name,” said one. “Dependability and safety now have a totally new meaning…Buy yourself some freedom. Buy a Yugo!” Sounds great. I mean, who doesn’t love freedom?

The Yugo was even made the official car of Team USA Volleyball for some reason. But after strong initial sales, the problems and derision started. Even the usually bland Consumer Reports got a little spicy in their language, calling the Yugo’s transmission “easily the worst we’ve encountered in years,” and complained that the interior is “covered with cloth that resembles towel material.”

The Yugo was painfully basic, had poor attention to detail, and was slow, with a top speed of 86 mph. The timing belt service intervals were an incredibly short 30,000 miles. Combine that with the fact that the old Fiat-designed four-banger is an interference engine, and you had a high risk for a catastrophic failure for Yugo owners who weren’t on top of their maintenance.

Given the car’s quality issues and the perception that a Yugo was pretty much poverty on wheels, there was a real stigma around it. And jokes. In addition to the one we started this post with, other classics include “Why does a Yugo have a rear defroster? So you can keep your hands warm when you push it!” And “Yugo has come up with a very clever anti-theft device. Yeah, they made the name bigger!”

Yugo sales fell off a cliff at the end of the decade. There are even stories of dealerships offering a buy-one-get-one sale where they’d throw in a free Yugo with the purchase of another car, and people declining to take their free Yugo. Over their short run, equipment and quality did get better, but the little Balkan beater had become showroom poison. Pollution from the primitive, carbureted engine resulted in an EPA Recall. Then, outbreak of war in Yugoslavia completely disrupted industry, resulted in UN sanctions, and eventually broke apart the country altogether. Yugo exited the US, and although talk of a return persisted, it was largely quashed in 1999 when a few NATO missiles plowed right into Zastava’s automotive facility.

Thirty years later, aside from a few die-hard defenders, the Yugo is mostly remembered as a rolling punchline. Most Yugos were crushed years ago, and people who buy one now often do so as an expression of automotive irony for shows like Radwood or Concours d’Lemons. That’s why we were surprised to see this one popping up on Bring a Trailer, the usual haunt of perfect Porsches and JDM royalty.

At 67,000 miles it ain’t perfect, but if we’re going to grade on a curve condition-wise for any car, it’s this one. A mid-range GVL model, it reportedly stayed with the original California owner’s family until 2021, and service this year included a rebuilt carb, a refresh of the brake and cooling systems and a timing belt replacement as well as new water pump, tires, fuel pump/filter, front wheel bearings, spark plugs, radiator, and thermostat. World’s best? Maybe.

At less than $9500 it was nearly the cheapest thing on BaT all week and brought less than its inflation-adjusted original price. But it’s still top dollar, and when we got in touch with the seller she told us “I was surprised at not only the price but the amount of people bidding at the last minute…I was seeing bids from about a dozen people in the last few minutes!”

$9K for a bit of automotive irony is a lot of money, but people have spent more to achieve the same goal. Few, however, will get as much attention or start as many conversations as this one, wherever yu-go. 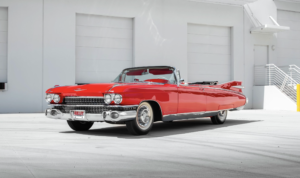