Back in May, Hertz and Shelby American teamed up to announce a 3-year partnership offering Shelby Mustangs through Hertz’s rental program. At select locations, you’ll soon be able to rent a 900-horsepower GT500 for just $399 per day. As far as experiences go, there are far worse ways to spend 400 bucks to get a thrill. While this is big news, it’s not anything new.

Starting in 1966, Shelby American partnered with Hertz to offer the “Rent-a-Racer” program. This partnership with Shelby ultimately led to the production of 1,000 GT350H for the Hertz rental fleet. This deal meant that if you were at least 25 years old, for just $17 per day and $0.17 per mile ($155.40 per day, $1.55 per mile adjusted for inflation), you too could experience a GT350. Considering that Shelby was the dominant name in racing at the time, this would’ve been a very enticing deal. Nowadays, these former rental cars are worth a boatload, bringing anywhere from $117,000-$275,000.

While the GT350H was very similar to the standard GT350, there were a few distinctions. Although 85 were blessed with a manual transmission, most were equipped with automatics. There’s also that iconic paint job: Black and gold as well as white and gold are the most prevalent, but there were other colors were offered with those gold stripes. You don’t have to be a car enthusiast to look at one of these and know that it’s a special car and is rightfully coveted by everyone.

Jumping ahead to 2006, Hertz and Shelby joined forces again, bringing us the GT-H. The timing couldn’t have been more perfect. Ford had just launched the retro styled S197 Mustang in 2005, muscle car fever was in full swing and the original GT350H was now 40 years old. The GT-H saw a 25-horsepower bump over the Mustang GT, and received a ton of styling nods to the original in the form of the iconic black and gold paint scheme, GT350 inspired grille, hood pins and rear deck spoiler to name a few highlights. 500 coupes would be produced for 2006, and a convertible version came out for 2007.

In retrospect, the GT-H got lost in the shadow of the new-for-2007 GT500, setting the performance bar at 500 horsepower. A 325-horsepower GT-H offered almost exclusively with an automatic transmission looks far less enticing—more horsepower and rowing your own gears is always better, right? The horsepower argument can’t be helped, but interestingly enough a handful of five speed-equipped GT-Hs slipped out of the factory with manuals. These cars were offered to executives and just four were made for 2006, and 17 for 2007.

Following the introduction of the next-generation Mustang, Hertz partnered with Shelby American and Ford once more to celebrate the 50th anniversary of the Rent-a-Racer program with the 2016 GT-H. This limited run of 140 cars were based on the Mustang GT and saw the addition of a Ford Performance exhaust, Ford Racing handling package and carbon fiber spoilers.

If the standard GT-H wasn’t enough, Hertz executives were treated to the addition of a supercharger, which upped the horsepower figure to 670 and, like the prior iteration, the automatic transmission was ditched for a manual. Production remained extremely limited, with just 16 cars being kitted out with the extra goodies.

In retrospect, the Hertz Rent-a-Racer program has to be regarded one of the great marketing partnerships of its time. If you’re a serious Shelby Mustang fan, a Rent-a-Racer needs to be in your collection. If you need to fill that void in your garage, Broad Arrow Auctions has your fix. Its sale of cars belonging to Jim Taylor has one of each generation Hertz Shelby up for sale without reserve, among other non-Hertz Shelby Mustangs and Cobras. 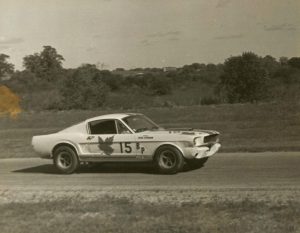 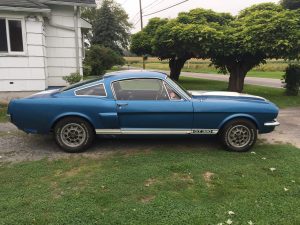