Dr. Frederick Simeone, renowned car collector and founder of the Simeone Automotive Foundation Museum in Philadelphia, passed away on Saturday, June 11. He was 86.

“This is a sad day for the car world,” said McKeel Hagerty, CEO of Hagerty. “Fred was a visionary collector of world-class sports racing cars. But even more so, he brought his intellectual gifts as a top-flight neuro-spinal surgeon and professor to the car world. In my experience, I have never met a more intellectually honest and authentic car guy than Fred.”

Simeone’s passion for cars—and his generosity in sharing that passion—started at an early age. As a boy, he convinced the Philadelphia Public Library to let him gather automotive literature and information so patrons could learn more about cars. With their support, he solicited material from manufacturers and from any person or company he thought could offer something of value. He always asked for two copies: one for the library, and one for himself. A thorough pursuit of automotive knowledge and a constant effort to ensure that others could enjoy the fruits of his labor would come to characterize Simeone’s life and contribution to the collector community.

Simeone’s father, Dr. Anthony Simeone, fostered young Fred’s automotive passion from an early age. The elder Simeone had his own small collection of cars well before an industry existed around collecting. After Fred Simeone became a surgeon, he pursued collecting in his own right.

“It would be easy to say he was the right man at right time, but his story is more than that,” said Dave Kinney, founder and publisher of the Hagerty Price Guide. “Fred had a sixth sense of what was going to be important in the future. He was able to amass an unbelievable, never-to-be-duplicated set of cars through diligence and dogged determination.”

In his spare time, Simeone would flip through old racing magazines, and he cultivated a list on his refrigerator of cars he wanted to pursue. He’d then assemble an exhaustive dossier of available literature on his target, pulling together all the pieces of that car’s provenance and history. Only then would he set about the purchase.

“He sought out the best, and if he had the choice between a car with provenance and a decorated record on track, and one that was perhaps in nicer shape but without the history, he’d go with the historically relevant piece,” noted Bill Murphy, spokesman for the Simeone Foundation Museum.

The result is a collection that includes some of the most important sports and race cars in history.

But his importance to the classic car world extends beyond the fine vehicles he collected. Simeone was a student of automotive history and held the conviction that historical automobiles belong in modern culture.

“Fred was infinitely knowledgeable and gracious in his expertise. I will miss his incisive perspective on all things historical,” said fellow collector and good friend Miles C. Collier, founder of Florida’s non-profit Revs Institute.

Like Collier, Simeone used his cars to educate others. He donated his entire collection to the Simeone Foundation, whose museum opened to the public in 2008. From then until very recently, Simeone remained engaged, hosting school visits and events to showcase cars in the collection and their historical impact.

“Car enthusiasts everywhere benefitted from his passion,” said Tom Cotter, author and host of Barn Find Hunter. “He was so kind to people—he’d run a Daytona Coupe or a GT40 around a parking lot just because he knew it’d make others happy.”

“You’d see Fred at races or concours, and people would walk up and start a conversation,” continued Cotter. “He was so passionate about the shared experience through cars that it’d be an hour or more before the conversation ended. That just doesn’t happen anymore. I don’t know who could take his place in our community.”

Dr. Simeone is survived by his daughter, Christina Simeone.

A story about
Obituary 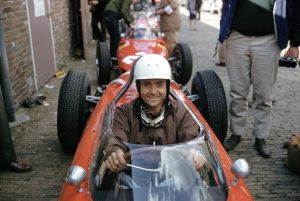