We are just coming off the best Monterey auction week of all time. Total sales exceeded $470 million, blowing away the previous high water mark. Lots of the action was for 1980s and newer collector cars, from limited-edition Porsches to later Ferraris.

JDM cars, especially Nissan Skylines, were another story. Despite these cars being some of the hottest on the market right now, the prices realized in Monterey were mixed at best. The most shocking sale was the 2001 GT-R V-Spec II which brought $577,500 against a $750,000–$850,000 presale estimate. Leading up to Monterey, this was the most anticipated JDM offering of the week. So, is this an indication of the end of the GT-R runup? Were expectations set way too high? Or, maybe, do auction companies have yet to master this segment of the market?

Let’s address that disappointing 2001 GT-R V-Spec II first. The car seemed to have everything going for it. One of 14 R34 GT-Rs imported by MotoRex years ago, it is fully legal for use in the US and does not have the usage constraints of the vehicles brought in under Show or Display exemption. Adding to that, the car was loaned to Paul Walker for a stint, was shown at SEMA, and used in a BF Goodrich marketing campaign. So what happened?

First of all, the car showed up on Mecum’s lot list late in the game. High-caliber cars don’t always sell themselves—it takes time and marketing dollars to capture the attention of enthusiasts and media outlets to create the proper buzz to attract serious bidders. That’s especially true given that JDM collectors aren’t necessarily in the habit of checking runlists for Mecum, which is known primarily for its top-grade muscle cars.

On the ground, it was clear that the R34 and a Top Secret-built R32 were a fish out of water in this setting. Mecum did a great job of presenting the cars on site, but eavesdropping on auction-goers made it very clear that Mecum’s core audience did not understand what they were looking at. This car could have and should have brought a higher bid, and the seller would have been justified in hanging on to the car, but considering that the car had been for sale for a bit of time at an undisclosed asking price, the seller may have felt it was time to move on. And the Top Secret R32? It was offered as the very next lot by the same seller, who rightfully felt that a high bid of $140,000 wasn’t enough to turn it loose.

Another car that surprised by not meeting expectations was an ex Japanese Grand Touring Car Championship (JGTCC) race car. This R32 based car was campaigned by Hasemi Motorsport to a 2nd place overall finish for the series in 1994. While the livery is less recognizable than the blue Calsonic car or the very 1990s looking HKS oil splash liveries, the presale estimates of $500,000–$550,000 seemed right on par for what a car like this should bring. But listing the car at no reserve was a big risk, one which did not go to plan. When the dust settled, the car went to a new home for just $280,000.

For comparison, the Team Taisan GT-R, piloted by “Drift King” Keiichi Tsuchiya sold in Japan for $335,000 back in January. The GT-R market has only gained steam since then. Again, context matters. One of the primary reasons the Skyline has gained steam among younger North American collectors in recent years is the ease of owning and driving them. Maintaining and campaigning an old race car is never easy. The American buyers who have the disposable income to run in vintage motorsports may be behind the curve when it comes to understanding the appeal of something that raced on the other side of the world. That also means there are likely few historical racing series over here that this car is a solid fit for. It is entirely possible that this car would have done better in Japan, where many more collectors would get it.

It wasn’t a bloodbath for every GT-R in Monterey, though. Gooding & Company sold a 1971 Hakosuka series Coupe for a very condition appropriate $179,200, and RM had a low-kilometer, lightly modified R32 which brought an unsurprising $72,800. The biggest winner was RM’s 1,600-kilometer doppelganger of their surprise sale R33 from last year’s Monterey. While the price didn’t blow everyone’s minds like last year’s, $151,200 is above current Hagerty Price Guide #1 value for this car, even factoring the premium for being finished in Midnight Purple. Of course, those values have risen dramatically since last year and, in the process, so have our expectations.

Even though Monterey did not meet those expectations (or presale estimates), we hesitate to say the Skyline market is softening. We can, however, see clearly that Skylines are not immune to the factors that affect the performance of all cars at auction. Significant cars should be consigned early on so they can be marketed properly, no reserve sales can be a gamble, and some variants still appeal to a very narrow audience. 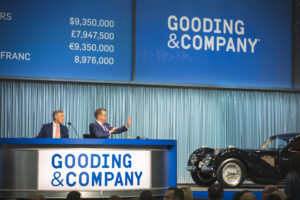