The Hagerty Market Rating, our holistic measure of the “heat” of the market, dropped for a third consecutive month, to its lowest point since January 2022. This marked the first time the rating has dropped three months in a row since March 2020.

Whereas in recent months we could simply point a finger at inflation and the broader economy, we are now unquestionably seeing signs of slowdown within the collector car market itself.

Our measure of overall auction activity saw its largest drop since April 2021, despite the fact that the raw number of cars sold is at an all time high. Blame a drop in median sale price, which is exacerbated by continued inflation. Even used-car prices, which had been climbing since the early days of the pandemic, have decreased 3.3% over 2022.

Private Sales Activity remains steady, with 49.72% of cars selling above their insured value—this represents a slight downward trend after having been over 50% for three months in a row during the third quarter.

For the first time since June 2020, the ratio of insured value increases to decreases dropped for both Broad Market and High End vehicles. Although those ratios are still extremely high, their decline is a sign that the exponential growth seen over the past 18 months has ended—and moreover that the perception of huge growth is starting to recede.

Inflation continues to take a bite out of appreciation recorded in the Hagerty Price Guide. While the average #3 value of all cars in the Price Guide is at $182,230, an all-time high, its inflation adjusted rating is the lowest since May 2014 when it was $143,478.

One segment that is managing to beat inflation are cars in the Hagerty Blue Chip Index, which is comprised of the Ferrari 250 and its closest peers. As we've reported, inflation tends to drive the ultra wealthy to spend more precisely when the rest are trying to cut costs. Solid prices for multi-million-dollar supercars at RM Miami earlier this month furthers this point.

Although the rating has steadily decreased since its all-time high in June 2022, the current value of 75.85 still remains in the "rapid expansion" section of our 0-100 scale. That may sound odd but actually helps put our current "lull" into perspective: The market remains blistering hot compared to previous years. The performance of the classic car market going forward will depend a lot on whether sellers agree with that perspective—or if they try to cling to the summer highs. Of course, the general economy will have a say, as well.

We will need to wait until January to determine how this will play out, when thousands of cars are auctioned off at Mecum Kissimmee and the Scottsdale auctions. 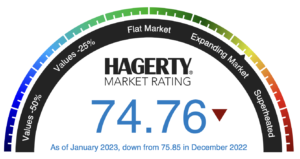 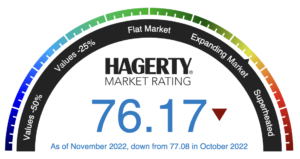 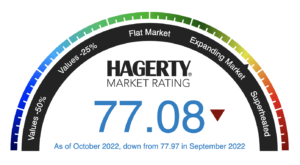