Pick up these 5 German performance cars before they appreciate

If you’re interested in high performance at a low price, Uncle Sam typically has the answer. Newer Corvettes and Camaros, off-lease Chargers and the like tend to occupy the primitive “cheap speed” section of the car enthusiast brain. German performance cars tend to fall at the very opposite end of that spectrum. Most Porsches have long since climbed out of reach of the average enthusiast, and BMWs and Mercedes that could be had for fun money just a few years ago are going for six figures. Heck, even an Audi TT can be pricey these days.

But if you like your horsepower with a bit of sauerkraut on it, fear not. There is a corner of the market—or more precisely, an era—where one can still find fun German cars for pennies on the dollar. Set your time machine to circa 2005. This era gets a lot of grief in enthusiast circles. It’s known as when the German car industry started building things to a price rather than a standard of excellence. It’s also around the time that German design—almost universally clean and conservative through the ’90s—got a little wild, with mixed results. Add to that the fact that many of these cars can be difficult to maintain and you have a recipe for rapid depreciation.

But these complaints miss the spirit of the 2000s, and the engineers behind the decade’s greatest cars (and a few hold-outs that made it into the ‘10s) can’t understand your criticisms anyway. No, the only language that these rival Germans “sprechen’d” at the turn of the century was horsepower.

This was the time when the road car builders of Deutschland learned to shoehorn massive engines into everything from family haulers to hard-top convertibles. It was quite possibly the most interesting time in human history to achieve a job in mid-to-upper management or own a successful dental practice. Now, even as most used car prices surge at unprecedented rates, it is still possible to get your hands on one of these former prestige-mobiles for less than they went for new. If that image, the low buy-in, or having the last word in smiles per gallon appeals to you, here are our top five picks for your garage.

Bemoan Chris Bangle’s penmanship all you want; we would swap the current incarnation of the M5 for one with any of the following attributes: Normally aspirated V-10, 8,250 rpm redline, rear-wheel drive, manual gearbox.

Best of all, these M5s are still within reach of the average enthusiast. That’s particularly remarkable considering its predecessor, sold from 2000–03, has already left that orbit, with daily-driver condition cars valued at nearly $40k in our price guide and the best examples going for six figures. In contrast, our insurance quotes peg the median value of a 2005–10 model at just $25,000, a number that’s held steady since 2018.

Like many German cars of the era, this one could break expensively, but many of the costliest service bills can be pinned on the optional SMG (Sequential Manual Gearbox) automatic transmission; one with three pedals will not only punch your ticket to automotive nirvana with each downshift but will also likely save dollars and headaches whenever a diagnostic is performed.

If you were raised on American muscle and had the phrase “no replacement for displacement” drilled into your consciousness from a young age, you have to love what BMW’s M division was cooking in the 2000s. Two years after the M5 sprouted two extra cylinders for the only time in its history, the most famous branch of the M family tree followed suit, giving birth to the V-8-powered M3. And, what a V-8 it was. Even the most devout disciples of the inline-6 were won over after a run to the new eight’s 8,300-rpm redline. To many, the E92 was the last great M3: It paired its fantastic new powerplant with the legendary steering feel and balance that the newer, turbocharged generations keep forgetting.

In spite of the car’s significance, our median quote values for it fell below $40,000 for the first time in 2018, and it hasn’t yet ticked back past that threshold. In the 2020s, the value has hovered between $32,000 and $33,000, making the V-8 M3 one of the best, most engaging deals on the used-car market. It may not last. As we’ve reported previously, we’ve seen a heavy increase in the number of people calling us for quotes on insurance on M3s of this era.

Meanwhile, in Ingolstadt, a new Lord of the Rings was being forged. The second-generation A8 flagship first reached U.S. shores as a 2004 model. The big Audi replaced the BMW 7 Series as the ride of choice for Jason Statham’s Transporter—and yuppies everywhere followed suit. Nowadays we take for granted the fact that Audis are high-tech machines with dramatic exteriors and plush cabins; cars like this era’s A8 blazed that trail. It also had a full range of incredible engines. Audi’s celebrated 4.2L V-8 was the entry-level offering. Options included a 6.0L W-12 that made 444-hp and 428 lb-ft of torque and, in the S8, a V-10 that came to Audi by way of Lamborghini.

Unfortunately for A8 resale values—but fortunately for the rest of us—the yuppie hordes have moved on (most to Teslas). Median value for the big-dog W12, the only model for which we have sufficient insurance data to track accurately, sits at $22,500.

As you might have expected, things were nuttiest over at the AMG wing of Mercedes-Benz. The Mercedes E-Class received a mid-cycle refresh in 2006. In AMG-guise, the facelift brought with it a boisterous 6.2L V-8 (marketed as a 6.3). That engine alone is worth the price of admission. The facts that these E-Classes were rear-drive (rather than the all-wheel-drive favored by today’s E63) and could be had with a wagon body (even in the United States), solidifies their status as the ultimate German Q-ships.

Perhaps owing to the reputation of the 6.2-liter engine, which would later power the mighty SLS AMG, median value for these E-Classes is the on our list, at $52,500 per our insurance data (expect a wagon to command slightly more than a sedan). That might seem steep in this company, but consider that a new Mercedes E63 goes for more than $100k—and has a 4.0-liter V-8—and it’s hard not to see this as a deal.

AMG managed to out AMG themselves in the 2000s by offering, on several model lines, a biturbo, 6.0-liter V-12 made 604 hp. That power is impressive today, but when the SL65 debuted in 2005, it was ridiculous. Consider that the Ford GT made “only” 550 hp. The V-12’s astonishing 738 lb-ft of torque, meanwhile, out twisted even then heavy-duty diesel pickups of the day.

Getting into an SL65 AMG when they were new was a near $200,000 proposition. They’ve since ridden an extreme wave of depreciation that was intensified by a less than sterling reputation for reliability. Our valuation data currently pegs the median value of an SL65 at just $49,000 (up from around $45k a year ago), with the best examples grabbing closer to $80k.

Amazingly, that pillar of luxury and torque isn’t where the story ends. In 2010, Mercedes gave the SL a facelift and added an even more exclusive Black Series trim. Starting at a spit-take-inducing price of $300,000, the SL65 AMG Black Series included a fixed carbon-fiber roof, some of the most prominent fender flares ever fitted to a production car, and an even bigger pair of turbos that pushed output to 661 hp. The production run was limited to just 350 units, and exactly half of them were shipped to the United States. Exclusivity, power, and rarity are often ingredients for appreciation, but even the ultimate SL remains relatively affordable. These days a like-new example will carry a like-new value of about $315k, according to our price guide, but the median value we see through our insurance data is just half that, at $140,000.

The big caveat—or more precisely, caveat emptor—that applies to any of these cars is that they can be affordable to buy but very expensive to own. That’s all the more so the case for examples that haven’t been carefully maintained. Make friends with a skilled mechanic before pulling the trigger. Find a good example and hold on to it, though, and chances are you’ll look prescient down the road as nostalgia, attrition, and rising incomes for the young enthusiasts who lust after early 2000s German performance cars inevitably turn the tide on prices. In the meantime, those moments behind the wheel promise to be priceless. 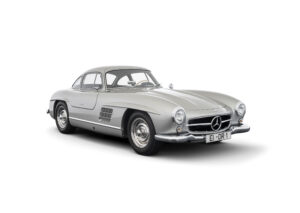