Amelia is still the Porsche hotspot for in-person auctions

Bring a Trailer might be ground zero for record-smashing Porsche prices—particularly for the Carrera GT and Porsche 959—but it’s the spate of in-person sales surrounding this year’s Amelia concours that draws the rarest cars and the biggest bucks from the Porsche crowd’s carbon fiber checkbooks. So, what can we expect from this inevitable confluence of superflush Porsche collectors and this supercharged collector market? Let’s find out.

Porsche 356s, the early mid-engined cars, and longhood 911s are still expensive and wildly sought after, but prices have evened out as much as can be expected in this market. These early models from the German marque were first to appreciate roughly a decade ago, and most of these cars have long established their value. Prices are heavier than they have been in the past, but hey—that’s just the result from cruising up the soaring line-graph of the collector market as a whole.

Bonhams’ 1955 Porsche 550 Spyder is a perfect example. The silver-over-red Spyder carries a presale estimate between $4.5 and $5.5 million, with the high estimate “just” half a million over the #1 condition (concours) value according to the Hagerty Price Guide. Based on the description and photos provided with the listing, this appears to be an older restoration with non-original engine in excellent #2 condition—we’ll get a better look when we see the car in person—so this estimate seems right in-line with the heated market.

Other early aircooled highlights include Gooding & Company’s 1965 Porsche 904/6 ($2.5 million to $3.25 million) and a new-to-market 1959 Porsche 718 RSK, the latter presenting as an excellently restored car carrying a pre-sale estimate of $2.5 to $3.5 million. The last example we have as reference was sold by Bonhams in 2020 for $2.2 million; as Goodings’ new-to-market car has a model-correct but unoriginal engine as well, the pre-sale estimate seems bang-on for the market.

In the obsessive world of 356s, RM Sotheby’s 1963 Porsche 356 B Carrera 2 2000 GS/GT will likely get the biggest bids with an estimate range of $450,000-$550,000, as this rare homologation special is close to the top of the hierarchy for late-model 356s. RM’s 1960 Porsche 356 Carrera Zagato Speedster “Sanction Lost” might be the wildcard of the entire sale—and potentially weekend. Zagato built nine continuation roadsters and nine continuation coupes back in 2016 after “discovering” the drawing for the uncompleted coupe in its archives.

The only reference sale we have for these weird and wonderful continuation cars is RM’s pair of both coupe and roadster last November, where they each sold for around $600,000. So, RM’s $450,000 to $550,000 estimate for this Speedster at Amelia seems fair, and maybe even a touch low.

Most of the more interesting winning bids will be cast on stuff with dihydrogen monoxide coursing through its rear. “A lot of the action seems to be in the later stuff,” said Rob Sass, editor-in-chief of Porsche Panorama. “Looking back at Scottsdale, we saw big money for Carrera GTs and 918 Spyders, but really, we need to look at the best from the watercooled era—996 and 997 GT3s and GT2s are really big right now, and 997 Turbos are super hot.”

This sector is where you need to look not for the biggest numbers, but the biggest variances against both estimates and established values. Surprisingly, there aren’t many significant watercooled 911s on the docket, implying Amelia might be the biggest battleground for the older stuff. Conversely, Scottsdale’s week-long blowout saw many a watercooled 911 cross the block, including that toupee-igniting sale of a low-mileage 2005 Porsche 911 Turbo S Cabriolet that took home $139,150.

Forget the trends – Amelia is still the place to be if you’re more focused on esoteric option codes and engine packages than you are about what mainstream production model might see the next surge in popularity. Attendees and general auction looky-loos can expect to overhear befuddlingly complex conversations regarding production numbers and comparative desirability if you stand next to a few Porsches on offer.

The nerdiest of which might be RM’s 1971 Porsche 914/6 outfitted with the obscure “M471” package. Never heard of this option group? That’s quite all right—only 23 914/6s were graced with this go-fast kit. Think of the M471 pack as Porsche’s pseudo-secret method of homologating the mid-engine sports car for SCCA C Production racing; purchasers of this option would find their new 914 fitted with steel fender flares, new front valance, wheel spacers, flared rocker panels, and Fuchs wheels. Yeah, not exactly the twin-turbo stage-3 RSR hop-up we were hoping for, but innate rarity, a motorsports connection, and previous ownership under well-known Porsche employees boosts the 914/6 M471 to a pre-sale estimate between $475,000 and $575,000. Compare this to RM’s standard 1970 914/6 that’s slated for $100,000-$125,000.

Our favorite anorak Porsche is RM’s 1991 Carrera 4 Lightweight. This one is rather conceptually simple; Porsche RS-ified 22 964 Carrera 4s for motorsports customers, replacing body panels with aluminum and fiberglass, with sound insulation and carpeting outright deleted. The tub was seam-welded, while the interior was made race-ready with integrated roll-cage, Recaro buckets from the 964 Cup, and a fire-suppression system.

Mechanically, the Carrera RS-spec 3.6-liter flat-six routed 265 hp to all four wheels through the rarer-than-rare mechanically adjustable power-split system, hardware initially developed for the Type 953 race car that ran the grueling Paris-Dakar rally. We’re big fans, going so far as to admit we’d probably take this rally-ready rarity over the hens-tooth 964-generation 1994 Turbo S offered at the same sale. The good news is that we’ll have to pay a smidge less than the $900,000-$1,200,000 estimate carried by the 380-hp Turbo S, with the Carrera 4 Lightweight’s estimate sitting pretty between $700,000 and $900,000. We’ve sold a few NA Miatas to make room in our garage.

Sass has his eyes on a different deep-cut Porsche. RM’s P-car portfolio at Amelia continues to impress with a red 1981 Porsche 924 Carrera GTS Club Sport. “With all of the activity in the 997 GT car market, and with the explosion in Carrera GT values, the transaxle cars have been overlooked lately,” he explained in an interview. “Naturally, that's where I’m looking. This one [the 924 Carrera GTS] will potentially set a record for a four-cylinder transaxle car, as it's an incredibly rare and special car wearing what amounts to delivery miles.”

If you’re more focused on Porsche’s domination on the circuit than the showroom, there’s a veritable squadron of Porsche race cars up for sale, all save one offered as part of Gooding’s Lloyd Hawkins collection sub-sale. The presence of motorsports Porsches at Amelia is nothing new, as Sass explains; “I’ve always thought of The Amelia as a motorsports concours. Porsche looms large in that world; you always see Derek Bell, Vic Elford, and legends like that showing up, so it’s only natural that the auction cars somewhat mirror the focus in the concours.”

Of the five top-tier historic 911 race cars on offer, none of them carry any sort of major in-period motorsports victories, though most were raced to competitive finishes in significant contemporaneous events. Gooding predicts the priciest of group will be the 1979 Porsche 935 campaigned at Le Mans by Interscope Racing, tagged pre-sale with a $1.7 to $2 million estimate. Complementing this is the Brumos Racing 1977 934/5 that placed 3rd overall at the 1977 12 Hours of Sebring, all yours for between $1 million to $1.3 million. Maybe.

Rounding out the turbo cars is a 1979 Porsche 935 at $1.5 million to $1.8 million, followed by a pair of naturally aspirated stunners. A 1974 Carrera 3.0 RSR that ran at the Targa Florio is pegged at $800,000 to $1.2 million shares the spotlight with our sale favorite— a legit 1974 Porsche 911 Carrera 3.0 RSR IROC. One of just 15 real IROCs built for the namesake series, this is arguably one of the most iconic and desirable 911 race cars ever built. This particular RSR IROC saw Gordon Johncock, Peter Revson, and A.J. Foyt grab the wheel, later competing in the 24 Hours of Daytona and 12 Hours of Sebring. Cool, right? Seems like a steal at a $1.1 million to $1.3 million estimate. 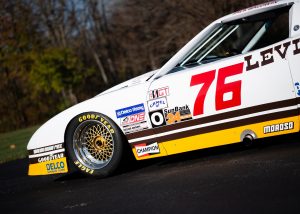 These six race-ready cars are up for grabs at Amelia