You don’t have to be a BMW connoisseur to realize this car is different. It’s a squat little thing, with two doors, an extra-long hood, flared fenders, and a stubby rear end. What’s truly special about the 2001 Z3 M Coupe, however, is that the deeper you look, the more fascinating it becomes.

The Z3 M Coupe is a rad little Frankenstein, first launched for the 1999 model year. Munich plucked its most powerful street-legal engine—the S52 straight-six from the contemporary E36-generation M3, and later, the S54 from the E46-generation M3—and shoehorned that into its smallest car with its shortest wheelbase and most antiquated rear suspension design. This was a passion project for the M division’s engineering team. Creativity was essential; the BMW board mandated a tight budget and the use of as many existing parts as possible.

Three hundred and fifteen horsepower in a tiny, rear-drive, German hatchback. There was nothing like it. In 21 years, we haven’t seen its equal.

Younger enthusiasts are noticing the M Coupe’s unique qualities. Gen-Xers are, by and large, obsessed with vintage SUVs, but Hagerty quote data reveals enthusiasm around the punchy little BMW. For context, Gen-Xers and Millennials together account for 52 percent of policy quotes we field for all enthusiast vehicles. Zoom into the Z3 M Coupe, and these generations account for over 67 percent. Compare the Z3 M Coupe to the Z3 M Roadster, and we observe disproportionate interest from the Millennial camp. Gen-Xers may be equally interested in the soft- and the hard-top model, but the younger generation strongly prefers the Coupe.

BMW used the straight-six architecture across its lineup (in “2.8” variants of the non-M Z3, for instance), but the 3.2-liter S54 got the good stuff: high-compression pistons, forged connecting rods, a 24-valve cylinder head that boasted BMW’s variable valve timing system (double VANOS, in Bimmer-speak), and scavenging oil pumps that helped keep oil where it belonged under high g loads. All that in a five-speed-manual-only coupe that weighed 300 pounds less than the M3. Spicy.

To BMW fans with old-school loyalties, this engine represents the end of an era. This engine was the M3’s final naturally aspirated straight-six, a format that many associate with the M division’s golden years at the turn of the 21st century. The V-8 and turbo straight-sixes that followed all have their merits, but BMW never replicated the thrill of the long-legged, linear, high-revving S54 in such a distinctive chassis.

About that chassis: M engineers knew that an engine alone does not a sports car make, and the Z3 M Coupe—more so than the Roadster—was equipped with an underlying structure to match. The Z3 platform contains a mishmash of components from the E36-generation 3 Series up front and older, E30-generation 3 Series semi-trailing suspension out back. BMW had already stuffed the popular roadster with M3 bits the year prior, but the Coupe version added gobs of structural stability to complement the utility and visual interest. At the time, BMW claimed that the 2001 M Coupe was the stiffest car it had ever made. All the body reinforcements made for the Z3 M Roadster carried over to the hard-top version, as did the limited-slip differential. To that, BMW added firmer rear springs and a slightly larger anti-roll bar. Additional door braces and a beefier windshield frame further strengthened the chassis as did, of course, the roof.

Despite its reputation for being a handful to control at the limit (Car and Driver emphasized its “delinquency”), the M Coupe is rather friendly below that dicey threshold. You won’t relish stop-and-go traffic, but the clutch doesn’t mind, and an hour-long drive can be enjoyed cramp-free. The rev-happy engine enjoys full exploration of lower gears. The five-speed is intuitively smooth, the gates solid and clear. Squeeze the throttle, and the hood rises visibly as the rear end hunkers down. It’s entertaining, every time. The straight-six sings up an octave with each number the tach needle passes, always eager to go higher. The front wheels seem so far away you feel as though you’re driving a chariot. Through mountain roads, the suspension is more compliant than you might expect. The car feels inviting instead of scary in the way it sets the hook and responds to inputs. The slide into delinquency is a slippery one.

The interior is more grand tourer than weekend racer. This was a time before carbon-fiber accents and chintzy build plaques were de rigueur. BMW instead serves up simple, clean lines, supple black Nappa leather seats, and a steering wheel that places your elbows nicely apart. The rim, thankfully, isn’t sized for Rachmaninoff. The cabin’s only questionable flair, in your author’s opinion, is the chrome: The shiny bezels around the gauges, dials, and shifter boot read as dated 21 years later, rather than retro. A satin finish would class them up perfectly.

The appeal is real. Even during Monterey’s notoriously swanky auction week—and on Cannery Row, a hotspot of exotic car watching—this coupe turns heads. The Laguna Seca Blue paint has something to do with it; the blue is tinged with just enough green to not belong in the ultramarine era of 2022. The soundtrack helps as well, since the athletic tenor of a naturally aspirated straight-six is nowhere to be found in modern showrooms. In the midst of dramatic blow-off valves and screaming, flat-plane-crank V-8s, the S54 is relatively understated. That funky silhouette does most of the work.

It may not be the lowest, the loudest, or the most powerful, but that’s part of the charm. Accessible performance, designed to delight. Without superlatives, this wonderful, oddball Bimmer stands alone. 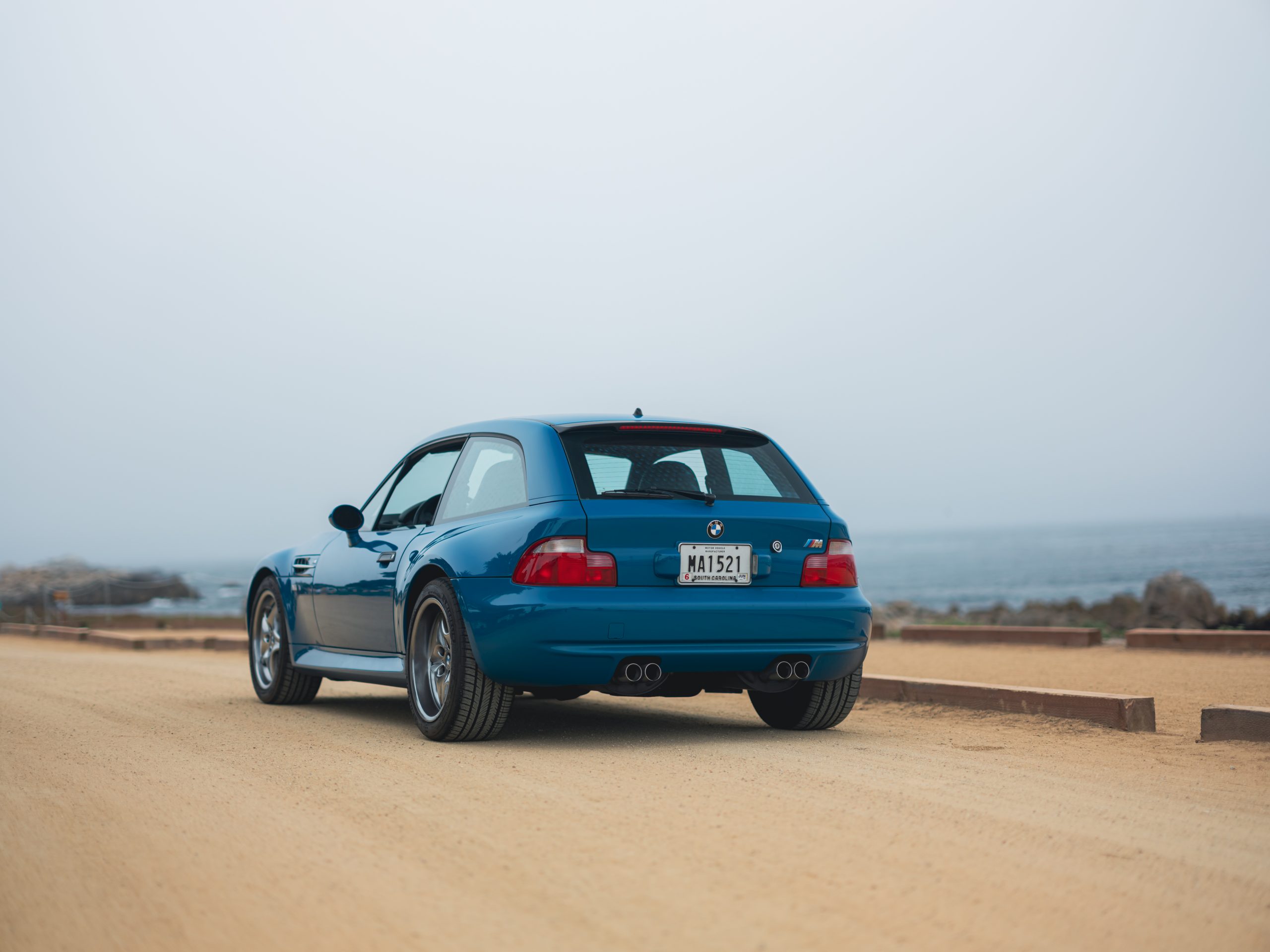 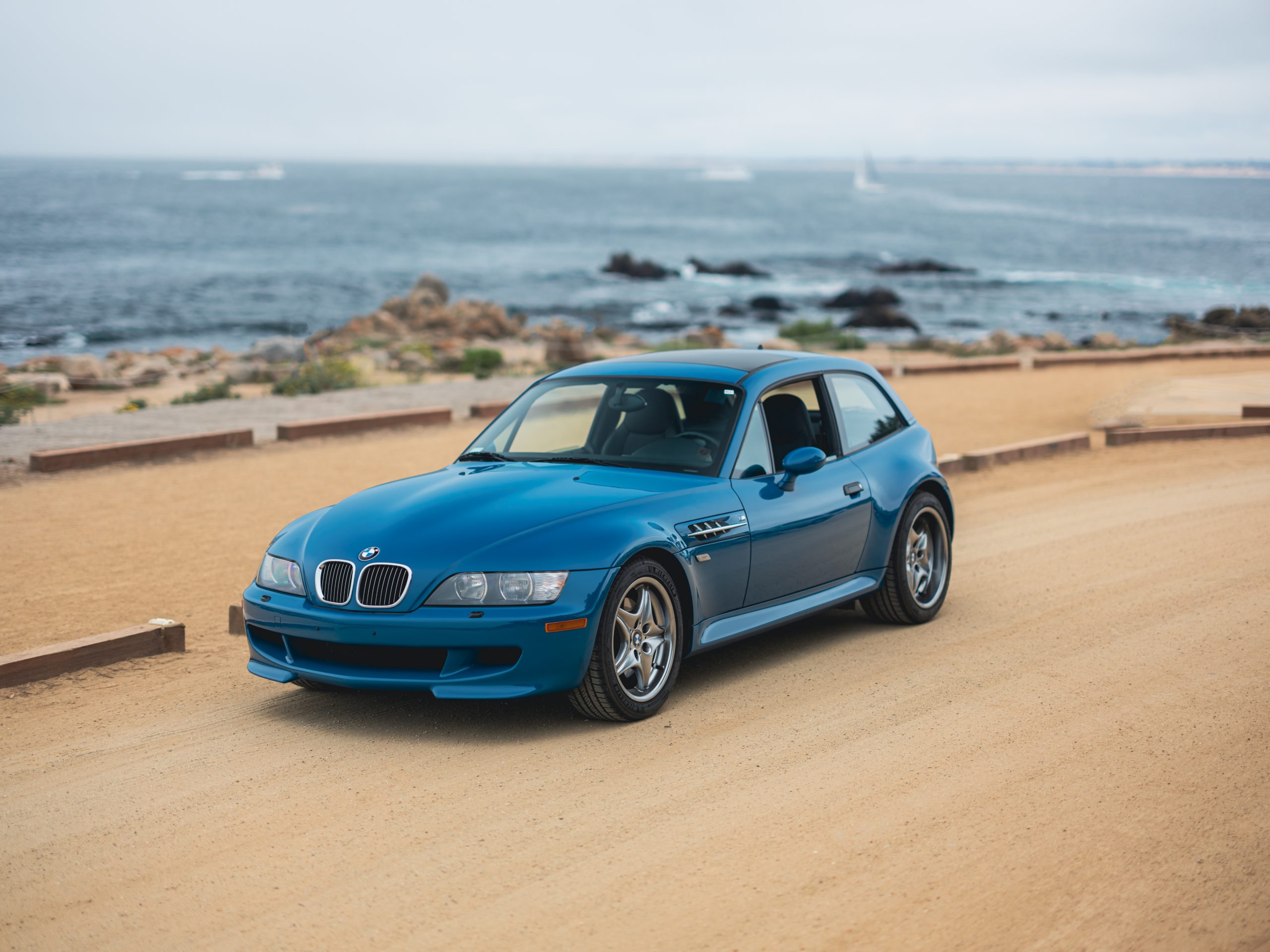