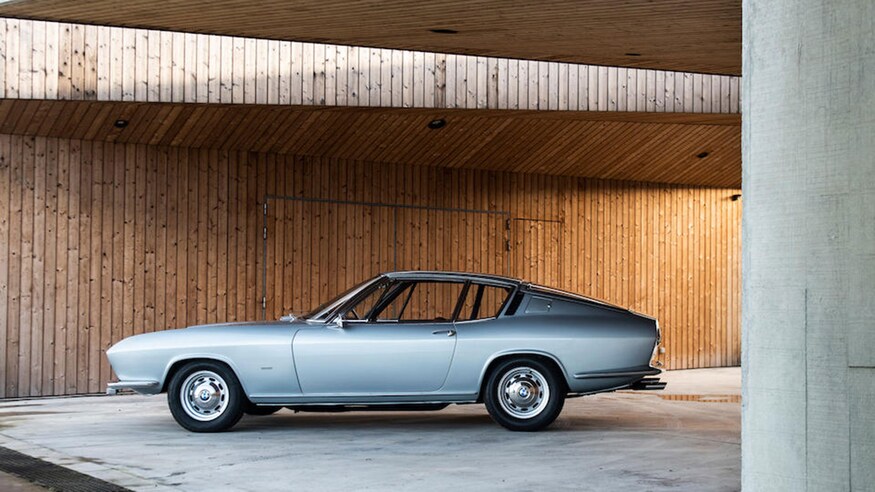 Evaluation: Older restoration | Good chrome. Metallic paint shines nicely, but there are a few large cracks on the left rear fender and a gigantic one on the left side of the tail. Dash top is fading, and the bottom of the windshield is yellowing. Switchgear is slightly worn and the gauges are a bit cloudy, especially the speedo, but leather and carpets are good. Restored underneath with light road wear. Not a car you’d take to shows, given the handful of major cosmetic flaws, but it’ll draw a crowd anywhere regardless. You wouldn’t even know it was a BMW were it not for the handful of badges and the tiny kidney-bean grilles. (And, in fact, it isn’t a BMW underneath; it’s a Glas.)

Bottom Line: Glas, also known for the Goggomobil microcars, as well as for
pioneering timing belts on an overhead-cam engine, came under BMW ownership in 1966. Some of Glas’s existing model line continued with a BMW badge for a short time then quietly disappeared. That included the range-topping Frua-penned 3000GT. The car at Bonhams’s sale, also by Frua, was to be the 3000GT’s replacement. It appeared at the Frankfurt and Paris shows in 1967 and in Geneva in 1968, painted a different color each time. BMW went with its own E9 series instead and killed off the Glas range, but the show car survived in private ownership in Spain before being restored about five years ago. RM offered it in Villa Erba five years ago to a high bid of €250,000, but it didn’t sell. Cosmetic issues aside, this price seems like a good value for a unique, beautiful car that would be a highlight—if not the star—of any BMW collection.