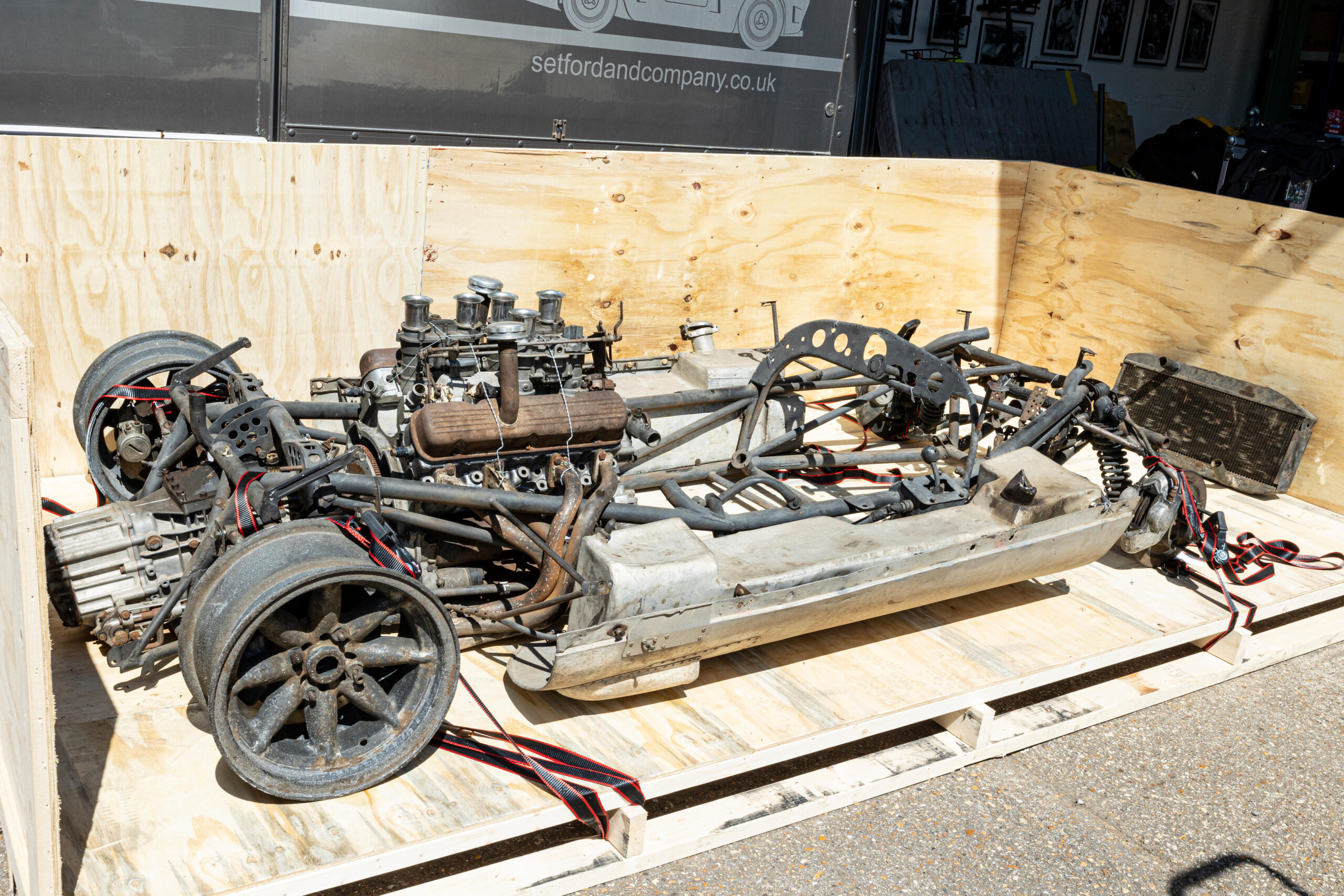 There’s no way to pretty this up: our Sale of the Week is a pile of bits. Some are rusty, some bent, quite a lot missing, but oh, what a story behind it.

Bonhams sent out a “teaser” catalog for the 2022 Goodwood Revival auction to their mailing list, a pocket-sized summary of each lot next to a photo. The picture accompanying lot 390 immediately drew my attention: it was Bruce McLaren smiling out from a green Cooper-Zerex Special racing car, with four bulbous fenders just about clearing the wheels, in pole position in front of the Goodwood grandstands. This was surely going to be one of the stars of the sale.

But then, when I reached the auction tent on viewing last Friday, it took me a while to realize that the same car—or at least the skeleton of it—was the lot on show, balanced on a white plinth. Two corroded rear wheels remained stuck on the back hubs, most of a seized engine with rusty cam covers squatting just in front of them. The tubular chassis, bent and battered, ran along to the front hubs, the tiny right-hand gearshift still standing proud.

And yet this twisted hunk of junk has an amazing story. First built in 1961 as a Formula 1 single-seater powered by a four-cylinder Coventry Climax engine, it was crashed by Walt Hansgen at that year’s U.S. GP, but then was modified with full bodywork and driven by Roger Penske to great success, winning at Laguna Seca, Riverside, and in the Puerto Rican Grand Prix. Modified for 1963 with Penske again behind the wheel, it then triumphed in SCCA races at Marlboro and Cumberland before traveling to Great Britain where it won the prestigious Guards Trophy event at Brands Hatch.

In 1964, the car was acquired by one Bruce McLaren, who continued the winning streak at Silverstone and Aintree, before having the car modified to use a 3.5-liter Traco-modified Oldsmobile V-8. Wins continued to come, both in Toronto and back at Brands Hatch. At the end of the season, it was sold to Texan driver Dave Morgan before changing hands around 1968 to a South American buyer. The body was finally stripped and the car left derelict until it was returned to the UK this summer.

There was no estimate for this lot, the catalog stating “refer to department.” This meant that even the specialists at Bonhams who consigned it didn’t know how attractive it would be to buyers. They soon found out: The winning bid was (after premium) £911,000 ($1,033,000).

A massive price tag for a mangled collection of parts. But what history those parts hold. The car is not only a proven race winner on both sides of the Atlantic in the hands of two of the most well-known drivers of their era, but it also has another story to tell: This was the very first car to wear the famous “Bruce McLaren Racing Team” badge. That makes it the ancestor to the M7C that scored points in every race it finished, the cars that won all 12 F1 driver’s championships taken by McLaren, all the American open-wheel racing and Can-Am successes, and even the F1 road car. Quite a big deal, then. Oh, and it’s being sold in the UK, which currently has the lowest exchange rate against the dollar since the 1980s.

This was a lot of money for a chassis, but I have no doubt that it will return, very soon, re-clothed in its original green body to the Goodwood Grid. Now that, I can’t wait to see.

As for the rest of the Goodwood sale, held with the always wonderful Goodwood Revival as a backdrop, initial result put the sell-through rate at 67 percent with a few notable misses but also some truly impressive sales and surprises, including the ex-McLaren Cooper above. Several of the most significant, surprising and downright interesting cars are examined in detail on the pages below.

by John Mayhead
22 September 2022
Showing of 7 articles. No articles.