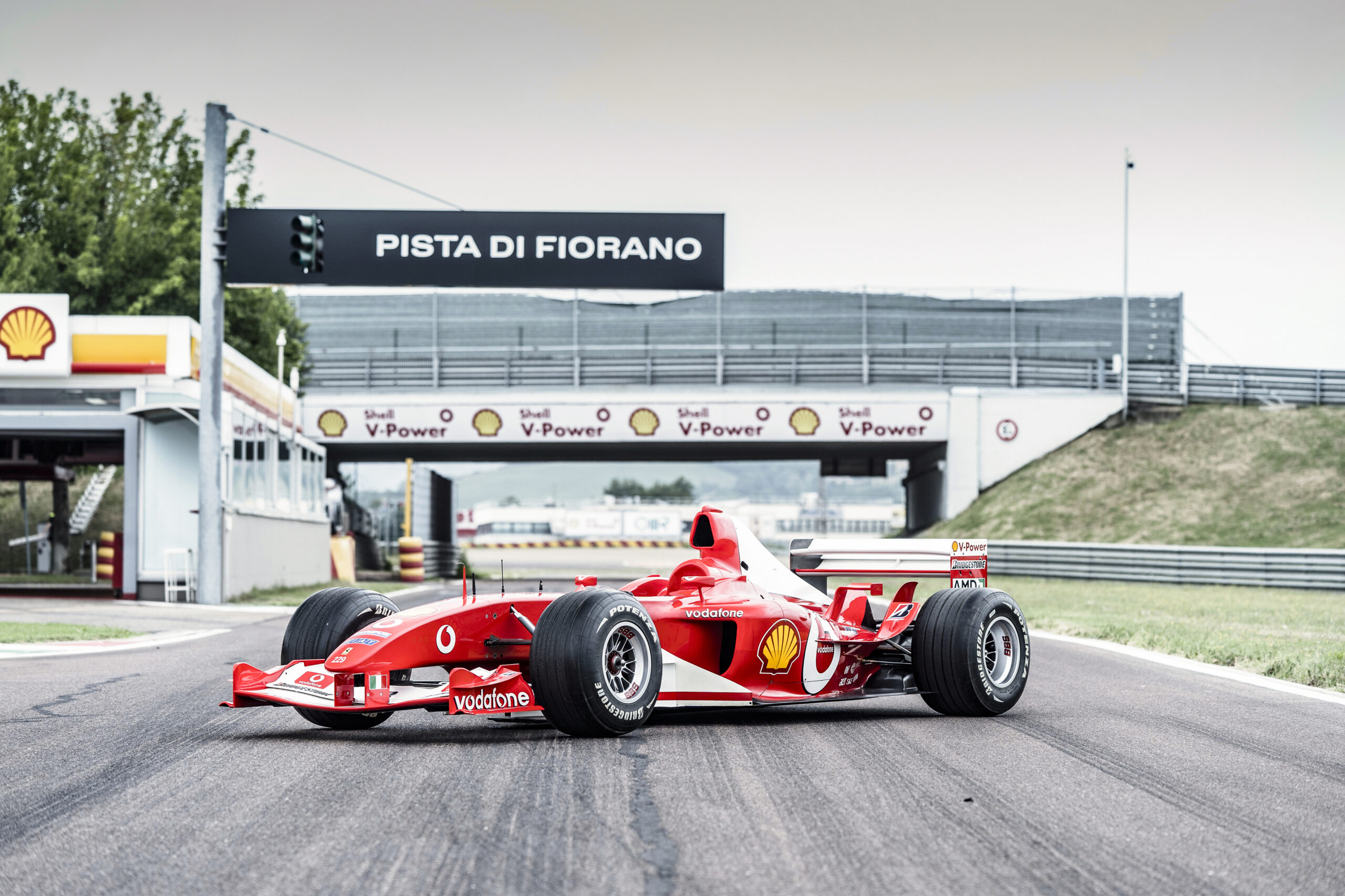 With record attendance and viewership plus three(!) races on the 2023 calendar, Formula 1 is enjoying unprecedented popularity here in the States. We can thank Netflix for that, mostly. That wildly successful docuseries Drive to Survive has brought in a whole new generation of fans to pick their favorite driver and enjoy today’s greatest on-track battles—Hamilton vs. Verstappen, Red Bull vs. Ferrari, Latifi vs. the wall.

Indeed, F1 has a lot for race fans to be excited about these days, but for those of us of a certain age who liked F1 before it was cool, it’s the sight of Michael Schumacher in a bright red Marlboro-liveried Ferrari and the shriek of V-10 engines that stirs up the most emotion. One such car sold this week, and it brought 14,630,000 CHF ($14,873,327), more than any other modern Formula 1 car.

Technically, it didn’t even sell at a car event. Although RM Sotheby’s just held a glitzy collector car auction in London last weekend, the ex-Schumacher Ferrari F2003-GA sold during the Sotheby’s Luxury week, a series of auctions in Geneva that “showcases the best of the best in each discipline—elevating luxury to the level of art.” Held at the Mandarin Oriental, a Geneva hotel overlooking the Rhône, the series of auctions features jewelry, watches, collectible handbags and even a collection of Fabergé pieces, but only one Ferrari.

And what a Ferrari it is. An F2003-GA, this chassis (number 229) was Schumacher’s mount for much of the 2003 season. That was right in the thick of the period when Ferrari’s Ross Brawn/Jean Todt/Michael Schumacher dream team brought home five straight Drivers’ and Constructors’ Championships from 2000-2004. The year before in 2002, Schumacher won the Drivers’ title by a whopping 67 points, and the runner up was his teammate Rubens Barrichello. The 2003 title, however, would prove to be a lot closer.

The new F2003-GA (named for the late Fiat boss Gianni Agnelli), wasn’t ready until the fifth round of the season at the Spanish Grand Prix, and compared to the F2002 it replaced it has a longer wheelbase and longer 3.0-liter V-10 engine, rated at 845 horsepower. Schumacher took pole and victory in Spain driving car 229, then did the same at the next round in Austria. At Monaco he qualified 5th but finished on the podium. Then he won in Canada, took 5th at the European GP, and finished 3rd at the French GP.

After using a different chassis for the British, German, and Hungarian rounds of the ’03 season, Schumacher was back in car 229 for Monza. In front of the Italian crowd he pulled off a hat trick (pole, fastest lap, victory), then won the US Grand Prix at Indy. His eighth place finish at the final round in Japan gave the German his sixth title (2 points ahead of Kimi Räikkönen at McLaren-Mercedes) and Scuderia Ferrari its 13th. With that sixth championship (of an eventual seven), Schumacher broke the five-title tally of Juan Manuel Fangio, a record that many thought would never be broken. Car 229 is the car that clinched both those titles, and its final tally is nine races with Schumi at the wheel, five wins, three poles, and two podiums.

The car was also overhauled in 2022 by Ferrari’s Formula 1 Clienti department, so unlike many computer-strapped twenty-first century F1 cars, it isn’t just expensive garage art. It’s ready to drive/demonstrate/terrify you, too. It was even given a shakedown by Michael’s son Mick at Fiorano in the weeks leading up to the sale, and through the F1 Clienti program Ferrari will (for a price) keep historic F1 cars running and driving. From both a usability and collectability standpoint, then, it’s hard to think of a more desirable modern Grand Prix machine than this.

This isn’t the first time a historically significant car sold through an art auction, rather than a collector car event like Pebble Beach or Amelia Island. That $7.5M Schumacher Ferrari sold at a contemporary art sale in New York, and so did the $14.84M trio of Alfa Romeo/Bertone B.A.T. cars that sold in 2020. But aside from making us want to write clichés about “rolling sculpture,” these cars-as-art sales always remind us just how cheap collector cars are, even record-smashing ones like our sale of the week, compared to the big guns of the art world. The very same day someone was shelling out nearly $15M for this racing icon, Christie’s sold a Georges Seurat painting for nearly 10 times as much, at $149.2M. Just a little perspective for you.

by Andrew Newton
11 November 2022
Showing of 0 articles. No articles.