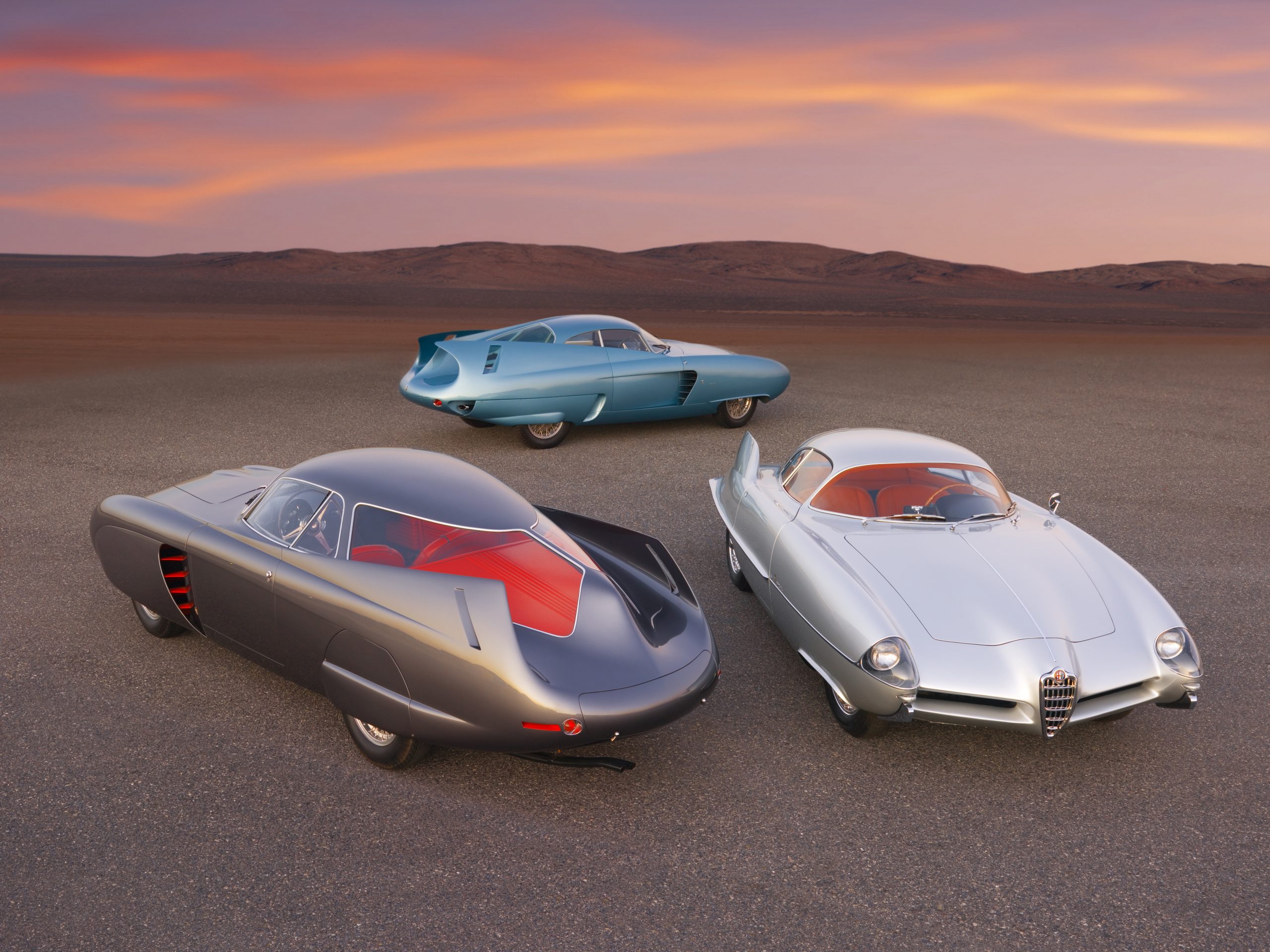 Let’s think for a moment about “art”.

There also is physical art, such as that concieved by Franco Scaglione and rendered by the artisans at Nuccio Bertone’s coachworks in the early Fifties: The three Alfa Romeo 1900-based Bertone design exercises know as Berlina Aerodinamica Tecnica or B.A.T.

They were offered by RM Sotheby’s at Sotheby’s Contemporary Art Evening auction on October 28. Sold at a $13.25 million bid ($14.84 million with the buyer’s premium), the B.A.T.s were the top selling lot in the Evening Contemporary Auction, beating works by Jasper Johns, Alexander Calder, Frank Stella, Andy Warhol, Mark Rothko, Ed Ruscha, Jean-Michel Basquiat, and Carlo Mollino. It was the only lot in the sale to post a result in eight-figures. (About architect/artist Carlo Mollino there is more later.)

The group of three had been put together some years ago by an American collector and had been exhibited occasionally at concours d’elegance and even at an Alfa Romeo model introduction.

Their inclusion in Sotheby’s Contemporary Art Evening auction came as something of a surprise. It was announced less than two weeks before the sale, which itself had been pulled forward from its usual early-mid-November date.

The three B.A.T.s broke new ground in the early Fifties, not only on account of their extravagant exuberance but also because they worked. Conceived and laid out by Franco Scaglione without the aid of wind tunnels or as yet undreamed-of computational fluid dynamics, they were Scaglione’s freehand concept of aerodynamic efficiency: brilliant, rare objects of form following function.

B.A.T. 5 and B.A.T. 7 were strictly Bertone projects, leveraging Scaglione’s vision with Nuccio Bertone’s acumen to demonstrate the carrozzeria’s talents. By 1955, however, Alfa Romeo realized the connection with the B.A.T.s was boosting its own reputation, so the manufacturer collaborated with Bertone and Scaglione for B.A.T. 9, a more restrained design identified with an Alfa Romeo Giulietta grille.

Sold as a single lot, the B.A.T’s were up for grabs for five pre-qualified registered bidders. Sotheby’s did a half-hour video preview before the auction started. In the end, the B.A.T.s went to an established RM Sotheby’s client, selling for close to RM’s presale low estimate of $14 million.

In 2017, a Ferrari F2001 Formula One car sold in the same Contemporary Art Evening auction for the astounding price of $7,504,000. That was less “art” than showmanship. The 2020 sale of the B.A.T.s, however is all about the cars’ artistic sensibility, their originality, and the craftsmanship with which they were executed by the Bertone artisans.

We were able to break COVID containment to inspect these remarkable works in person at Sotheby’s headquarters. Descriptions of each follow.
Footnote:And Carlo Mollino? A multi-talented architect, designer, athlete and even aerobatic pilot, Mollino designed automobiles, including a Bandini 750 Sport Siluro, an imaginative two-fuselage “catamaran” that competed in the 1955 Le Mans 24 Hours that had been offered by RM at London in 2015 with a high bid of about $160,000.

Mollino also had created a concept for a small-displacement inverted airfoil speed record car in the Fifties that wasn’t built until 2006 when a full-size model was created by Stola for the Mollino Foundation. RM sold it at Sotheby’s in the “Driven by Disruption” auction in 2015 for $71,875.Sotheby’s Contemporary Art Evening Auction offered a Mollino table that sold for $6,181,350. That was 42 percent of the final price of all three B.A.T.s. Go figure. –Rick Carey