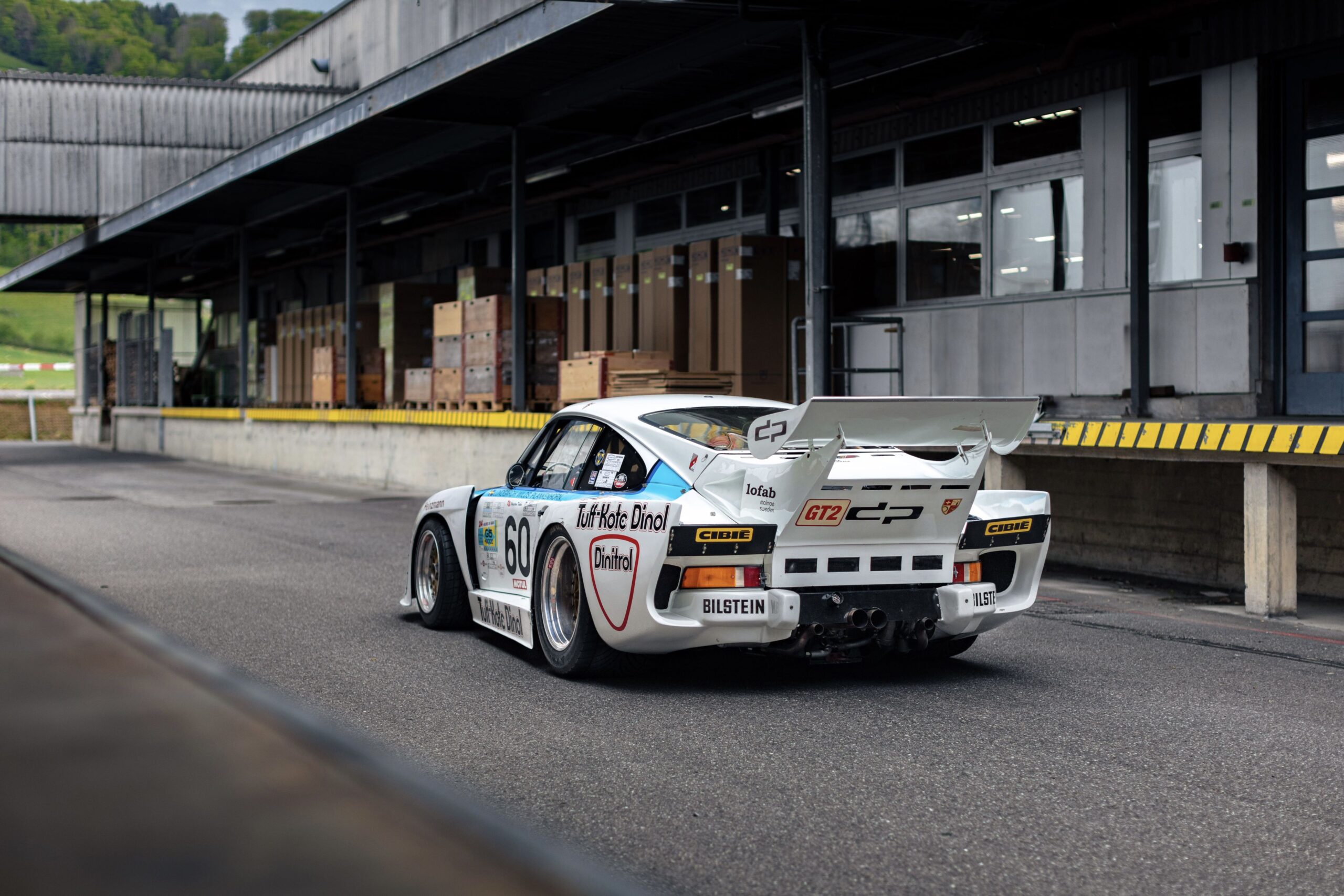 With the Goodwood Festival of Speed now in the rearview mirror, the historic racing calendar turns to the Le Mans Classic this weekend. And, like Goodwood, there’s an auction full of delectable cars happening in conjunction with the event. Artcurial—best known in the car world for its Rétromobile sale—will be auctioning 137-vehicles on July 2nd, including historic racers, sports cars, GTs, modern collectibles and quite a few oddballs. Ever heard of a Bianco, a Teilhol Tangara, a Hommell, or a Tracta-Grégoire? Neither have I, but they’ll all be at Le Mans, along with 19 bikes and automobilia.

Here are the 9 coolest and most significant cars we’re keeping an eye on.

This car is a 935 “Baby” built by Swedish driver Jan Lundgardh in 1980. Lighter than a standard 935 and boasting 370 bhp, the “L1” raced at Brands Hatch, Le Mans, Nürburgring, and Silverstone but was plagued by reliability issues the whole 1980-81 seasons. In 1982 Lundgardh wisely swapped in a more conventional and more powerful 3.0-liter unit. Then things started looking better, the best result being a GTX class win at the Nürburgring 1000km in 1984.

Today, the L1 is still an active racer, including at events like the Le Mans Classic and Oldtimer Grand Prix, and has reportedly clocked up several wins and podiums on the historic racing scene. Still powered by a 3.0-liter engine, it wears its original 935 K3 body panels and has never been wrecked.

There’s an old quip about the Mercedes-Benz 600—it’s a dictator’s car. There’s some truth to that. Once the world’s most expensive automobile, the 600 can count Saddam Hussein, Ferdinand Marcos, Chairman Mao, and Saddam Hussein among the list of former owners.

And here’s another one. One of 428 long-wheelbase 600 Pullmans built (out of 2677 total 600s) and fitted with a rare factory rear sunroof, it was supplied new in 1971 to Société d’Equipement pour l’Afrique Gabon, supposedly for use by Gabonese leadership and the entourage of Omar Bongo. Now, Bongo might not be a household name, but he was the West African nation’s president from 1967 to 2009, and he became fabulously wealthy thanks to oil revenue and alleged corruption.

As for the Mercedes, it was reportedly restored in Brussels at a cost of over €90,000 and had a full fluid service earlier this year.

The Giulia GTA (Gran Turismo Allegerita, or lightweight) was a Giulia put on a diet/steroids by Alfa’s racing arm, Autodelta. The Bertone-penned bodywork was changed to 1.2-mm thick panels out of an alloy called “Peraluman 25,” while Autodelta stripped the interior and added plastic side windows. Underneath, Autodelta modified the suspension, added closer gearing for the transmission, and gave a new twin-ignition cylinder head to the engine along with dual 45-mm Webers. For homologation, just 500 GTA 1600s were built between 1965-68, plus a similar number of 1300-cc Giulia GTA “Juniors.”

This GTA sold new to French racing driver Dominique Thir, who ran it competitively, including a class win, at rallies and hill climbs for a couple of years. Its second owner also won his class at the 1968 Ardennes rally, and its third owner won his class at the 1969 Mont Jura hill climb before stripping it down and putting it in crates in preparation for a restoration that he never started. In 2013, it sold to its current owner who had it fully restored.

Having just clinched its fifth straight victory at Le Mans, Toyota is on top of the world in endurance racing. It wasn’t always that way. Toyota’s endurance racing exploits go back decades, with plenty of ups and downs. This car dates from the company’s efforts in the mid-1980s, when companies Dome and TOM’s (Tachi Oiwa Motor Sport) were charged with developing Group C cars for the Japanese giant. After a promising 12th place finish for the team at Le Mans in 1985 with the 85C, the 86C arrived the following season with lower weight and modifications to the 2.0-litre supercharged engine that brought a full 900 bhp.

Although TOM’S and Dome didn’t record chassis numbers or explicitly label their cars, Artcurial represents this as the only remaining factory-campaigned car, as confirmed by TOM’S. The current owner bought it directly from the team in 1990, then displayed it in his museum in 2017 and finally had it restored that year to its original 1986 configuration.

With its tubular ladder-type chassis, independent front suspension, hydraulic brakes and overhead valve straight-six with hemispherical combustion chambers, the BMW 328 was one of the quickest, most advanced and best prewar sports cars. Beginning in 1934 Britain’s official BMW importer AFN Limited (aka Frazer Nash) got permission to import the 328 to the UK, it was sold as a Frazer-Nash BMW. Aside from Frazer-Nash text on top of the blue-and-white BMW roundel, it’s the same great race-winning roadster.

This 328 sold new to Viscount Curzon, later Earl Howe, who raced it in hill climbs and speed trials and also “drove the car on the road whenever I had the chance. The car never let me down.” Howe sold it after the war, and by the 1970s it had a later Moss gearbox and Bristol cylinder head. In the 1990s, a connecting rod broke and ruined the engine block, which was later replaced. From 2013-15, the car went to BMW Classic for a full restoration to the tune of nearly €200,000.

Credited as the first mid-engine production car and wrapped in a slippery fiberglass body, the René Bonnet Djet was well ahead of its time when it came out in 1962. About 200 were built before Automobiles René Bonnet was taken over by Matra, who sold a further 1500 Matra-badged cars with slightly altered bodywork. Fun fact: Matra gave a Djet to Yuri Gagarin (the first man in space) during his 1965 tour of France.

This car is represented as one of the three original Djet prototypes, distinguished by their tube frame (later Djets got a heavier backbone chassis). While the other two prototypes raced at Le Mans, this one was reportedly used as a factory demonstration car before being restored at the factory in 1963 and sold into private ownership. Restored about 10 years ago, this nifty French fiberglass coupe is eligible for the Tour Auto and the Le Mans Classic.

One of the major highlights of the Le Mans Classic auction this year is the Pierre Héron collection of 24 French automobiles, all in barn find condition after sitting for 40 years. Along with a Talbot Lago T26, this Delahaye 135M is the highlight among all the scruffy projects.

Shown at the 1948 Paris Motor Show and again at a retrospective exhibition at the 1963 Paris Motor Show, it was bodied by Figoni et Falaschi and is one of a reported 18 cars to wear the “El Glaoui” coachwork, named after the Pasha of Marrakech who was the first to order it. Héron bought it in 1969 and reportedly drove it regularly in Paris. Today, though, it’s in total barn find condition. Dust and all.

For Senna fanboys, Alain Prost is just Ayrton’s antagonist, but we can’t forget that the Frenchman is a four-time world champion with 51 Grand Prix wins (the fourth most of all time) as well as a former team owner. And with two ex-Mansell race cars having just sold (1989 Ferrari 640 for €3,605,000 and 1991 Williams FW14 for €4,055,000) F1 fans will be watching this ex-Prost Renault closely. An all-French racer offered in its home country by a French auction house, it should do well.

Renault ushered in the turbo era of Formula 1, first in 1977 with its 1500cc four, and finally overcame teething problems and reliability nightmares with a first win at the 1979 French GP. This car dates from the 1983 season, Prost’s last with Renault, as he was fired for criticizing the team late in the year and moved to McLaren for 1984. In RE40/03, Prost won at Spa and snagged a podium finish in Monaco, while in another RE40 he won the French, British, and Dutch Grands Prix. He finished second in the Drivers’ Championship, just 2 points behind Nelson Piquet. RE40/03 was also used for test sessions by Prost and teammate Eddie Cheever, and was cosmetically restored in the 1990s.

The most valuable car on offer at Le Mans this year, this Maserati sold new in France and has some period race history there, including a first in class finish (6th overall) at the Tour de France and 4th at Monza as well as an early retirement at the Mille Miglia. It then raced in South America and sold to a buyer in Venezuela, but by the early 1960s it had sold to California and reportedly sat outside at a coconut plantation in La Jolla until 1977.