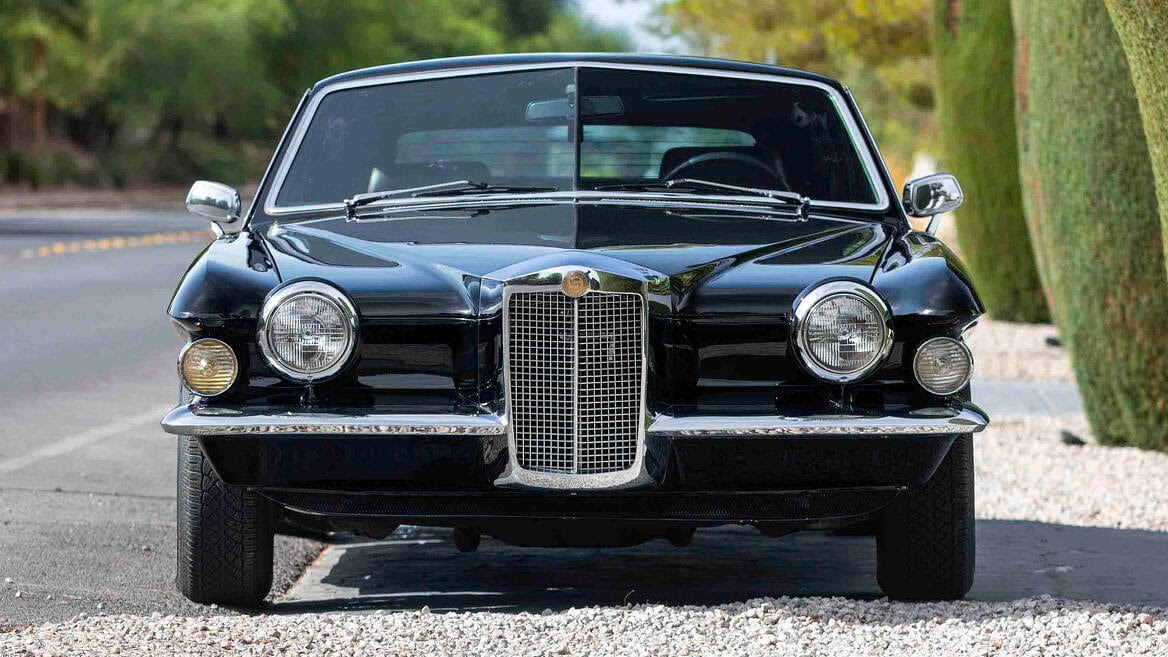 Last weekend in Vegas, some lucky hound dog strapped on their blue suede shoes, decided it’s now or never, and had a hunka hunka burning love ($297,000 worth) for the King of Rock and Roll’s 1971 Stutz Blackhawk. Suspicious minds might be all shook up at such a price, but as Hagerty’s Power List has shown, ex-Elvis cars have collector cachet like few other celebrity-owned automobiles.

The average Presley premium found by Hagerty is 229 percent, but but the $297K price for this one is less than 100 percent over its condition (#3+) value in the Hagerty Price Guide. Even so, it’s a record price for a 1971-87 Stutz Blackhawk.

Elvis owned a lot of cars and bought a lot more as gifts for friends, colleagues and co-stars. Cadillac is probably the brand most associated with the King, but he had a close connection with Stutz as well. Three decades after the original Stutz Motor Company went bust, in 1968, a New York banker revived it, and coaxed legendary ex-Chrysler designer Virgil Exner out of semi-retirement to do the styling. This reborn Stutz Blackhawk utilized mostly Pontiac running gear, although later ones used different GM platforms.

Assembly was done by Italian hands at Carrozzeria Padane, who also assembled Maseratis, and the cars were lavishly equipped before shipping back to the United States. It’s no wonder that the Stutz was the world’s most expensive car when it came out. Of the 500-600 built, Elvis bought the very first (not this car) in 1971, vying with Frank Sinatra for the privilege but eventually winning out.

Apparently Elvis liked the Stutz, because he eventually bought five in total. Following an unknown period of ownership, he gave this ’71 to his doctor Elias Ghanem. It was a token of gratitude after the King got through a bout with pneumonia. It was detailed by George Barris, and a plaque on the dash reads “Elias Ghanem | A True Friend | Elvis Presley.” According to an article in People magazine, Presley also bought the doctor a Mercedes, two watches, a diamond ring, and a gold medallion. A true friend, indeed!

Ghanem might not be world famous, but the Vegas physician made a name for himself as something of a doctor to the stars in the 1970s, treating “Vegas throat” (throat irritation from Nevada’s desert climate) for Tom Jones, Liberace, and Johnny Cash as well as Elvis.

One might think that Elvis, who died at 42 years old after years of prescription drug use, probably needed a better doctor. But Ghanem was just one of several physicians seen by Presley, and the one who prescribed most of the drugs to him was a different doc named George C. Nichopoulos. He was even indicted in 1980 on counts of overprescribing stimulants, depressants and painkillers to Elvis as well as Jerry Lee Lewis, but was acquitted. Ghanem, meanwhile, purportedly tried his best to curb Presley’s pill-popping.

All to say, our Stutz is not tainted by a connection to Elvis’s undoing (although we’d be kidding ourselves if we said no one would be interested in such macabre provenance). There are period photos showing the doctor with a white Stutz, so the car has at least been repainted, but otherwise it presented as mostly unrestored but well cared for on the auction floor at Mecum Vegas. It’s also a 1971 model, which is more special and a lot more valuable than later Blackhawks for several reasons. First, they’re rare, with barely two-dozen built. And given their high cost plus the exclusivity of low numbers, the list of ’71 owners is a Who’s Who of American entertainers, including Dean Martin, Sammy Davis, Jr., and Lucille Ball. The ’71 cars were also built to more exacting standards and better-equipped. Faced with the mounting costs of buying a new Pontiac, tossing half of it in the garbage bin and buying it a round trip to Italy for new clothes, Stutz cut some costs and gave later cars more Pontiac bits as well as less attention to detail.

Elvis and Elias’s Stutz was last seen at auction in 2015 and had estimates as high as $400k, but it didn’t meet reserve. This result in 2022, though, is probably as much as the seller could have hoped for, particularly since it crossed the block in Las Vegas—a place still visibly obsessed with Elvis.

We’ve covered how difficult it can be to put a price on fame, and although Elvis was both a household name and a known car fan, he also gave away automobiles to people like they were Tic-Tacs. Cars sometimes pop up for sale advertised as “bought new by Elvis,” with no proof that he ever even sat in the thing. This car, though, has a deeper Elvis connection than most and comes from a brand he was closely associated with, so the hefty price makes sense.

If cars are always on your mind but you’re looking for a little less conversation about Elvis (and fewer puns), check out some of the other interesting and significant sales from Mecum Las Vegas 2022 below.

by Andrew Newton
18 November 2022
Showing of 5 articles. No articles.