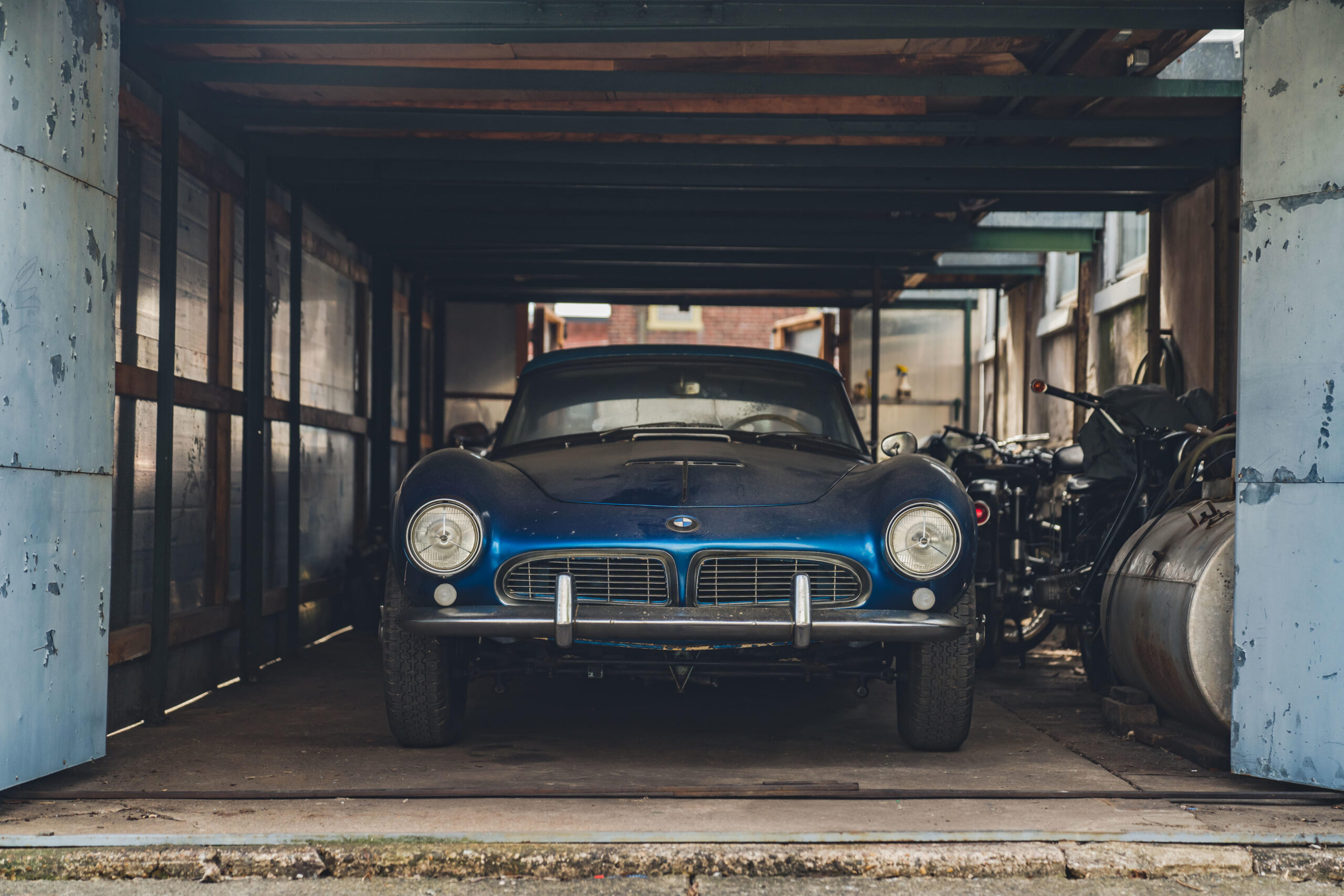 We love a barn find. The rarer and pricier the car, the more exciting. There’s a buried treasure element to unearthing a valuable classic, and it fuels many a car fan’s daydreams. Gets us wondering what’s behind that old garage door in your neighborhood that never seems to be open, or what’s under that tarp you pass on the way to work.

Most of the time the answer is nothing special, but in the case of one small, shabby-looking garage building in Philadelphia, what was hiding inside was an example of the most beautiful, valuable cars to wear the BMW beachball, tucked away since Jimmy Carter was in the White House. The star of Bonhams’ second annual Audrain Concours auction in Newport, RI, this long-dormant BMW 507 Series II sold for $2,315,000.

It may be the most valuable BMW now, but in its day the 507 almost sank the entire company. Designer Albrecht von Goertz penned a gorgeous shape and BMW’s 3.2-liter aluminum V8 provided impressive performance that won praise in the automotive press. But for the then-small company, an original target price of $5000 quickly went out the window, then nearly doubled to $9000 and eventually topped $10K. So although it sparkled on the road, it bombed in the showroom. BMW still lost money on each one. People with unlimited budgets like Elvis Presley or King Constantine II of Greece bought one, but the 507 just didn’t make sense to most of the sports car buying public.

A 1957 Corvette started at a little over 3 grand. A closer to home rival, the Mercedes 300SL, was barely more expensive than the BMW and offered a lot more performance. Despite the considerable investment in the car and an initial target of 5000 units a year, BMW built just 252 examples. Only by getting an infusion of cash from businessman Herbert Quandt and by doubling down on small cars like the 700 and the New Class were the Bavarians able to keep the lights on.

Why is this colossal failure a seven-figure dream car, then? Well, “profitability” isn’t on the list of what makes a car great. The 507 is a thing of beauty (that inspired the 1998-06 Z8), a sparkling performer, and extremely rare. Rare for a reason, sure, but rare nonetheless. And as BMW has become a global brand with a thick back catalogue of great cars, the 507 stands out as a bright spot (design-wise, anyway) in the company’s increasingly rich history.

The 507 has been a seven-figure car for many years now and it's newsworthy whenever one shows up for sale, but the car from Audrain also shows that even in 2022 there are still million-dollar automobiles out there just sitting in sheds, so never stop dreaming.

Wearing chassis no. 70059, it sold new to an American expat businessman living in Venezuela. He then moved the car up to Canada with him in 1961, and by 1979 it had been repainted in the Pontiac Bright Blue Metallic it still wears today. It sold that year to a BMW collector in Philadelphia for $22,000, mostly as a spare car in case something happened to his other 507. It was started occasionally, but spent most of the last 43 years sitting.

The three most desirable options on a 507 are a factory hardtop, Rudge wheels, and disc brakes. This car has the top and the wheels, but barn find mystique made up the biggest chunk of this result. Bidders let the incorrect paint and general scruffiness slide, choosing instead to focus on the unrepeatable preservation. The car is in #4 (Fair) condition. The $2.315M price is nearly the condition #2 (Excellent) value in the Hagerty Price Guide. While not a record (racer John Surtees' 507 sold for £3.8M/$4.6M at auction in 2018), this is an impressive, estimate-beating result.

Our colleague Rick Carey attended the sale and inspected cars in person for us, which are outlined in detail on the pages below. He noted:

"Newport isn’t Monterey, but with the effort put into Car Week by Donald Osborne and the Audrain staff, supported by the enthusiastic Motoring team at Bonhams, it gets better every year. The early Fall weather in New England could have been more cooperative this year, however."

by Andrew Newton
7 October 2022
Showing of 7 articles. No articles.