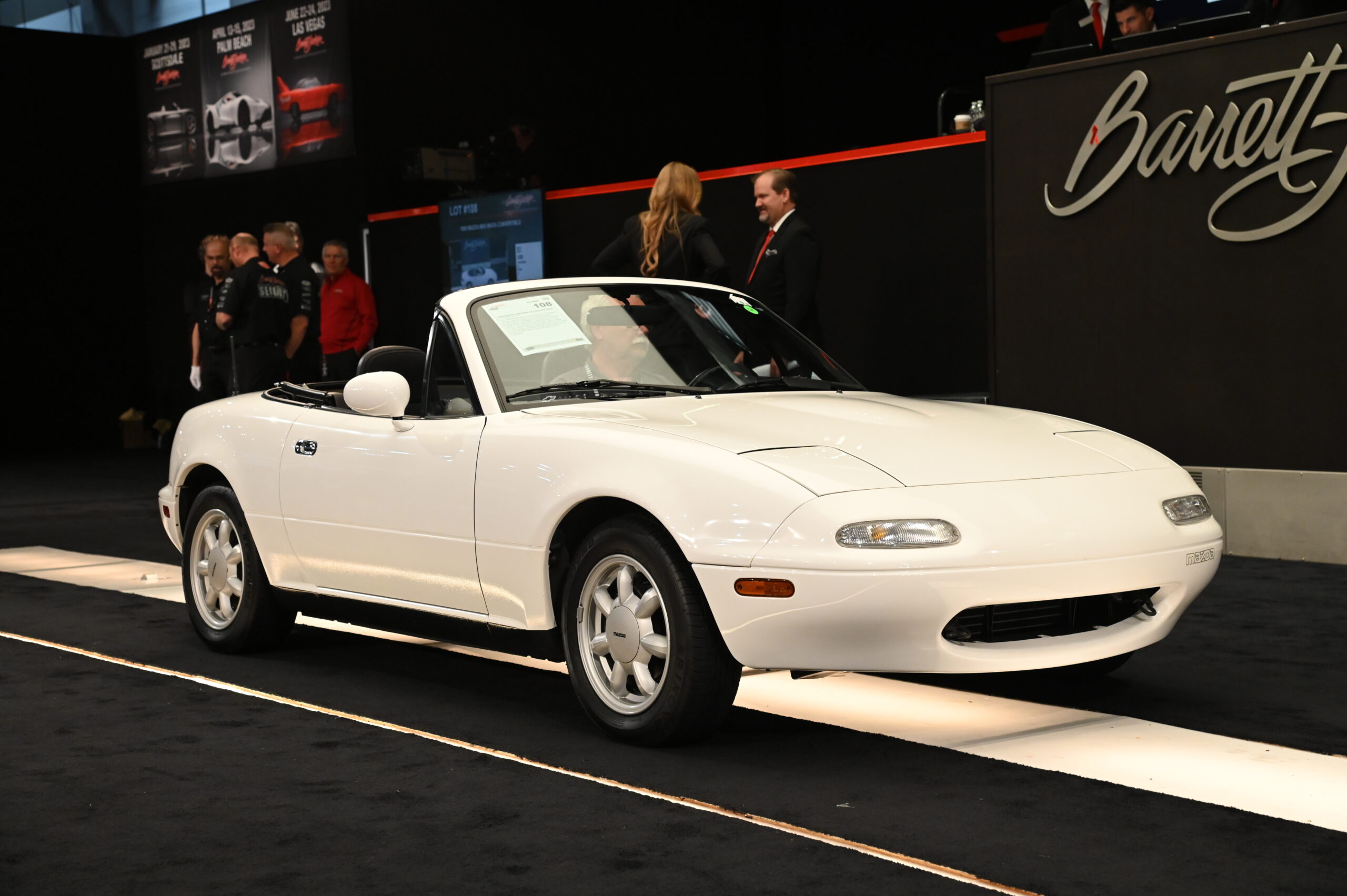 We knew this time was coming. Those of us who’ve owned a Miata or three have alternately lamented the model’s rising values as a matter of principle (cheap convertibles have been a sports car institution, and the Miata’s carried that flag for decades) while also cheering that ours are now worth that much more. This week’s Barrett-Jackson sale of YouTube personality Tyler Hoover’s 28,000-mile 1990 Miata for $27,500 is a strong signal that the Miata has attained its rightful status as a collector car.

Hoover’s presence as an affable online car guy may have helped boost the sales price a little, but probably not by much; our data indicate it takes significant fame to really drive sale premiums. This isn’t a record for an unmodified Miata, either—that goes to this 1993 Limited Edition, which sold for $36,750. That said, this is a high-profile sale that sheds light on an emerging trend of low-mileage NA Miatas crossing auction blocks for more than $20,000.

What’s even more compelling is that this car is relatively pedestrian. Mazda offered quite a few special trims over the years, including the 1993 Limited Edition, the R-Package, numerous M-Editions, and several rare colors that command decent premiums over the base cars. While not one of these more desirable trims, Hoover’s base car represents a clean, mechanically sound example with a few options. The engine bay looks as if it left the factory only a couple years ago, and the Crystal White paintwork is bright. The usual slight color fading on the cloth seats is to be expected on any car that isn’t a museum piece.

In contrast to many recent value spikes, Miatas started their slow ascendancy well before the pandemic. While barely inching up through the early part of the last decade, #2-Condition and lower cars started to see real bumps in value in 2018. What's more, even though the Miata's ascendancy has slowed somewhat in recent months, it's still outpaced inflation. Mazda's little backroad carver appears to have built its value bump on its solid reputation and the fact that good cars are getting harder to find.

Who's hopping into first-gen Miatas? Everyone, but primarily kids, which bodes well for people who espouse themes like "save the manuals" and "Never Stop Driving." Gen Z accounts for an amazing 27% of quotes, despite making up only 7% of the market. Millennials follow with 23% of quotes, a couple percent ahead of their 21% market share. Gen X's share of quotes is 20% while the Boomer number lands at 26%, both under their respective market shares. Even Pre-Boomers get in on the action, with 4% of quotes. In a world of ever-increasing horsepower, the happy pop-up lights face has consistent appeal across all ages.

Lest you are now concerned that all the really nice NA Miatas have entered into decent C5 Corvette territory, there are still deals to be had. This pristine 21,000-mile 1991 Miata sold for $13,125 on Bring a Trailer, proving that, in circumstances where a car's values are rising but not yet stabilized, the number reached by the time the hammer drops is heavily dependent on who's in the room.

More of Barrett-Jackson Houston 2022's most significant are examined in detail on the pages below.